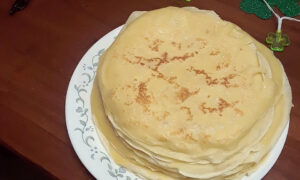 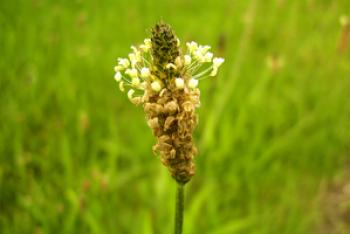 Ribwort Plantain comes from a family of plants that includes 12 different species.

The plant is recognizable by its lance-shaped leaves with parallel leaf veins, and blossom stems that are considerably longer than the pointed leaves. Originally, this plant existed only in Europe but can now be found almost everywhere worldwide. The German name, "Spitzwegerich", means ruler of the roads.

Varying leaf shapes designate the plant varieties and subspecies. The leaves of all of these plants grow from a rosette close to the ground.

Native North Americans called this plant "Footprints of the White Man." According to legend, the blossoms adhered to the settlers' wet shoe soles and its seeds were thus disseminated along the immigrating settlers' routes. But only the broad-leafed version of the plant survives along roads, while the "Spitzwegerich" flourishes primarily in areas where there is little foot traffic.

Those fond of the tasty boletus mushroom can mimic the flavor by adding the flower buds of the "Spitzwegerich." These are tasty in salads, sauces, cooked wild greens, and herbal soups. The buds are used before they open into blossoms, and more than one set of buds can be harvested during a season.

One glimpses the plant first in freshly mowed meadows, as it stretches itself aided by its slender leaves. The ripe seeds of this plant provide a tasty addition to dishes and even contain oil. The tender young leaves are a flavorful addition to salads, when cut with scissors.

Leaves and buds nicely augment an omelet. For that purpose, heat the leaves and buds briefly in canola oil and pour the omelet batter right over them. Cover the pan and let the omelet cook till firm. If desired, turn the omelet over and crisp the other side. Add a salad of mixed greens sprinkled with fresh herbs, and you have a nice, balanced meal.

In addition to being edible, "Spitzwegerich" is also known as a healing plant. It contains substances that soothe congestion. Its other properties are that it acts as an astringent and it is an antioxidant. People in the past welcomed the plant's effects to treat insect bites, fresh wounds, and colds. Insect bites or an encounter with the stinging nettle won't be as painful after bruised leaves are directly placed on the affected areas.