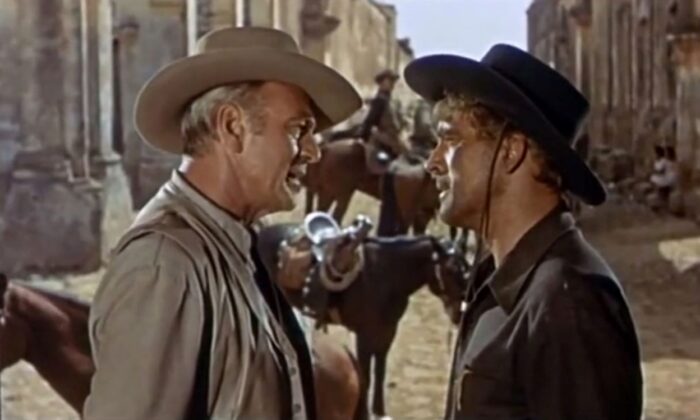 Mexico: the year 1866. The American Civil War has recently concluded, but the Franco-Mexican War is still in full sway. Napoleon III of France plans to establish colonies in the Americas, and to those ends, has established Maximilian Habsburg-Österreich as Maximilian I, the newly minted Emperor of Mexico.

It is against this highly turbulent backdrop that director Robert Aldrich spins his fast-paced Western yarn “Vera Cruz.” The plot revolves around two American gunslingers hungry for adventure and fortune in Mexico. In the film’s opening scenes, we meet Civil War veteran Benjamin Trane (Gary Cooper), who comes across Joe Erin (Burt Lancaster) in Mexico.

A clear distinction is made early on between the more gentlemanly Southerner, Ben, and the ruthless and conniving wild man, Joe.

After lots of gun-wagging (mainly at each other), the two settle into an uneasy alliance, with Ben joining Joe and his gaggle of grubby bushwhackers, which includes Tex (Jack Elam), Donnegan (Ernest Borgnine), and Pittsburgh (Charles Bronson). These are mercenaries who aim to join the Mexican Revolution—fighting to expel the French from their relatively new country. Ben, with motives of his own, hooks up with this bunch, figuring that he’s got better chances of survival with Joe’s outfit, however scurrilous they may seem.

Their initial plan is to locate and join up with Mexican rebel forces, led by General Ramírez (Morris Ankrum). However, after running into Marquis Henri de Labordere (Cesar Romero) and his detachment of soldiers representing Emperor Maximilian (George Macready), they decide that the money that Labordere is offering to employ them is just too good to pass up.

During this encounter, Ben saves the life of a local (and beautiful) pickpocket named Nina (Sara Montiel), who takes a particular liking to him.

After meeting Emperor Maximilian himself at his opulent palace, the roughneck mercenaries—now jointly led by Ben and Joe—show off their gun skills and are hired on the spot to carry out a special mission. They are tasked with escorting a VIP, in this case, the Countess Marie Duvarre (Denise Darcel) to the city of Vera Cruz.

Ben and Joe are more than a little suspicious because of how fast they’ve been entrusted with such an important errand. Nonetheless, the compensation for their outstanding marksman skills convinces them to take the risky job.

A stunning beauty of royal lineage, Countess Duvarre soon becomes the object of Ben and Joe’s amorous intentions. However, since Labordere is already romantically linked to her, the three men take turns trying to win her affections (although she assures Labordere that he has nothing to worry about).

During their journey, Nina shows up and manages to weave her way into the caravan. Eventually, she also weaves her way into Ben’s heart despite his hardened exterior. He’s embittered about losing everything in the American Civil War.

During one of their pit stops, Ben and Joe discover that Countess Duvarre’s carriage is secretly hauling a large cache of gold intended to support the French war effort. When Duvarre and Labordere become aware of the men’s knowledge, the four engage in a deadly game of shadowy intrigue and shifting allegiances, with a healthy dose of backstabbing on display.

As they navigate through the treacherous landscape fraught with rebel ambushes, Duvarre begins to suspect that she’s merely an ornamental distraction for Labordere from the real treasure: the gold. She reluctantly forms a slippery alliance with Joe in the hopes that he’ll bolster her in her increasingly dire circumstances.

Meanwhile, Nina, revealed to be part of the rebellion, breaks through to Ben’s inner goodness, and he decides that a just cause is more important than gold. But will he realize this in time to thwart the many dangerous forces closing in on them?

One of the things that I really enjoyed about this film is that, despite its overall peppy pace, Aldrich used lengthy facial close-ups. Through his director’s lens, we get to fully appreciate the oft-complex expressions of its characters. For instance, Joe’s perpetual grin seems to hide a barely contained malevolence, whereas Ben’s withdrawn countenance speaks to a war-weary man who is looking for a purpose. He has surprisingly humble goals; he wants to make enough money to restore his plantation back home in the South.

Despite some over-the-top action sequences—including legions of men getting mowed down—“Vera Cruz” is a surprisingly weighty film, anchored by strong performances from Cooper, Montiel, Lancaster, and Darcel. It not only carries a positive message about altruistic motives trumping material ones, but should also inspire those curious to learn more about a lesser-known historical conflict—the Franco-Mexican War.