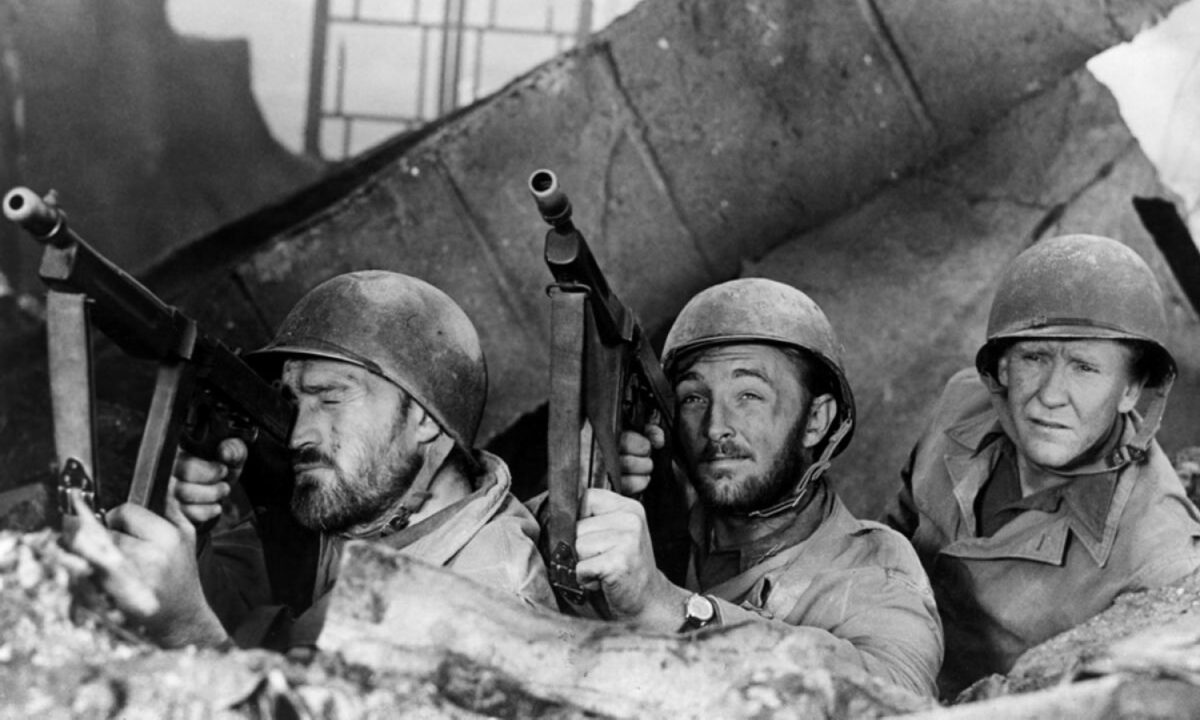 A scene from the “Story of G.I. Joe,” based on the writing of World War II journalist Ernie Pyle. (United Artists)
Film & TV

Rewind, Review, and Re-Rate: ‘Story of G.I. Joe’: An Intimate, Character-Driven Portrayal of Men at War

A little cinematic gem that I discovered recently is the “Story of G.I. Joe,” a gritty and realistic war film that was produced in 1945, toward the tail end of World War II. Part of the film’s realism is due to the fact that it’s based on the real-life experiences of the Pulitzer Prize-winning war correspondent Ernie Pyle.

Directed by William A. Wellman, the film features acting legends Burgess Meredith and Robert Mitchum in his breakout role.

Pyle volunteered to ship overseas and cover the Allied invasion of Europe. He wanted to tell the story of the common Army foot soldier—the American G.I. To achieve this goal, Pyle traversed the same perilous territory, ate the same rations, crouched in the same foxhole as they did, and even ducked some of the same bullets as the soldiers. These actions garnered the soldiers’ respect for him.

Pyle was also respected at home. Embedded with Company C of the 18th Infantry Regiment, he told those soldiers’ stories with the utmost detail and brought the war to those at home. This resulted in Pyle becoming one of the most respected war correspondents of World War II.

The film’s storyline is a relatively straightforward affair. Pyle (Meredith) accompanies the soldiers of the unit from the parched deserts of North Africa to the lush hills and valleys of Sicily and Northern Italy. As he slogs along with the men of Company C, they take action against the Nazis and some of the soldiers don’t survive, which makes quite an emotional impact on the journalist.

As with many of the other soldiers, Pyle befriends the unit’s able leader, Lt. Walker (Mitchum), who leaves the greatest impression on him.

While I’ve seen a lot of war movies over the years, few have so effectively portrayed the brutal, harrowing experiences of the common infantryman in World War II. Director Wellman (“A Star Is Born,” “The Ox-Bow Incident”) crafted a war film that eschews sentimentally and instead is brutal yet very human. It’s as much the story of the mud, blood, and despair that surround the average G.I. as it is one of bravery, self-sacrifice, and determination.

This is a well-made, slow-paced drama that conveys the infantrymen’s banter and humor while also portraying them sympathetically. It captures the soldiers’ idiosyncrasies, motivations, and concerns in a natural way. This is one of the better war films out there and serves as a deeply moving homage to the G.I.s who risked their lives to defend their country.

Fortunately, Mitchum’s outstanding performance made him a Hollywood star and earned him an Academy Award nomination for Best Supporting Actor. The film itself was nominated for a total of four Academy Awards. Meredith was also perfectly cast as Pyle, a likable and respectful journalist who was on the front lines by choice rather than by assignment.

Both critics and war historians agree that “Story of G.I. Joe” is simply one of the most moving World War II movies ever made.