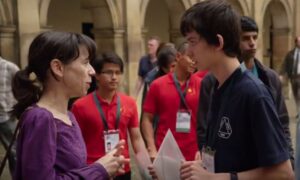 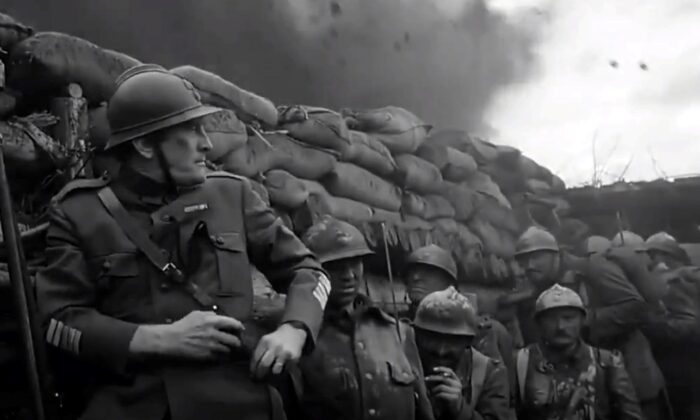 “Full Metal Jacket” (1987) is a modern-day war classic by all accounts. It covers the Vietnam War: Everything from the stressful weeks that men spent in boot camp, all the way to the brutal carnage during the soldiers’ climactic street and jungle battles. But it wasn’t director Stanley Kubrick’s only war-movie masterpiece. There is also one of his earliest works, 1957’s “Paths of Glory.”

The film is set in 1916, right in the middle of the World War I (1914–1918). Germany has attacked France, and after grueling trench warfare on the Western Front, the two world powers have settled into an uneasy stalemate where successes are measured in hundreds of yards.

This stalemate doesn’t sit well with the French army’s general staff. They want to break through the impasse, impose their will upon the Germans, and kick them out of their country.

With this in mind, French Army Gen. Broulard (Adolphe Menjou) pays a visit to his old friend, Gen. Mireau (George Macready), who resides in an opulent French château. Broulard informs Mireau that headquarters is gearing up for a big offensive to break through the German lines. But Mireau tells Broulard that his men are war-weary and in need some good old rest and relaxation.

When Broulard dangles a promotion in front of Mireau—already preapproved by headquarters—he accepts the arduous mission. So hungry is Mireau to add another star to his uniform that he doesn’t waste any time and tells Broulard that his entire division, the 702nd, will be moving out in a mere couple of days.

The only problem is that the 702nd has dug in right in front of a nigh-impregnable German fortress on a hill dubbed the Ant Hill.

Mireau travels to the front lines to the 702nd’s field commander, Col. Dax (Kirk Douglas), who was one of the most revered attorneys in all of France before joining the military. The two men clearly care little for one another, as evidenced by verbal barbs they fling back and forth.

When Dax informs Mireau that his men are already stretched to the limit of their endurance, Mireau chastises him and challenges his bravery. Dax reluctantly acquiesces but knows that Mireau’s orders to storm the Ant Hill will result in severe casualties for his unit; it’s a suicide mission.

In a beautifully heroic scene, Dax walks through the trenches to boost his men’s morale as artillery barrages explode all around them, coating everything in swathes of dirt. His men thus steeled, he courageously climbs out of the trenches and leads his men through “no man’s land,” the wide patch of land between the French and German trench lines.

Ironically, quite a number of men already occupy the place—it’s just that they’re all dead.

When the first wave of the attack is obliterated by the Germans, Mireau orders the second wave, “B Company,” to move in. However, B Company men are hunkered down in the trenches behind French front lines and refuse to budge, citing the obvious—that they’ll end up getting smashed to pieces as well.

When Dax, who barely survived the first wave, runs back to rally B Company, a French soldier’s corpse flies out of no man’s land and collides with him—symbolically drawing the failed assault on Ant Hill to a close.

Mireau is furious with the 702nd’s failure and accuses them of the ultimate military sin: cowardice. At first, Mireau wants 100 men from the unit court martialed for defying his orders. However, the more sensible Gen. Broulard steers Mireau away from his impulsively commanded punishment and gets that severe number reduced to just three—one soldier from each of the division’s three companies: Cpl. Philippe Paris (Ralph Meeker), Pvt. Pierre Arnaud (Joe Turkel), and Pvt. Maurice Ferol (Timothy Carey).

Dax steps in to defend the three men, knowing that if convicted, they’ll be brought before a firing squad. But as the trial begins, he begins to sense that it’s not quite legitimate—more of a farce than anything.

Douglas is fascinating as a man who sticks to his convictions, despite the great risks to his career. Meeker, Turkel, and Carey are poignant in their depictions of doomed men awaiting trial. But George Macready as the monstrous, power-hungry Gen. Mireau is so convincing that he generally steals every scene he’s in, barring, of course, those with Kirk Douglas.

“Paths of Glory” is an excellent war drama with gorgeous sets and outstanding acting. And as an extra treat, it gives us a look at Kubrick’s burgeoning directorial talent.