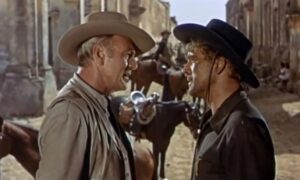 When I first heard about the recent film “Infidel,” I thought that its premise sounded interesting enough. It bills itself as an action-thriller about an American man who is kidnapped after attending a speaking engagement in Cairo, and his wife then attempts to rescue him. I also noticed that it was produced by Dinesh D’Souza, who is not only a filmmaker but also a political commentator.

As a fellow filmmaker, I understand that political persuasions are likely to seep into a cinematic effort, especially when the topic comes from the political realm. That’s a given. But I found this one to simply be unpleasant and subpar as a film. One in which, sadly, Jim Caviezel’s more-than-capable acting skills are wasted.

The main protagonist of the film is an internationally known Christian blogger named Doug Rawlins (Caviezel), who is invited to the University of Cairo in Egypt to attend a speaking conference, a place that Doug describes as “Islam’s seat of learning.”

He further says that the focus of the conference is “not about what divides us, but what unites us.” Oddly, during an internationally televised interview, he says some things that are anything but unifying and offends much of the Muslim world.

So it comes as no surprise that Doug is promptly snatched up from his hotel room in Cairo, and whisked away to a secure location in Beirut, Lebanon, by members of Hamas, which is a Palestinian Sunni-Islamic fundamentalist and nationalist organization. The three men who kidnap Doug are led by Ramzi (Hal Ozsan), a Middle Eastern man with a curiously thick British accent.

Back in the United States, Doug’s wife, Liz (Claudia Karvan)—who holds a high-profile position in the U.S. State Department—is trying to find out what happened to him. From the outset of the film, she is painted as a defiant woman who doesn’t support her husband’s Christian views, his career, nor his passion for spreading the Gospel to the world at large. This is partially explained as being due to the fact that she lost their unborn child during a tragic car accident, sometime in the past.

Liz soon realizes that the U.S. government isn’t exactly keen on helping her cause because of the controversy surrounding Doug’s interview and the current geopolitical situation. Fortunately, she’d already outfitted one of Doug’s shoes with a concealed device beforehand, which allows him to send encrypted emails to her, should something bad happen during his trip. How this device makes it through today’s airport security is another question.

Doug’s captives slap him around a little at first but treat him with a measure of respect, at least for a while. Ramzi even walks Doug out (blindfolded and cuffed, mind you) onto the holding house’s sunny balcony and offers him some Turkish tea. There, Ramzi reveals a little about his traumatic childhood growing up in England where he and his mother were harassed by neo-Nazis, which led him to become a member of Hamas.

This scene stands out as exceptionally insincere—as if I could practically see some production notes that indicated they needed to add a part where they could explain why Ramzi’s character has such a strong English accent, while artificially trying to humanize him. I’m aware that the actor playing Ramzi’s character was raised in the U.K., but his accent is so thick that I had to rewind the movie several times whenever he spoke.

Liz travels to the Middle East in an effort to locate her husband. She dons a baseball cap with her blond hair sticking out and wanders the streets, sticking out like a sore thumb. Why she didn’t bother to hire a bodyguard or two is baffling. Not surprisingly, some bad men try to kidnap her right away.

Liz is saved by members of a house church based in Iran, partly led by Maria Landi (Isabelle Adriani), who proudly exclaims that the church is led by women. The Middle Eastern men present sort of mill around in the background. Oddly, Liz isn’t very appreciative and walks out on them.

Will Liz manage to save her Doug before his captors kill him?

By the midpoint of the film, I really didn’t care. None of the characters seemed sympathetic in the least. The film is also chock-full of today’s cinematic stereotypes: Men are largely portrayed as stupid, ultraviolent, and ineffectual, while women fit into the well-worn archetypes of either strong and arrogant or perpetual victims (or alternate between the two, such as Liz’s character).

You’ve also got your standard Middle Eastern villains that are painted with as much depth as cheap cardboard cutouts. While I’ll give the filmmakers credit for trying to convey a message about violence against Middle Eastern women in the film (a worthy cause), it is delivered in a muddled fashion at best.

Simply put, “Infidel” comes off as more of a bloated, violent, and vulgar version of a Hallmark film, rather than anything more.