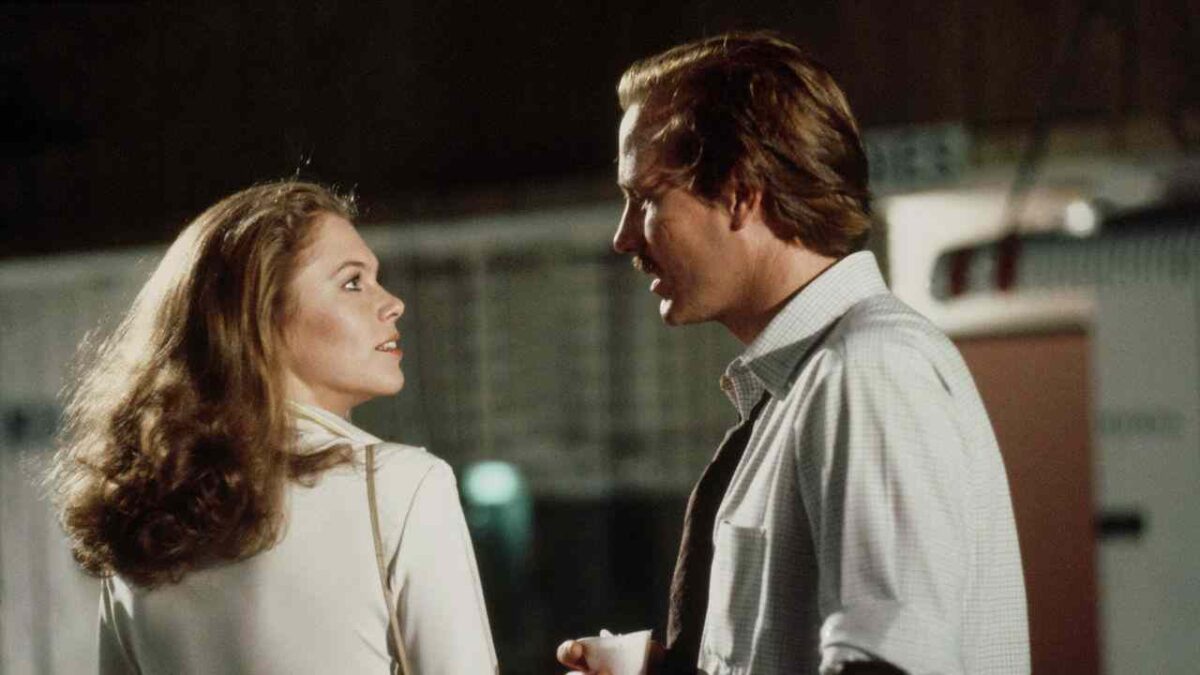 A late arrival to the American New Wave period, Lawrence Kasdan nonetheless cemented his stature in that era by co-scripting “The Empire Strikes Back” and being the solo screenwriter on “Raiders of the Lost Ark,” both produced by George Lucas. So impressed and confident was Lucas with Kasdan’s skills, he vouched for him to Warner Bros. and guaranteed any funding due to budget overages for Kasdan’s directorial debut “Body Heat.”

As with fellow New Wavers Lucas, Francis Ford Coppola, Martin Scorsese, Peter Bogdonavich and others, Kasdan was a huge fan of European film noir and set about to make a modern-day thriller with all of the earmarks and calling cards of the late ’40s and early ’50s.

The first of Kasdan’s many masterstrokes was in casting William Hurt (as Ned Racine) and Kathleen Turner (as Matty Walker) as the leads. It was only Hurt’s third feature and Turner’s first, yet Kasdan immediately recognized their multi-tiered chemistry.

In an early scene at a free outdoor concert, Ned scopes Matty leaving, tails her, and uses a tried and tired pick-up line on her to which she half-heartedly responds. He’s fishing, she knows it, and she in turn baits him with the efficiency of a seasoned angler. They flirt, double entendre verbiage is exchanged, and she states “You’re not too smart. I like that in a man.” He doesn’t get it, but she knows she’s pegged her mark.

The problem arises when Matty discovers she that actually likes Ned and no longer views him as a mere pliable accomplice. He satisfies her (in the biblical sense and otherwise) in a way Edmund never could and she begins second guessing her own plan, but not enough to consider abandoning it.

The crime at the heart of Matty and Ned’s big plan involves arson and, lucky for both of them, one of his former clients (Mickey Rourke as Teddy) is an expert in that particular field. Grateful for Ned’s past legal saves, Teddy goes as far as to offer Ned his services to do the deed, which Ned emphatically discourages.

While doing so, Teddy recites a quote Ned spoke to him years earlier: “There are 50 ways to get caught while committing a crime and if you can think of 25 of them, you’re a genius,” followed by “and councilor, you ain’t no genius.” The love/lust struck Ned doesn’t offer up a retort or reply, just a sheepish glance.

Also in Ned’s corner are deputy prosecutor Peter Lowenstein (Ted Danson) and police detective Oscar Grace (J.A. Preston). While they are professional adversaries of Ned, Peter and Oscar regularly meet with him in social settings and, from everything we see, the three men are close friends who revel in shop talk, gossip, and kibitzing with the staff at the dive diner they frequent.

The murder doesn’t take place at the beginning or the end but rather in the middle and there is no doubt as to who did it or why. The motive was simple and obvious and neither the victim nor the culprit gains our full sympathy, although both receive some degree of empathy because each was duped for different reasons by the same woman.

It is in the second half of “Body Heat” where Kasdan starts messing with our heads with tiny, almost toss away details: the small incidental stuff that law enforcement types glom on to which results in the closing of cases. Despite knowing who did what to whom, and even with significant legal shoe leather sacrificed along the way, the Big Picture isn’t fully revealed until the last two minutes of the film.

There are some viewers who might feel cheated by Kasdan’s pacing and irregular dispensing, or clustering, manner of dropping clues, but this is what separates the film from others of its ilk. The beats of the narrative are irregular and slightly askew. We think we know everything before the halfway point yet are simultaneously overjoyed and flummoxed when we are challenged before it’s all over.

Best known for his work on the early James Bond flicks, Academy Award-winning composer John Barry (“Born Free,” “Out of Africa,” “Dances with Wolves”) was one of 10 candidates Kasdan considered for the score. While Barry succeeded admirably in capturing the desired sultry mood Kasdan was looking for, he didn’t provide much in the way of variety. The same mid-tempo orchestral piece and a slow, saxophone-heavy jazz passage are repeated so often, they border on the annoying.

Atmosphere in any noir thriller is a key component and, like Barry, production designer Bill Kenney simply gives us too much of a good thing. Including far more fog than is ever seen in the state of Florida, Keeney also goes a tad overboard with the smoke machines.

Minor technical quibbles aside, Kasdan’s first feature showed a veteran’s level of assurance and confidence. From the writing to the direction to the character arcs to the crack ensemble performances, “Body Heat” is one of the finest examples of film noir ever made.