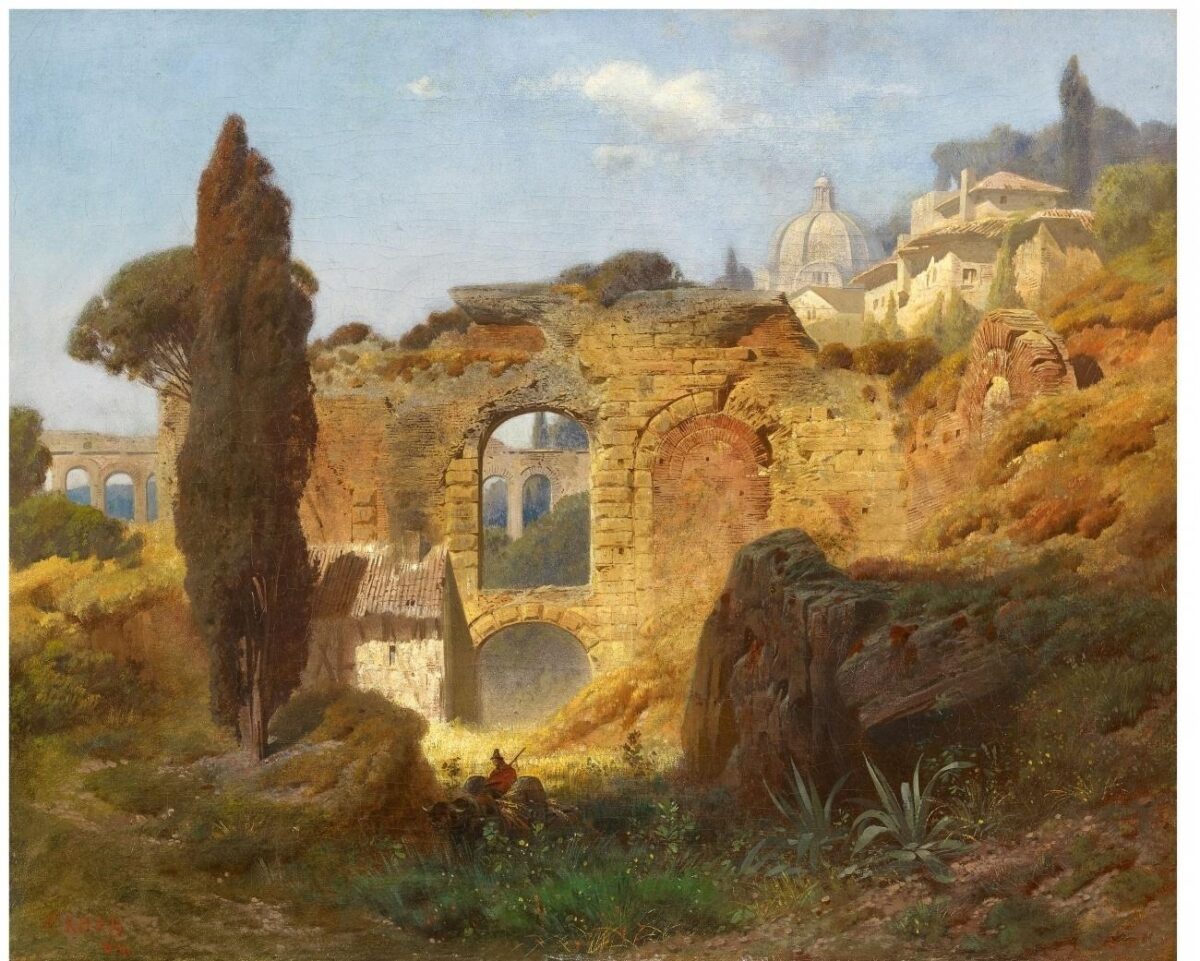 "Taormina," by Ferdinand Knab. This town in Sicily was once part of the Roman empire. (Public Domain)
Family & Education

Reviving the Classics for a Modern World

Once upon a time, an understanding of the ancient past was the hallmark of any educated person in the West. A study of classical authors, including Plutarch and Cicero, was a staple of education that has fallen out of vogue. This course of study is by no means an outdated source without value to us in the modern day; rather, it is worthy of revival.

Our Founding Fathers were steeped in the ancients, and Plutarch was primary among them. I was reminded of this recently when I spied several volumes of Plutarch in the library of Thomas Jefferson’s Monticello. The works of Plutarch were evidently also included in the Franklin family library: Benjamin Franklin wrote in his autobiography, “My father’s little library consisted chiefly of books in polemic divinity. … However, there was among them Plutarch’s “Lives,” in which I read abundantly, and I still think that time spent to great advantages.”

Many of Plutarch’s “Lives” highlight the struggle between freedom and despotism. Men like Jefferson and Franklin were inspired by those who stood for liberty in the face of tyranny in Rome during the time of Tarquin. Undoubtedly, their knowledge of the past led to admiration of a republican form of government, which contributed to the formation of the democratic republic that exists in the United States. The colonists themselves were not unfamiliar with this, as evidenced by the question posed to Franklin regarding what type of government had been formed at the Constitutional Convention. His response was, “A republic—if you can keep it.”

John Adams frequently turned to the life of Cicero for lessons that illuminated the concepts of liberty and natural rights. Plutarch writes, “For Cicero only of all men in Rome made the Romans know how much eloquence doth grace and beautify that which is honest, and how invincible right and justice are.” Cato dubbed Cicero “Father of the Country” for his role in suppressing a conspiracy and protecting the people during a time of tumult. It’s easy to see how the ideas illustrated in the life of Cicero would strongly influence early American statesmen, isn’t it?

Plutarch’s life of Cato the Younger inspired playwright Joseph Addison to write Cato, A Tragedy, which was performed for the troops at Valley Forge during the Revolutionary War in an effort to rouse their spirits. Patrick Henry, famously known for his quote, “Give me liberty or give me death,” echoes lines from Addison’s play, in which the character Cato proclaims:

It is not now time to talk of aught
But chains or conquest, liberty or death.

Politicians continued to be influenced by Plutarch into the 19th century. Former President Harry Truman credits his father reading to him from Plutarch’s “Lives” as his first source of political wisdom. After leaving the White House, Truman told his biographer, “[Plutarch] knew more about politics than all the other writers I’ve read put together. When I was in politics, there would be times when I tried to figure somebody out, and I could always turn to Plutarch, and 9 times out of 10 I’d be able to find a parallel in there.”

But Americans were far from the only people inspired by Plutarch. Classicist C.J. Gianakaris wrote that Plutarch was “for centuries Europe’s schoolmaster.” While imprisoned during World War II, theologian Dietrich Bonhoeffer wrote the following in a letter home: “Father, could you get me from the library Plutarch’s ‘Lives’?” And more than 100 years prior, Napoleon Bonaparte was a great student of the ancient biographer.

For all his faults, Bonaparte was a voracious reader. He had a personal librarian whom he expected to be available to him at all hours, and he traveled with a portable library—among which Plutarch was always found. In particular, he was inspired by the life of Gaius Julius Caesar, and many historians suspect that Napoleon self-consciously imitated some of Caesar’s practices, such as that of dictating to multiple secretaries at the same time, as well as in the art of military campaigns and empire-building.

Historian Will Durant has written of Napoleon that “[he] breathed the passion of those ancient patriots and drank the blood of those historic battles.” Bonaparte so clearly emulated the noble lives he read about in Plutarch that a Corsican rebel leader once said to him, “There is nothing modern in you; you are entirely out of Plutarch.” Napoleon accepted this remark as a great compliment, realizing that he had given flesh to the ideas that had so inspired him.

In 1812, Napoleon’s court painter Jacques-Louis David painted a nearly life-size portrait of him entitled “The Emperor Napoleon in his Study at the Tuileries.” In the lower left-hand corner of this painting can be found the source of ideas that had so inspired Napoleon: a copy of Plutarch’s “Lives.”

Plutarch’s influence can be seen beyond the realm of history and politics, and he is also frequently referenced in literature. The plays of William Shakespeare are an example of how the ideas in Plutarch’s “Lives” inspire heroism and greatness. Shakespeare regularly dipped into the well of the “Lives” to find fodder for his masterpieces. In fact, five of the Bard’s plays used the Thomas North translation of Plutarch’s “Lives” as a primary source for plot and dialogue—sometimes taken verbatim. These include “Coriolanus,” “Julius Caesar,” “Pericles,” “Antony & Cleopatra,” and “Timon of Athens.”

In Mary Shelley’s “Frankenstein,” the monster is influenced by three authors, one of whom is Plutarch. Ralph Waldo Emerson referred to Plutarch’s “Lives” as “a bible for heroes.” Of the “Lives” Louis L’Amour has said, “In several of my western novels I have had characters reading Plutarch. I believe more great men have read his “Lives” than any other book, except possibly the Bible. … In reviewing the reading histories or libraries of great men, I have come upon him again and again, and justly so. His is a sophisticated, urbane mind dealing with aspects of leadership.” Plutarch even makes an appearance in Kate Douglas Wiggin’s children’s classic “Rebecca of Sunnybrook Farm,” in which Rebecca remarks that she has read the “Lives.”

While Plutarch and other classical authors began to experience a decline in influence in the 19th century, they remain relevant to the current cultural moment and are worthy of our reflection. Let us provide our students with tools to navigate the times by exposing them to the wisdom of the ages. Since history tends to repeat itself, doing so will ensure that they are well prepared to face the future.