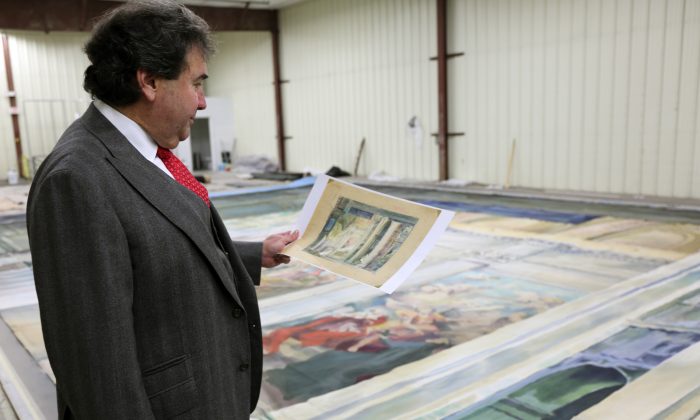 In this undated image released by NYC Opera Renaissance, Michael Capasso, who will lead the reborn New York City Opera, examines drawings used for sets and costumes at the 1900 premiere of Puccini's "Tosca" in Rome. (John Farrell/NYCO Renaissance via AP)
Arts & Culture

Reviving City Opera With a Nod to the Past

NEW YORK — When the curtain rises on “Tosca” at the Rose Theater it may look like a double-dip into the past: a tribute to the launch of the New York City Opera more than 70 years ago, using sets recreated from the dawn of the 20th century.

But the man behind the venture, Michael Capasso, is very much focused on the future.

Ever since City Opera shut down more than two years ago, he’s been working to bring it back to life. Now, thanks to a recent court ruling, he has the green light to try to make it happen.

His production of Puccini’s melodrama will play for six performances Jan. 20-24 at the theater housed in the Time Warner Center’s Jazz at Lincoln Center venue. Alternating casts will include some well-known performers like soprano Latonia Moore and tenor James Valenti, and the production will be based on three watercolor set drawings and 52 costume designs created by the German painter Adolf Hohenstein from the opera’s 1900 world premiere in Rome.

“The curtain is going to go up and people are going to be stunned by how beautiful this is,” Capasso said in a recent interview.

He hopes they’ll also be impressed by his plans for re-establishing a company that then-Mayor Fiorello LaGuardia dubbed “The People’s Opera” when it was created in 1943. In contrast to the mighty Metropolitan Opera, it prided itself on producing more American and recent works, introducing young singers at the start of their careers, and offering tickets at lower prices.

But a series of financial missteps led the company to declare bankruptcy in 2013. Capasso immediately enlisted former NYCO board member Roy Niederhoffer, his longtime friend, in a campaign to convince the musicians, creditors and bankruptcy court that they were the best team to bring it back from the dead.

Capasso sounds optimistic about their chances. “My five-year plan will reinvigorate the repertory, bring it back to the glory days,” he said. “It’s a model in terms of how to program a season that will have widest possible appeal.”

After “Tosca,” he plans to announce three more productions for the coming months, including a piece that composer David Hertzberg wrote on a commission from Gotham Chamber Opera, another company that recently shut down because of financial problems. It’s a setting of Wallace Stevens’ poem “Sunday Morning” for soprano, string nonet and harp.

Then for 2016-17, he promises six productions, some but not all performed at the Rose Theater. One will be “a warhorse,” he said, a crowd-pleasing mainstay of the repertoire like “Tosca,” another will be an American opera “tied directly to City Opera and its heritage,” and one will be a work with a Spanish-language text. The budget for that season is projected to be $6.5 million.

Eventually he hopes to work up to 75 performances a season — still a far cry from the 160 or so the old company gave at its peak.

“We’re not going to expand beyond what we can afford,” Capasso said. “We can’t get caught in that process again.”

Love and Sacrifice at the Opera

His plans are being greeted with doubt in some quarters — not least because another company he helped found in 1981, Dicapo Opera Theatre, suspended operations in 2013 because of its own financial problems.

Marc A. Scorca, president and CEO of Opera America, the national umbrella organization for the industry, said he worries about the viability of a company trying to occupy a niche between the Met, with its annual budget exceeding $300 million, and the more than 40 tiny groups that offer operas throughout the five boroughs.

“It would be wonderful if New York City could support another sizable company,” Scorca said. “But what I have seen and what I hear leaves me with more questions than answers.”

One of those questions is whether it was smart to launch with “Tosca,” an opera the Met just performed 13 times this season, and which the Brooklyn-based LoftOpera plans to stage six times in March.

“Are we correct or merely nostalgic in hearkening back to a ‘Tosca’ of 1944?” he said. “Will people be inspired by this one production to subscribe, to contribute?”

Capasso knows that much is riding on how the initial production is received, and he welcomes the scrutiny from critics and the public.

“We’re under a microscope,” he said. “We know we are, and we prefer it that way.”