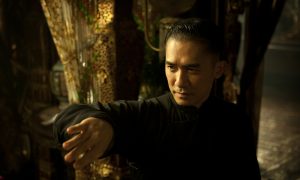 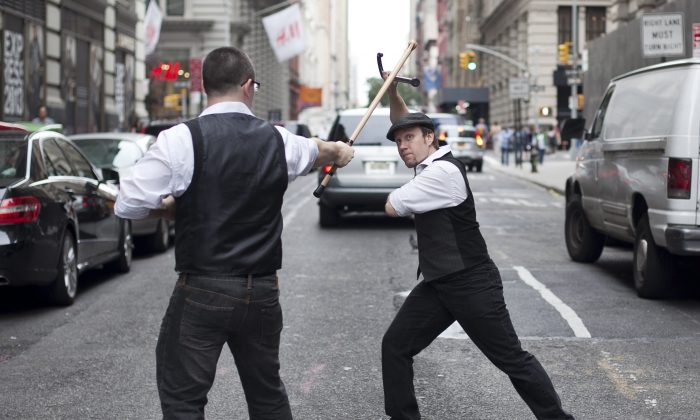 NEW YORK—They are lone warriors forging a path for the revitalization of a lost art of combat. Some travel from as far away as Pennsylvania to New York City every month to train in Bartitsu. It is a 19th century form of martial arts that English gentlemen and ladies learned to defend themselves with walking sticks and umbrellas.

The second closest Bartitsu society is in Chicago, while a few others are scattered in remote places such as New Zealand. Many believe it is worth the long distance travel.

“It’s never going to be like the millions of people who practice karate,” said Rachel Klingberg, who founded the Bartitsu Club of New York City in August 2011. “But once I knew enough people who wanted to learn, I hired an instructor and brought him to New York.”

It began as a modest group of dojo-less students, with varied martial arts experience, training in Central Park once a month.

But as winter threatened to disperse the group, The Society for Martial Arts Instruction took the group in and offered them a dojo.

Today, New York’s Bartitsu club has taught around 150 students, with generally 12 students per class. Most just try one class, while experienced martial artists who have a penchant for science and Sherlock Holmes fall in love with this charming form of combat.

The classes incorporate Neo-Bartitsu, which explores ways to apply traditional Bartitsu methods of fighting with modern everyday tools such as keys, water bottles and cellphones.

“It’s definitely still applicable to modern self defense, except for the walking stick,” Klingberg said.

“Certainly joint locking and [certain methods of] kicking are very applicable, especially for women because it doesn’t require strength,” she said.

Bartitsu is, above all, the art of the small outwitting the strong. “Neo-Bartitsu preserves the idea that if an object is in your hand it can be used for self defense,” Klingberg said.

“Although cellphones are not designed for striking, you can use its corners to apply a lot of pressure. The same can be done with any rigid object in your hand,” said Mark Donnelly, an expert in armed combat who has researched Bartitsu for years.

Neo-Bartitsu is subjective; there’s no documentation. Teachers and students look at black and white photographs to surmise how the late founder would teach it today with modern objects.

That’s where physics and biomechanics come in.

“I’m much more interested in the science than the art. I’ve found that Bartitsu just has loads of it,” said Jesse Barnick, the elected Bartitsu instructor for the New York club.

After each class the students and teachers discuss questions, theories, and ideas such as how using force from a particular part of one’s body adds more power to a strike.

“It’s a little more scientific than my usual approach to martial arts. I come from Tae Kwon Doe and Aikido,” said Joseph Rush, 19, a first-time Bartitsu student who attended a session on Aug 18.

“I will absolutely be coming to more classes,” Rush said. “The teacher is really awesome.”

Barnick has studied martial arts since 1986, and has been teaching since 1996. He is a contract IT specialist living in New Jersey, who also teaches martial arts privately. His students include police officers and ex-military members.

He began studying Bartitsu in 2011, when he met Klingberg in another martial arts class. They were both researching the history and methods of Bartitsu.

When walking canes went out of fashion so did Bartitsu. And it would have remained forgotten if it weren’t for a spelling error Arthur Conan Doyle made in one of his Sherlock Holmes stories.

Some believe that when Arthur Conan Doyle was pressured by monetary gains to bring back Sherlock Holmes from the dead, he flipped through a copy of The Strand, the British magazine where his series was published, and read an article about Bartitsu. But he misspelled it as “baritsu” in his story.

“He dropped a ‘t.’ And it’s funny because that missing ‘t’ is probably the only reason why Bartitsu is remembered today,” Klingberg said. “People read the Sherlock Holmes stories and were determined to find out what it is.”

Bartitsu was founded by Edward Williams Barton-Wright in 1899. It combines techniques from jujitsu and Western ones such as British boxing, kicking, and stick fighting.

Barton-Wright was an entrepreneur who worked three years in Japan and studied jujitsu on the side. He brought two jujitsu instructors from Japan to teach in London.

Hence, the root of the word Bartitsu comes from “Barton-Wright” and “jiujitsu.”

It’s the philosophy of being able to defend yourself in every situation; it was what saved Sherlock Holmes from his fall.

And when the walking canes and parasols went out of fashion, so did Bartitsu.

Klingberg is a full time Web developer, but she hopes to work for the club full time one day. The organization plans on expanding their lessons to a weekly course after Labor Day.

“A lot of what we’re doing is historical. … It’s one thing to read about it in a book, but martial arts needs people practicing it in order for it to survive,” Klingberg said.

The lessons at the NYC Bartitsu Club vary from Victorian calisthenics, to jujutsu locks and defense against grabs, to “bayoneting with parasol” and “how to put a troublesome man out of the room.”

Donnelly leads Bartitsu seminars with the Bartitsu Club of New York City (BCoNYC) a few times out of the year.

“We’re still researching, still connecting the dots. That is the challenge,” he said. “The classes are tests on research, not a living tradition.”