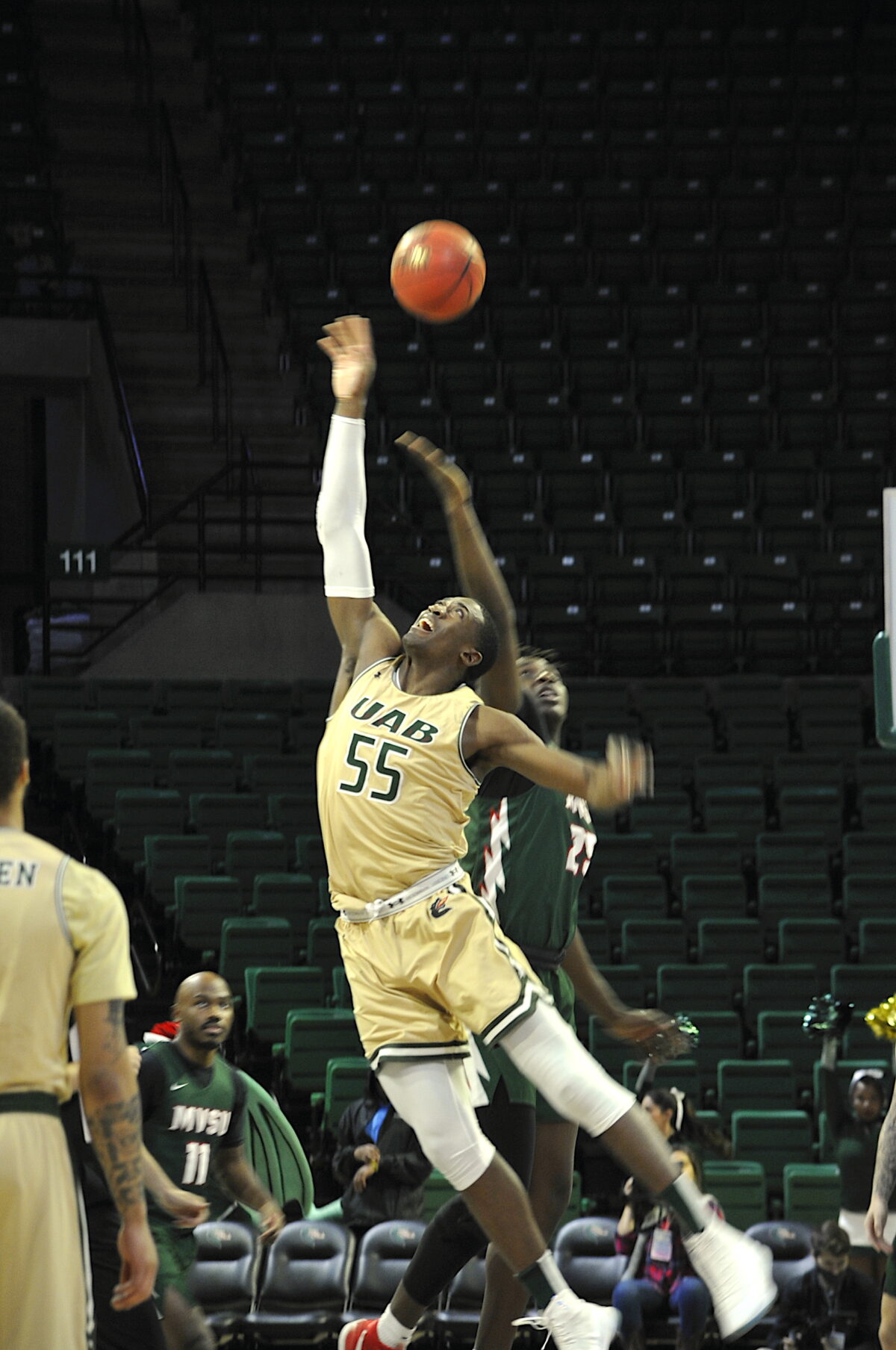 Coach Andy Kennedy’s voice may have risen early in the game between the University of Alabama at Birmingham (UAB) and Mississippi Valley State University (MVSU) back in December 2021. But despite Coach Kennedy’s frustration with his team’s slow start, he still gave off an encouraging attitude.

Coach Kennedy is tall with a youthful look and a commanding presence. His baggy pants and loose UAB shirt do not hide his athletic build, and he strides the sidelines, expecting to win every game. True, most coaches may approach games with a winning outlook, but Kennedy’s eyes tell you that he more than expects. He believes—way beyond the recruiting and practice plans, the stats and records—and far beyond his breast bone.

The University of Alabama at Birmingham was favored to win against unranked Mississippi Valley State, but the game began unexpectedly. MVSU and UAB were neck and neck, and Coach Kennedy shouted at his players to get it together.

“That’s just sports,” Coach Kennedy said after the game, which UAB ultimately won, 100 to 58. “MVSU players were ready, and we were not. We made the necessary adjustments and ended up winning big. That’s what matters.”

Kennedy became head coach at UAB in March 2020. He had played at UAB from 1988 to 1991 and was the second-leading scorer in program history.

Returning to UAB was gratifying and meaningful to Kennedy, “On behalf of my wife, Kimber, and our two daughters, I am blessed to be able to return to my alma mater, in a city that I love, to lead this storied basketball program,” Kennedy had said in a letter posted on the UAB Athletics website.

An official introductory statement from UAB welcoming Kennedy back home had stated, “Remember this day, Birmingham. When we look back a few years from now, Kennedy to UAB might be the moment a university system started to truly heal and win back some respect.”

Kennedy holds multiple school records from his playing days at UAB. In just three seasons, he scored 1,787 points—the second most in school history. He holds the school record for career 3-point field goals made (318). He was also a two-time SEC (Southeastern Conference, a network of athletic teams from southeastern state colleges) Coach of the Year and the winningest coach in the University of Mississippi (where he was previously basketball coach) history.

Kennedy has fond memories of his alma mater: “I played guard under coach Gene Bartow, who is considered the founding father of UAB athletics. We were known for academic excellence, but coach Bartow got us recognized in the sports world.”

Bartow had led UAB to seven straight NCAA (National Collegiate Athletic Association) Tournaments, including advancements to the Sweet Sixteen in 1981 and the Elite Eight in 1982. Coach Kennedy followed suit. In his first season at his alma mater, Kennedy recorded 22 victories, the most for a coach at a new program in 2020 to 2021. Also, the UAB Blazers had 13 Conference USA wins, the most in the league.

“My mission here at UAB is to apply the Bartow Standard, which is winning the conference championship and playing in March Madness,” Kennedy said. “It takes a lot of hard work, but we are looking forward to a good year.”

But with the COVID-19 pandemic, multiple challenges face Coach Kennedy and the entire UAB athletics program. Attendance is not what it should be, and many limitations such as social distancing, vaccines, and testing hang on the sidelines.

“We are dealing with unprecedented challenges due to the pandemic, but we are learning to deal with it and will come through. I will say this: The spirit here at UAB is incredible. The players have a positive attitude, and our fans love the program and we love them. We will continue winning, and our loyal fans will continue supporting us. It may look different, but the healthy spirit will always be there,” Kennedy said.

To have a winning season, Kennedy puts much emphasis on a philosophy he learned early in his career: one of gratitude, perseverance, and awareness.

“Sports teaches everyone lessons,” Kennedy said. “The lesson I regard the most is that you must persevere and be resilient to win. You have to hang in there, especially when things are tough. I want my players also to recognize they have the opportunity of a lifetime and the lifetime of an opportunity. I want them to be aware and grateful, and most of all, persevere to win.”

After winning the game against MVSU and shaking hands with their coaching staff, Kennedy headed back to the locker room with his players. A few young boys were waiting nearby. They shouted, “Coach!” with their hands stretched out. He slowed down and gave every one of them a high five. Then, he and one of the players reached the locker room door at the same time. Kennedy tapped him on the back and let him enter first.