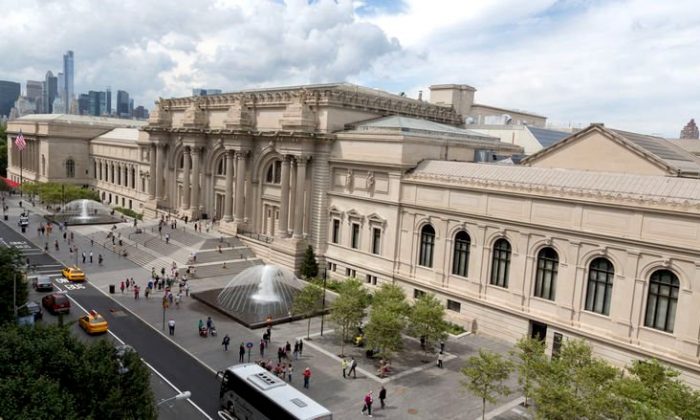 NEW YORK CITY—The largest art museum in the United States and the third-most visited museum in the world is The Metropolitan Museum of Art, which can be daunting for visitors and New Yorkers alike due to its sheer size and number of collections—and, let’s face it, the crowds.

Located at 1000 Fifth Avenue, more than seven million visitors annually enter the museum’s sprawling edifice, which reaches from 80th to 84th Streets along Central Park. With record attendance at exhibits by its Costume Institute Gala and by hosting the annual Council of Fashion Designers of America gala, The Met has succeeded in capturing a new genre of museum-goer and its next generation of supporters.

It was with great pleasure that I recently revisited my hometown museum. But it was Thanksgiving, the museum’s busiest weekend, and I was anxious about how best to immerse myself in artifacts and art representing 5,000 years and spanning all cultures and time periods.

I opted to consolidate my visit with a stay at a posh uptown hotel called The Mark, located on Manhattan’s Upper East Side and close enough that I could enjoy a late afternoon cocktail at the hotel’s swanky bar and then return to the museum in the evening to visit any remaining exhibits. The Met is open Saturdays and Sundays until 9 p.m.

While planning my visit, I came across an abundance of free tours in different languages offered daily, which I never took advantage of during previous visits. These tours are led by highly trained volunteer docents and the museum’s staff; I chose the guided tours to re-acquaint myself with The Met—and its treasures!

But first, for nostalgic reasons, I revisited the Arms and Armor wing, which takes visitors past the refreshed Greek and Antiquities wing. When I was growing up, my dad and I frequently toured the Arms and Armor section on Sundays. The life-sized horses and riders in armor looked as menacing as I had remembered them. This time, however, I noticed the dazzling gilded and bejeweled sword handles from Germany’s Saxony region, which military men wore to their fancy-dress events.

Back at the entrance to join the “Arts of the Islamic World” tour, our group was welcomed by Charles Mayer, an art historian whose energetic personality and vast knowledge made this an outstanding tour.

The next tour was what most people would call “old hat” but it was worth dodging the throngs of visitors to get a close-up look at works under the topic “Impressionism and Post-Impressionism.”