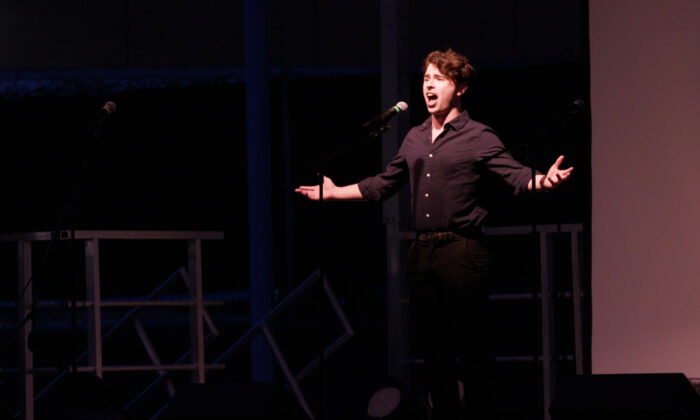 While some of the larger theaters in Chicago stage musicals as spectacular extravaganzas in mammoth auditoriums, Porchlight Music Theatre has created a reputation for its revivals of Broadway shows offered in a more intimate setting. This practice allows for patrons to feel closer to the action on stage. Another hallmark of a Porchlight production is presenting new talent. Both of these commitments are now on display in the theater’s streaming showcase of “New Faces Sing Broadway 1979.”

As an imaginative way to combine musical revivals and introduce new artists at the same time, Porchlight presents the show as an outdoor concert in the parking lot of the North Shore Center for the Performing Arts in Skokie and then films the event for a larger audience.

Directed by Brianna Borger, the revue features 10 new performers who sing a medley of songs from 21 Broadway musicals of 1979. Borger selected the songs and wrote the script for Alexis J. Roston, who narrates the production.

It’s an eclectic selection. Some of the songs and shows are as popular today as when they first appeared 42 years ago in New York, while some have been forgotten.

Even the shows that didn’t fare well at the box office do have some charming songs that are worth a listen, especially in the way the talented “New Faces” ensemble delivers them. These promising songbirds include Micah Beauvais, Adia Bell, Chloe Belongilot, Wesly Anthony Clergé, Haley Gustafson, Drew Mitchell, Mia Nevarez, Laura Quinones, Christopher Ratliff, and Nathe Rowbotham.

The musicians who support them—Linda Madonia, music director on keyboards, Marcel Reimao Bonfim on bass, and Justin Akira Kono on drums—contribute to the exuberantly clear sound of the production.

Among the shows presented from 1979 are those that bombed at the box office. “The Grand Tour” featured Jerry Herman’s music and starred Joel Gray. (Herman composed the music for hits like “Hello Dolly” and “La Cage aux Folles.”) Even with those Broadway giants, the show closed after 61 performances. It did, however, have one good musical number, “Marianne,” which gets a mellow rendition from Christopher Ratcliff.

Another Broadway flop was “Carmelian.” With lyrics by Alan Jay Lerner (“Brigadoon,” “My Fair Lady,” “Camelot”) and music by Burton Lane, it revolves around an Italian woman raising a teenage daughter who doesn’t know which of the three soldiers her mother dated is her father. The plot is similar to “Mamma Mia!” which opened in 1999 and which, unlike “Carmelina,” was a huge success. The failed musical did, however, have one lovely song, “One More Walk Around the Garden,” which is well harmonized by Nathe Rowbotham, Micah Beauvais, and Christopher Ratcliff.

While it wasn’t a big hit, “They’re Playing Our Song” did alright at the box office. Based on the real-life relationship of Carol Bayer Sager and Marvin Hamlisch, the show was written by master playwright Neil Simon and starred Lucie Arnez (in her Broadway debut) and comedian Robert Klein. Adia Bell and Drew Mitchell portray the characters from the show and complement each other in the romantic “When You’re in My Arms.”

Other musical numbers of note that were reprised during the 90-minute variety montage include “Hard Candy Christmas” from “The Best Little Whorehouse in Texas,” sung by the ensemble; “Tell Me” from “A Broadway Musical” with a velvety smooth style by Micah Beaumais; and “I’m Shootin’ High” from “Sugar Babies” by a dulcet-voiced Laura Quinones.

One of the shows presented, “Evita,” has a most unlikely story, but was very successful. That’s not only because of Andrew Lloyd Webber’s engaging musical score, but also because director Hal Prince’s stagecraft was dramatically stunning. Mia Navarez comes through with a wonderful rhythmic “Buenos Aires.”

Other charming tunes include the talented troupe belting out “I Won’t Grow Up” from the 1979 Broadway revival of “Peter Pan,” starring Sandy Duncan and “The 1940’s Radio Hour” with a swinging “Boogie Woogie Bugle Boy,” performed with strong vocalizations by Chloe Belongilot, Laura Quinones, and Mia Nevarez.

The highlight of “New Faces” though is the ensemble soaring with “Get Me to the Church on Time” from “My Fair Lady.” Its selection is somewhat of a slight-of-hand because the production opened on Broadway in 1956. It garners a spot in the concert because it was part of “Lerner and Loewe: A Very Special Evening” presented in 1979.

Musical theater fans will love “New Faces Sing Broadway 1979,” not only for its delightful celebration of Broadway shows, but also for its roster of golden-voiced artists who we will, no doubt, see and hear from again.