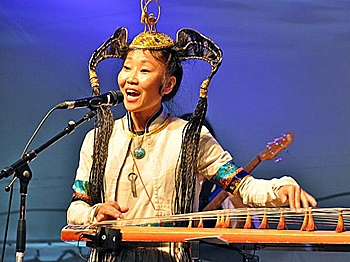 BY David Bohatyretz TIMEAugust 17, 2010 PRINT
As dusk settled on Saturday August 14, Namgar thrilled the crowd at the Ottawa Folk Festival with its amplified versions of traditional folk songs.

Namgar (“white cloud” in Tibetan) was founded in Buryatia, a republic of Russia, by Namgar Lkhasaranova, from whom the band takes its name.

Possibly among the most obscure bands to appear in festival history, Namgar was well-received in the capital city, as it was nights previous in Vancouver, where it sold the last of its CDs. For this reviewer this came as a blow, which was softened greatly however when Bulat Gafarov, the violinist, gave me his own disk, which features an intriguing blend of hand percussion, strings, and vocals.

Namgar does to Mongolian folk music what Fairport Convention did to British folk. The use of traditional Mongolian instruments, such as the chanza (3-string lute), morin khuur (2-string bowed instrument), and the yatag (12-string zither), mixed with the electric bass and drumset constitutes a compelling blend of ancient and modern sounds.

So far, the group has produced two albums: Hatar, mainly folk music, and Nomad, a fusion of traditional folk and rock.

Namgar’s repertoire is stocked with the nomadic songs of the Buryat, once a wandering tribe of the Mongols. The band hopes their efforts will preserve the ancient culture, language, and nomadic songs of the Buryats. Leader Namgar says that the band has attracted a larger and younger audience due to the integration of rock with indigenous music. She adds that at home she prefers to play the pieces acoustically.

The leader’s traditional Mongolian clothing, stunning headdress, graceful movements, and exotic vocals enthralled the audience. While the sounds from a modified electric 4-string chanza and yatag harkened to Mongolian music, the electric bass and drumset delivered a decidedly western groove.

On one song, Gafarov simultaneously played Jews harp while throat singing—a difficult feat. He said it took him a year to perfect the technique. The blend of the Jews harp with the delightful harmonics of which the human voice is capable was a high point of the evening. Later, Gafarov performed an astonishing solo, using djembe (hand drum), flutes, mbira (thumb piano), and his amazing voice. This musical juggling act prompted the audience to explode in appreciative applause.

Unfortunately, while the band’s recordings feature the stringed Morin Khuur, the most traditional and ancient of Mongolian instruments, it was nowhere to be seen—or heard—on stage at the Ottawa festival.

The tone, akin to that of a cello but more bassy and haunting, is in my opinion critical to Namgar’s recorded sound, and I would have enjoyed hearing it live. Its absence, which marred an otherwise spirited performance, could be compared to if Alan Stivell decided not to bring his signature Celtic harp to a prominent engagement.

Similarly, while the drummer and the bass player were competent they didn’t light any fires. However, they kept steady time and managed to flex. I would have appreciated hearing some percussion, particularly bells and gongs, augmenting the tones of the conventional rented drumset.

After the performance, when asked about the missing instruments Gafarov said, “I do have a Morin Khuur at home, but it’s too bulky to carry on tour and we’re limited by airlines in what we can bring.”

Judged in this light, Namgar did a credible job with limited resources. At times during the performance, the combination of Buryat lyrics and melody seemed to conjure up visions of nomadic Mongols gathered around camp fires. Indeed, at one point, Gafarov’s violin evoked the sound of horses galloping across the Steppes. There were many such moments.

Namgar’s set was a moving experience—a rare vista of visual and auditory splendour.