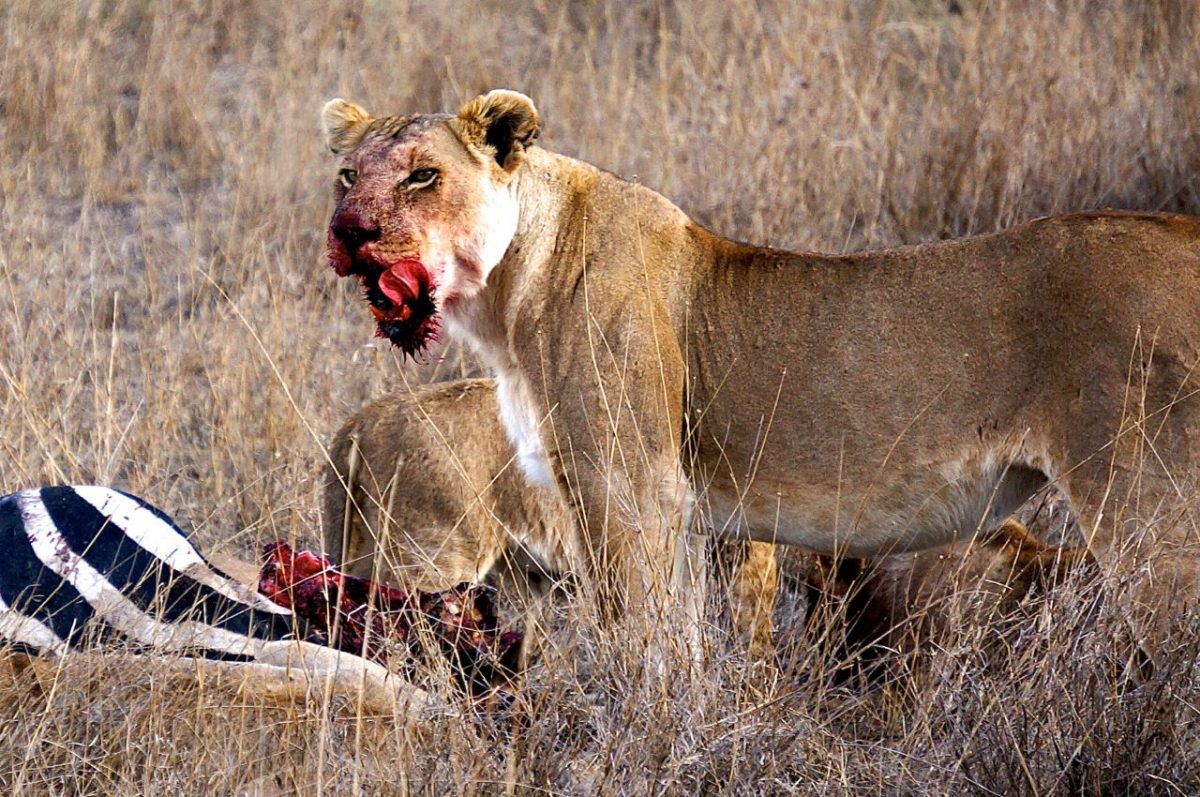 Return To The Serengeti

It was time to return back to one of the best places for wildlife, the Serengeti. This was a particularly gruesome visit, and as if to forewarn of the carnage ahead, a big dust-storm hit the vehicle upon arrival at the gates. With visibility only a few metres, there was no choice but to wait for a respite.

The Serengeti was all dried up waiting for the rains to come, which meant excellent conditions for wildlife spotting. The dust storm clearing up it was time to get going, and after just thirty minutes, you came across three lions right next to the road, one of them a male tearing into a zebra with its mighty jaw.

Watching hyenas circling in the background with the fading light, it was time to make fast to the campsite before dark. Just several minutes further on, four hyenas were ripping into a zebra also next to the side of the road. It was almost as if the wildlife were putting on a show for you as you entered, as if to say ‘welcome to the wild-side’!

The zebra appeared to have died naturally during pregnancy, you could see the massive belly with the unborn calf inside. The hyenas jumped all over the zebra, shredding into its genital area to get at the dead baby. One hyena was successful and the dead baby popped out of the zebra, spilling fluids everywhere. The hyena carried the baby of to feast on by itself.

Then one of the worst smells I have ever known hit us. The hyenas had torn into the lower abdomen, and its bowels burst everywhere. The smell was simply horrendous, making the decision easier to leave and to get to camp.

On the way out a jackal tried to get the baby zebra away from the hyena, but the hyena chased it away easily. Then a male lion raced out of nowhere to the scene and chased the hyena away, to claim the dead baby as its own, carrying it off in triumph. What the hell next, we thought to ourselves, this was an amazing wildlife spectacle.

We stayed at the pre-named ‘death camp’, from a previous to the Serengeti a few weeks earlier. This time around an elephant wandered through the camp during the night, crashing around by the toilet area, and hyenas encroached into the camp, with their cackling laughs.

Waking up to the cool morning air, you grabbed a quick bite to eat, before once again heading out in the vehicle.

This time it was more lions, with a dead zebra at the side of the road. Slashing open its head and exposing the ribs, the adults and cubs together feasted. Carnage ensued, the adults getting a good fill of fresh meat, blood splattering their coats.

You can see the half remains of the zebra on display as you drive away from the scene, lions looking on delighted. This was definitely one of the bloodiest safaris I had ever been on, a truly gruesome display of hunter and hunted, and was spectacular to witness nature at its rawest.