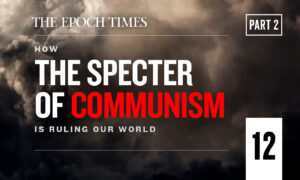 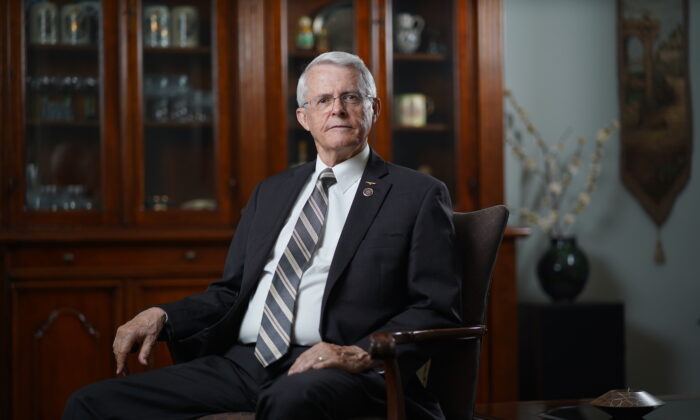 A Vietnam War veteran and former Virginia state senator is at the center of a new battle: pushing back on domestic communism in the United States.

After 16 years in the Virginia House of Delegates and Virginia Senate, Sen. Richard Hayden Black withdrew from the office in 2020, but not the community. On June 22, he spoke at a school board meeting in his county of residence, Loudoun County.

The county is west of Washington, D.C., where liberal-leaning northern Virginia and the more conservative parts of the state meet. It has become ground zero for the fight against critical race theory (CRT), a variation of Marxism that interprets society through the lens of racial class struggle and sees inherent racism in the foundations of Western societies.

Black’s self-introduction caused a stir in the crowd. A sense of respect and anticipation arose in the air. People knew him and burst into louder and louder cheers as he criticized school board members for suppressing freedom of speech by encouraging an enemies list to punish CRT opponents.

He moved on to condemn the proposed transgender policies, which allow boys who self-identify as girls to use girls’ bathrooms and locker rooms. The crowd cheered more, and many stood up to express their agreement.

Immediately, the school board members voted to end the public comment period and retreated from the dais, making Black the approximately 50th and effectively the last speaker out of 289 total registered. As he was walking toward the exit of the boardroom, many approached him to thank him and shake hands with him.

Defending freedom isn’t new for Black. He spent 32 years altogether in the U.S. Marine Corps (rising to the rank of colonel) and the U.S. Army JAG Corps, the legal arm of the U.S. Army. He holds three Legions of Merit, the Purple Heart Medal, the Navy Commendation Medal with “V” for Valor, the Combat Action Ribbon, and two Presidential Unit Citations.

The last time he was face-to-face with communism was in Vietnam. “Lord, if this is it, I’m ready. But if not, I won’t forget,” Black said his shortest prayer ever in a rice paddy near Hoi An, Vietnam, in 1967. Mortar shells whistled by, landing closer and closer to where he took cover in the mud. One more would have hit him.

He survived, and he didn’t forget.

In 1966, on a flight to bring in supplies to a South Vietnamese encampment, Black flew over a village. All of the people in the village had been beheaded. “The mothers, the fathers, everybody, their heads were on poles. There was just enormous brutality and cruelty. It’s not that the United States didn’t make mistakes in Vietnam, but anyone who thought that we were on the wrong side does not understand the evil of the people who took over there.”

Many years later, in 2012, Black met with generals and senior officials of the government of South Vietnam; all of them had been imprisoned in concentration camps after the communists took over. They spent a large part of their lives in those camps, anywhere from 13 to 26 years. They said about a third of all the people in the camps died there.

In some camps, the men would just be stripped naked and sent to the jungle to forage for grubs, insects, and earthworms. And if their wives knew they were in that camp, the wives would want to bring them food. The only way they were ever allowed to bring food was if they would submit to rape by the camp guards. “So, you can imagine what that put the wives through. The choice of watching their husband starve to death or submitting to rape is just so fundamentally evil,” said Black.

One official from a Catholic village recalled that, after Saigon’s fall, the communists tracked down the parish priest and took him to the center of the village. They forced all of the people from the village to come and watch. Then, they lit the priest on fire. They burned him to death as a way of saying, if you’re a Christian, this is what happens to you. You’re next.

In Black’s view, communism became a religion, and that’s why it excluded all other faiths.

Black returned to the United States in 1967 and saw America going through “disturbing” changes. He had worked in the reptile industry in Florida before leaving for Vietnam. While enjoying the solitude of the swamps as he used to do, he saw teenage girls hitchhiking down the road after midnight.

“It symbolized the coming collapse of American culture,” said Black, adding that although he saw it in Florida, it was happening across the nation. “It was sort of this free love, drugs, and sex era that came out of the Vietnam times. And so that was the first that I started seeing the unraveling of America, America’s culture. It’s not necessarily the only one. For me, I was 22 when I came back from Vietnam, and I found it troubling.”

Black studied at the University of Florida–Gainesville, where he found that the Soviet Union had infiltrated the anti-war movement and was using it for its own ends. Eric Dittis, a fellow student and head of the Student Mobilization to End the War, mobilized thousands of people and sent them to Washington to protest.

Black said he and Dittis shared an odd friendship as they were both ideology-driven, albeit very different ideologies. He asked Dittis where he got the money to organize such big demonstrations. Dittis shared that his organization was almost entirely funded by the Soviet Union.

Black said Karl Marx, the original author of communism, anticipated uniting peasants against landowners and capitalists. However, when communism was implemented in Russia, communists discovered that workers were easier to organize. Every culture has this friction over fault lines that communists seek to exploit, said Black. “During the days of the Soviet Union, they always recognized that race was a dividing point.”

“The cultural changes, the moral changes, are sort of the underpinnings for everything. It’s the foundation. But what I’m seeing is that we’re taking away the foundations of a stable country and that I am watching communism spreading at a breakneck pace because communism always attempts to seize power by creating divisions.”

“It has reached an incredibly dangerous point at this time, where we honestly risk the fragmentation and disintegration of our culture. I can’t tell you that I’m sure that the United States will exist as a cohesive nation 20 years from now. I can’t say that,” said Black.

“We are in a situation today where the communists back when I was in college realized that the fissure in American society was a racial one. And they’ve worked very hard to exploit that. And at the same time, they recognize that to collapse society and bring about a communist revolution, they have to also take out all of the moral underpinnings of society. And this is what we see being done.”

His speech at the June 22 Loudoun County School Board meeting was one of his efforts in pushing back domestic communism. At the age of 77, Black is still fighting. “If I doubt that America is going to hang together for 20 more years, and my grandchildren are going to be young men and women 20 years from now, they’ve got to live. I want something left of this country. That makes it worthwhile.”