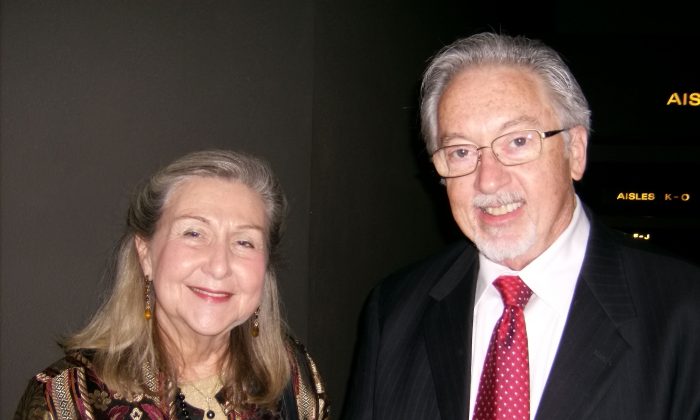 SACRAMENTO, Calif.—Sometimes a small token of love can transcend its perfunctory obligation and blossom into a gift of compassion. That’s what retired Sacramento Bee reporter, James Lewis, discovered after attending Shen Yun’s Jan. 14 matinee performance at the Community Center Theater with his wife Jan; a gift he purchased her for Christmas.

It takes a lot to impress a former journalist anchored in a city of lawmakers, where high-profile galas are the norm. But Shen Yun managed to do just that.

“Superb,” Mr. Lewis reiterated. “The story is worth coming to see because you get history along with the skillful performance of the dancers.”

Mr. Lewis was particularly struck by the opening scene. “The very first opening number was beautiful, [about] the creation. That was very impressive to me. I liked that a lot.”

His wife Jan Lewis, a retired dietician at the California Departments of Health and Education, concurred. “Yes, that was really beautiful. And I loved the message of tolerance and compassion and truth.”

She added, “Striving for truth is a message that particularly the soloist is bringing into the songs.”

It’s no surprise Mrs. Lewis felt the message of truth so deeply in the lyrics of the soprano soloists considering their profound spiritual roots. Shen Yun’s website explains: “Brimming with philosophical reflection about human life and containing deep layers of meaning, the texts go beyond the boundaries of nation, race, and culture. … Some audience members even express that Shen Yun’s vocal pieces are reminiscent of sacred music.”

“I get the message,” added Mr. Lewis. “I think that the legends are lovely; the various stories that go along with the dances I think are very informative about Chinese history. So I’m enjoying that a lot.”

In parting, the Lewises had these words to share about Shen Yun:

“It’s a fantastic show. We are totally enjoying it,” said Mrs. Lewis.

“It has great variety and the performers are so skilled. It’s colorful, has such great costumes, and the dancing is so precise,” said Mr. Lewis.

“All in all it’s a wonderful performance,” he said.

With reporting by Lily Yu and Chun Lee