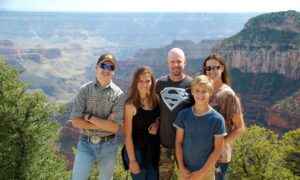 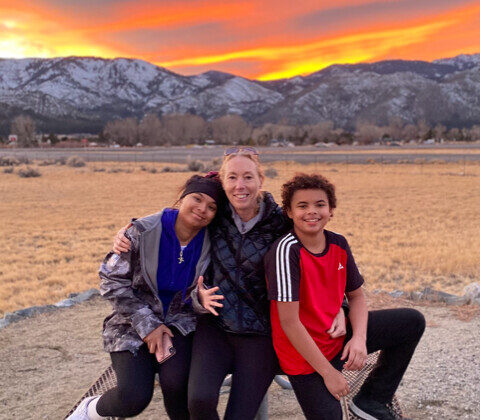 When Dr. Karen Gedney started mentoring the children of incarcerated parents ten years ago, she was surprised at how chaotic their lives were. “They were bouncing from one place to another,” Gedney said. “Their breakfast was soda and a Cheeto-like substance. They were sleeping in other people’s apartments under the kitchen table and they were surrounded by members of their family who were violent and involved in criminal activity.”

Gedney was introduced to the task of mentoring these children while treating inmates at the Northern Nevada Correctional Center, a men’s prison, from 1987 to 2016. She also treated inmates at the nearby Stewart Conservation Camp, a minimum-security facility. Together with her husband, Clifton Maclin, who is now deceased, they mentored five children through the Big Brothers Big Sisters organization. “The three oldest have completed college and I continue to mentor the two youngest who are siblings, Jalyssa and Dante,” Gedney said in an interview. “We realized that to make a significant difference we had to mentor children at risk, especially the ones who had no father, or a father in prison.”

At the end of 2020, some 1,249,300 people were incarcerated in state and federal prisons, according to data from the Vera Institute for Justice. “Just like medicine, we need a society that helps prevent people from spinning into the criminal justice system, and one of the biggest bang for the buck is the youth because you still have a lot of leverage in the direction they’re going,” Gedney said. Today, Jalyssa is 17 years old and Dante is 13 years old. While their father has been incarcerated most of their lives, their mother was reportedly having a hard time providing housing and food for them.

“She was going from one bad housing situation to another and the little kids were suffering from the consequences of being exposed to poverty, violence, and drugs,” Gedney said. “Jalyssa and Dante were exceptionally bright and talented, like flowers but planted in the wrong environment.” When Gedney picks them up on a Saturday or Sunday every week, she said the siblings don’t want to go home at the end of the day. “If people really want to do something in terms of helping society be safer and more equitable, then they definitely should consider mentoring children of the incarcerated,” she said. “It will enrich their lives.”

Gedney authored a book about her years treating inmates as an internal medicine specialist called “30 Years Behind Bars: Trials of a Prison Doctor” (2018). “I wrote it to increase awareness and broaden the hearts and minds of the public when it comes to the incarcerated and prison reform,” Gedney said. One of the most harrowing experiences happened during her second year when Gedney was held hostage, assaulted and raped by one of her Northern Nevada Correctional Center patients.

“I was rescued 10 hours later by a SWAT team that threw in a concussion grenade after they sledge hammered a hole through a kick out panel in the wall,” she said. “Seeing the inmate be killed by the SWAT team affected me emotionally, and made me doubt myself. I had to deal with shock, anger and then find forgiveness.” Ultimately, the experience increased Gedney’s resolve to help and make a difference.

“The reason I decided to stay was because I knew there were workers in the system who didn’t want me to help the inmates or to be a voice against abuse,” she said. “To this day, I believe there were some correction officers in there who allowed me to be taken hostage because they wanted me dead.”

Although now she is retired, Gedney continues her efforts to assist the prison population by sitting on various boards, such as Ridge House, which facilitates transitional housing in Reno, and the Nevada Prison Education Program. “I donate $500 to the Western Nevada College every year, which is the institution in my city that is responsible for providing higher education in the prison system,” she said. “I designate that the funds be used for someone who is incarcerated or formerly incarcerated as a scholarship.”

Deb Conrad is director of the Higher Education in Prison Program (HEPP) at Western Nevada College (WNC) where 150 incarcerated or formerly incarcerated individuals are enrolled at any given time. “Many people who are incarcerated go in with less than a high school education and if they do not receive any education or other kinds of skill development while they are incarcerated, when they come out, the recidivism rate is very high,” Conrad said.

According to data from the Office of Disease Prevention and Health Promotion, some 7.6 million people are released yearly nationwide but 2 out of 3 are arrested again within 3 years and more than 50 percent are incarcerated again. “If incarcerated and formerly incarcerated people don’t have a way to become productive citizens in their communities, good neighbors and to reconnect positively with their families, that makes the communities less safe,” Conrad said in an interview.

One of the obstacles WNC faces when fundraising for HEPP is the stigma that the incarcerated shouldn’t be gifted with a free education because of past offenses for which they are serving or have served time to society. “When incarcerated people come out and have an education coupled with a true desire to change their lives, do better and not go back to their former lives, they are a great source of untapped talent,” Conrad added. “We also serve people who have life without parole sentences because they deserve an education, too.” Donations can be made payable to the Higher Education in Prison Program at Western Nevada College, Bristlecone Building, 2201 West College Parkway, Room 140 in Carson City, Nevada, 89703. “About 97 percent of our incarcerated students get a C-minus or above but I can tell you that most of them are getting a B-plus or above and that outperforms their peers at WNC where only 80% of students on the outside are getting a C-minus or above,” Conrad said.

Juliette Fairley is a graduate of Columbia University’s Graduate School of Journalism. Born in Chateauroux, France, and raised outside of Lackland Air Force Base in Texas, Juliette is a well-adjusted military brat who now lives in Manhattan. She has written for The New York Times, The Wall Street Journal, TheStreet, Time magazine, the Chicago City Wire, the Austin-American Statesman, and many other publications across the country.