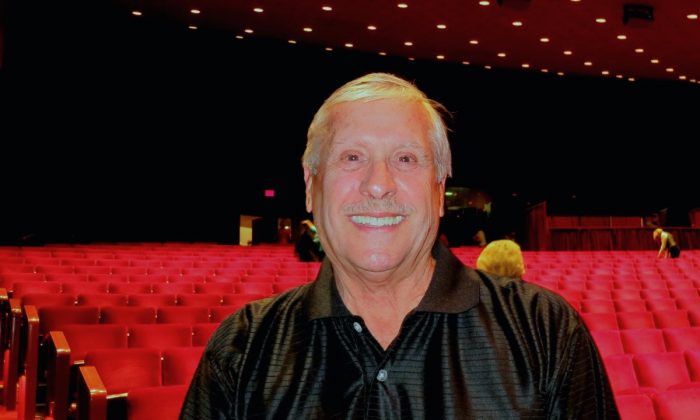 Ron Biagi, a retired banker, at the Costa Mesa Shen Yun performance on Jan. 31 at Segerstrom Center for the Arts. (Lu Rusong/Epoch Times)

Mr. Biagi is now retired, but had a long career with Bank of America, serving as the CEO and Chairman of the Board in Texas and New Mexico, respectively.

He said he also found the performance to be a great learning experience, a lesson in China’s long history.

“I thought it was very interesting. I did not know a lot of the histories, or ethnic dances of the culture of 5,000 years that China is so proud of. So I learned a lot,” he said.

It is Shen Yun’s mission to revive this culture, using, as Shen Yun’s website explains, “Sophisticated dance techniques, an orchestra joining instruments from both the East and West, beautiful costumes, and a stunning back drop—this is Shen Yun at first glance.”

Shen Yun compresses China’s heritage into a single performance by telling many stories, and through approximately 20 vignettes, each no longer than 10 minutes, audiences are taken on a journey of myths and legends where they see celestial kingdoms, vast, rustic landscapes, and elegant, ancient gardens. “Whether set in the past or in contemporary China, every dance embodies traditional Chinese values.”

Of Shen Yun’s stories, he said, “I think they’re rich in tradition and the values have stood the test of time.”

“It’s the tradition of respect, compassion, [and] integrity that they were trying to display and explain to us,” he said. “That was probably the most important to me.”

Jim Large and Kim Mills both found the night’s performance to be quite enjoyable.

Mr. Large, who works in aviation, considered the show to be truly unique, and during one of the dances Ms. Mills, an accountant, said she couldn’t help but shed tears at what she saw.

“I think the message we got was, we need to be more compassionate,” said Mr. Large. “The dancers, the message, all of the talent—it was just great.”

Also in attendance were Nestor Corrales and Ronda Schneider. Mr. Corrales is retired, but he worked as a television engineer for Walt Disney, and Ms. Schneider works in education.

They both enjoyed the animated backdrop, which complements all the dance pieces. In some of the pieces, the dancers interact with the screen, appearing to leap into the sky or fall from the heavens and suddenly appear on stage.

The tales told through the dances were a favorite of Ms. Schneider. “The stories were phenomenal,” she said.

Ms. Schneider was particularly taken by the spiritual nature of the show, noting how it centered on heaven, humanity, strength, and compassion.

“It was just pure and so right on,” she said. “Very spiritual. Very lovely.”