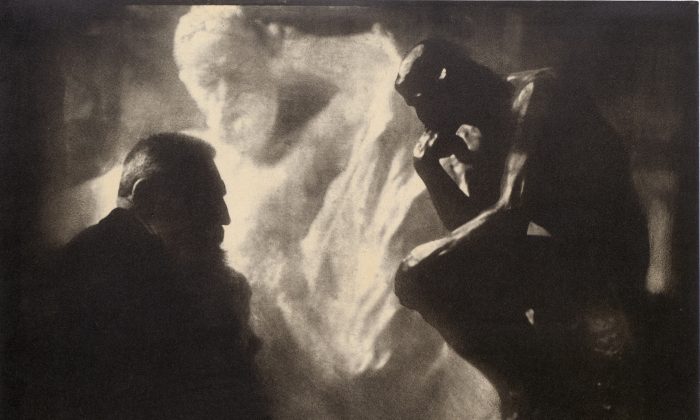 ‘Rodin at The Met’ Celebrates a Centennial
By Milene Fernandez
Print

NEW YORK—If you were asked to imagine a sculpture, you would likely conjure an image of a robust man sitting on a rock, hunched over with his right elbow digging into his left knee, his chin resting on his right hand, his eyes downcast—that iconic work by Auguste Rodin (1840–1917), “The Thinker.” This year marks the centennial of Rodin’s death, giving us ample opportunity to re-think this larger-than-life sculptor. Rodin may be difficult to pinpoint in art history, yet he continues to influence artists today.

Museums around the world are celebrating Rodin’s legacy, and The Metropolitan Museum of Art is no exception. Cementing a fruitful relationship with Rodin during the artist’s lifetime and owning a wide array of his work have allowed The Met to put together a most refreshing and uniquely comprehensive exhibition, “Rodin at The Met,” on view until Jan. 15, 2018.

“The exhibition tells the story of this great artist, but also the story of a hundred years of gifts and acquisitions of his works,” said Daniel H. Weiss, president and CEO of The Met, at a press preview on Sept. 15. Many of the works were acquired as gifts from the Iris and B. Gerald Cantor Foundation, which also made the exhibition possible.

The Met owns 91 Rodin sculptures, in marble, bronze, plaster, and terra cotta. Almost 50 are on view, including iconic sculptures like “The Hand of God” and “The Thinker,” in the same size as in the great portal “The Gates of Hell,” among others. One of the curator’s joys in working on this exhibit was discovering the exquisitely carved sculpture “The Tempest.” It had been kept in storage for well over 20 years. The only other marble known of it is in the Musée Rodin in Paris.

The statue that marked the beginning of Rodin’s public career, “The Age of Bronze,” stands as usual in the center of the gallery, as the axis between two major themes of the exhibition—creation and death.

On the west side of the gallery stands the homage to a literary giant “Monument to Balzac,” as well as “The Hand of God,” Rodin’s great tribute to Michelangelo and to artistic creativity. In contrast, the east side of the gallery focuses on despair, displaying “Adam” and “Eve” on both sides of ‘The Thinker,” mimicking their placement in “The Gates of Hell.”

On the walls, paintings from The Met’s collection by some of Rodin’s most admired contemporaries are displayed. “We could make the paintings for the first time really speak to the sculptures and the sculptures speak to the paintings, and that’s [the result of our] collaborative effort,” said Denise Allen, curator of European sculpture and decorative art at The Met and the main organizer of the exhibition. Allen led a team from three departments.

The recently acquired (in June) “Inferno” by Franz von Stuck, for example, is shown next to “The Thinker.” “The Inferno” was made in reference to the great epic poem by Dante that also inspired Rodin’s “The Gates of Hell,” explained Alison Hokanson, an assistant curator in the department of European paintings at The Met.

The exhibition also includes drawings, prints, photographs, letters, and illustrated books. Rodin kept drawing on a daily basis, especially during the later stages of his career.

“His drawings were never preparatory for sculpture, but we find this overlapping concern between the expressivity of the body and this interest in the human form,” said Ashley Dunn, assistant curator in the Department of Drawings and Prints at The Met. “Rodin is interested in very unusual poses. He always asked his models to relax during the sessions so that he could find unexpected positions in the body.”

The exhibit is beautifully thought out and well-integrated—from the color of the walls, to the lighting design, to the choice and arrangement of the works. Because of The Met’s historic commitment to Rodin, the museum is one of the few institutions in the world that can show an overview of his work. The collection is also remarkable in its variety. It includes rare terra-cotta sketches that still have the imprints of Rodin’s hand, as well as plaster studies, many given to The Met by Rodin himself.

“His place in history is very hard to determine, because Rodin is a bridge,” Allen said. “He can be seen as the last sculptor—and he saw himself that way, to some extent—who was working in the classical tradition.”

Rodin was strongly impressed by the great Renaissance master Michelangelo, and followed that artistic lineage—from Michelangelo, to the Baroque master Gian Lorenzo Bernini, to the neoclassical sculptor Antonio Canova, to 19th-century sculptors like Jean-Baptiste Carpeaux (whose main figure in his sculpture “Ugolino and His Sons” is in an almost identical pose to that of Rodin’s “The Thinker”).

Rodin did not belong to either the schools of realism or impressionism of his time. But in parallel to those practicing realism, he did not focus on idealizing the forms, and like the impressionists, he was keen on showing movement by letting light bounce off of irregular surfaces. In the later years of his career, he was fascinated by fragmenting the human figure. While controversial during his time, Rodin made way for later generations of artists to more easily abandon the humanism of the classical Western art tradition.

Today, Rodin can still be seen as a bridge. It’s a bridge that has been traversed typically in the direction toward abstraction, but is increasingly leading toward humanism.

The dark grey walls and the new lighting in the B. Gerald Cantor Sculpture Gallery (Gallery 800), specially refurbished for the exhibition, give more weight to Rodin’s sculptures.

Sabin Howard, the sculptor who has been commissioned to create the National World War I Memorial, for which a groundbreaking ceremony will take place on Nov. 9 in Washington, shared his thoughts about the exhibition.

“It’s definitely a statement,” Howard said upon first entering the gallery. Looking around at the walls, he said, “This is a return to classical sensibility and aesthetics.”

The grey chosen for the walls of the exhibit is similar, Howard said, to the walls of the 18th-century Parisian art academies. “You don’t see the shadows as much, but you see the pop of the form, so it becomes more dramatic. It’s more classical because it enhances the form [of the sculptures] rather than the environment,” he said.

Howard is one of the very few sculptors today who is working with the intention of bringing the classical tradition forward. He is strongly influenced by Hellenistic and Greco-Roman sculpture, as well as Michelangelo, Leonardo, and Rafael. But it was Rodin who inspired him to bring more emotion into the World War I memorial, currently in progress.

“Rodin actually changed the way that I work,” Howard said. “I had to learn drama and storytelling, and Rodin helped me with that.”

In the ancient Greek and Roman translation of the human figure, sculpture shows more subtle movements, for instance, “like the expansion of the rib cage and the sternum up toward the light,” Howard explained. “Classicism is about how little movement you show in a pose to create a psychological state. It is more about peacefulness—it’s contained.”

As he looked at Rodin’s “Adam,” he said, “This is not contained. All the emotions are visible, coming through to the surface.”

Rodin was able to put all his cards on the table, so to speak, in the gestures of the poses, which are more about weight and compression, Howard explained. “They have less to do with balance and harmony and more to do with anxiety. That’s where Rodin is very inventive and maybe why he drew [models] every day. He was trying to find new ideas. All the poses are new idea after new idea.”

In a method similar to Rodin’s creative process, Howard asked models to move in battle scene poses as he took bursts of photographs, capturing poses he could choose for the design of the World War I memorial. Also like Rodin, Howard sees endless creative possibilities in working with the human figure.

As Allen said at the press preview, “Rodin was singular in his focus. He strove to endow the human figure with a sense of passionate, emotional plight. He just kept to one idea: the human figure and its expression that allows for infinite possibilities in sculpture. … It is an endless fountain of inspiration.”

Allen had positioned Rodin’s fragmented torsos, “Torso” and “The Walking Man,” in proximity to “The Age of Bronze,” the classically inspired, nude male figure in the center of the gallery. In one glance you can see the trajectory of Rodin’s exploration of the human figure—from a harmonious full figure in stillness, to a headless and armless figure in motion.

Looking at “The Walking Man,” Howard deduced its preliminary state in clay. “The clay froze in his studio, right through the waist,” he said pointing at the crack. “So then Rodin repaired it with [more] clay and left it stuck like that to show his process.”

Rodin’s later works look a bit thrown off balance. “There is a chaotic nature to them,” he said. Perhaps it shows Rodin’s emotional unrest, or it could have been the times. Rodin created his later sculptures at the turn of the century, just a little over a decade before the start of World War I.

While dedicated to the human figure, however distorted, Rodin in many ways continues to act as a bridge for artistic sensibilities today. He bridges the sensibility of the Renaissance of Michelangelo’s time, which held a conceptual explanation of the human condition and the universe as being assembled by the Creator, to the fragmented, disemboweled-like sensibility seen in so much of contemporary art, which reflects this time of disintegrated morality.

Some contemporary artists may find inspiration, for example, in how Rodin used a robe provided by Balzac’s tailor and dipped it in plaster. It became a model from which Rodin sculpted the figure of “Monument to Balzac,” expediting his design. In a somewhat similar fashion, Howard has created a three dimensional digital print from his drawings to create marquettes (scale models) of the World War I memorial, from which he will sculpt in clay the monument in actual size. The monument will eventually be cast in bronze.

Looking around the gallery, Howard noticed people genuinely engaged and excited about the exhibition. The main art form of our times may be said to be film, and in that sense Rodin still speaks to us. Howard called Rodin very cinematographic. “If you walk around [Rodin’s sculptures], you see different scenes, different dramas. It’s romantic, meaning it shows emotions, stress, strain, and force,” Howard said.

He noticed renewed interest especially in the classical aspects of the exhibit. “It’s cool to see this getting so much attention. People are really excited here; they are really looking,” he said.