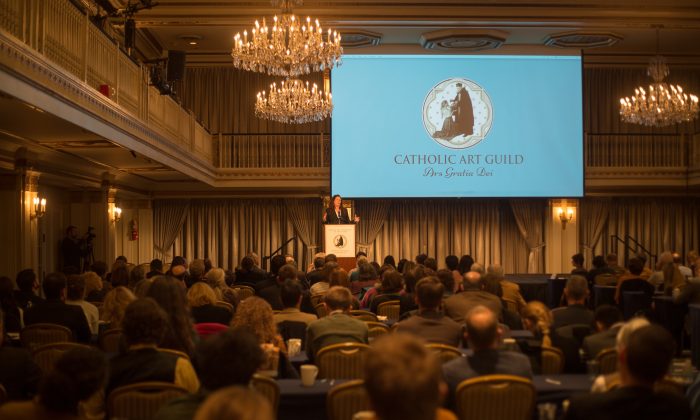 Catholic Art Guild founder Kathleen Carr at the first conference of the organization, "Beauty and the Restoration of the Sacred," in Chicago on Oct. 29, 2017. (Ruth Durkin Photography)
Arts & Culture

CHICAGO—The Catholic Art Guild has set out to restore the sacred role of art in Roman Catholic churches, hosting its first conference, “Beauty and the Restoration of the Sacred.” It’s yet another step in the recent resurgence of beauty in art.

As Father Joshua Caswell said at the well-attended conference on Oct. 29, the mission of the Catholic Art Guild can be demonstrated with a story about St. John Cantius, for whom the church sponsoring the guild is named. One day, a servant girl dropped and broke a jug of water. She wept at the thought of being punished by her mistress. St. John, in compassion, picked up the pieces of the jug and, through prayer, not only restored the broken vessel to a seamless condition, but also turned the water to milk.

The Catholic Art Guild hopes to repair the broken state of sacred art and its role in the church.

The guild had its beginnings three years ago, when founder Kathleen Carr, herself a painter of sacred representational art, found that traditional sacred paintings were no longer integral to the church. She was contacted by Catholic Marketing Network with the idea to create the guild, and the means to make it happen. After visiting St. John Cantius Church, she decided that it could become the guild’s spiritual home.

In the setting of The Drake hotel in Chicago, four guest speakers—an artist, an architect, an educator, and a philosopher—talked about restoring art to its proper role of illuminating the sacred.

Artist Anthony Visco, director of the Atelier for the Sacred Arts, spoke of his own journey as a “survivor of modernism.” In high school, Visco was inspired by Michaelangelo’s Pietà when it came to New York for the 1964–65 World’s Fair. He copied the masterpiece in his sketchbook. But when he applied to art school, the teachers discouraged “his hand [that] belonged to another time period.”

Visco quickly learned to create “relevant” art. He visited dumps and rearranged what he found there, for example. “I couldn’t do anything wrong” as far as the art world was concerned, he said. In fact, he was awarded a Fulbright for his work, which took him to Florence, Italy.

In Italy, Visco rediscovered the beauty of centuries-old sacred art and spent a year teaching himself to regain the skills he’d lost in art school. Since then, Visco has created sculptures, murals, and reliefs for sacred spaces. He also trains young artists and works to promote wider classical training in the sacred arts.

Duncan Stroik, architect, author, professor of architecture at the University of Notre Dame, and the founding editor of the Sacred Architecture Journal, asked an intriguing question: Would museums that house the sacred art treasures of the past bother to collect what’s created today?

Church architecture today often follows the trends in secular society—those of modernism and postmodernism—rather than reflecting humanity’s highest aspirations, Stroik said. When congregations do follow traditional models of architecture, they don’t hire the best artists or use quality building materials, and the results are mediocre.

Stroik believes that by hiring leading artists of faith, using superlative materials, and providing classical training for artists in an academy of sacred arts, churches could reclaim their century-old purpose of expressing eternal truths in glorious form.

Denis McNamara, associate director and associate professor at the Liturgical Institute of the University of Saint Mary of the Lake, posed the question of what makes a church a church. For Roman Catholics, it entails bringing the heavenly reality to earth through signs and symbols.

McNamara pointed out several of these symbols. The church itself is made of stones, just as each parishioner of the faith is a living stone, comprising the church body. The heavenly reality may be revealed in icons, their visual simplicity allowing one to “fast with the eyes” and contemplate exemplars of the ideal. Gems or gem-like colors, McNamara said, are the manifestation of a soul moving from basic ore to polished perfection. The artwork adorning the ceiling or behind the altar traditionally displays a heavenly vista to inspire worshipers to see themselves among the multitudes with God. Together, these make a church a church.

Taking a step back, keynote speaker Roger Scruton spoke of ways of knowing reality. The philosopher and author of more than 40 books believes beauty is important for non-believers, too.

Knowledge derived from science, he said, claims that sacredness can be reduced to the need for our genes to be reproduced in our progeny. Faith builds community, and community ensures survival.

But “the world has a meaning which is greater than what is revealed to our ordinary scientific inquiry,” he said. The scientific way of seeing the world neither accounts for our everyday experiences nor for the sacred.

Is there another way to know the world, then? When we see beautiful art, like Sandro Botticelli’s “Birth of Venus,” we experience not only idealized beauty but something beyond it, he said. It seems to be looking back at us, and we relate to the painting as we relate to other people: subjectively. Similarly, when we experience the sacred, we feel as though we are in communion with someone whom we cannot reach.

Beautiful, classical art naturally points to this subjective other, Scruton believes, and relies on this relational way of understanding the world, so utterly beyond the reach of science and yet so fundamental to us as humans.