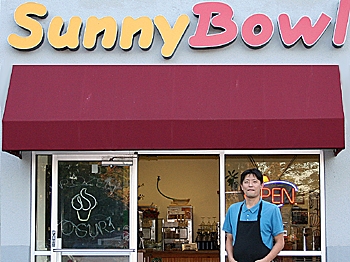 BY Ariel Song TIMEDecember 16, 2009 PRINT
I searched the Internet for Korean restaurants in Mountain View and stumbled onto this restaurant that has received close to 5 stars from many online reviewers. Most people who have eaten there have said, “It is fresh, healthy, cheap, and delicious.” I called the owner to ask if we could interview him to find out what the people are all raving about. The restaurant is surprisingly small, with only about 15 small tables. I found it was small and cozy.

The owner, Daniel Choi, ran a Korean restaurant in Hawaii for ten years. He came to California for his children’s education. His restaurant in Hawaii was a full-blown Korean restaurant that had many kinds of Korean dishes. But here in the California, he found himself in a difficult situation. The kitchen was small, and the cost of preparing Korean dishes was high. A typical Korean meal usually has five or six side dishes. These are called banchan and they require food items that are typically labor-intensive and expensive to serve. He thus decided to specialize in just this one dish, bibimbop.

Bibimbop is a very popular Korean dish that basically has five or six kinds of cooked vegetables, chicken, or beef with eggs on top and rice underneath. The dish is topped with hot gochujang sauce and sesame seed oil. Gochujang is a spicy fermented chili and soybean paste. This is one of the fundamental sauces used in Korean cooking. This is the sauce that gives Korean food a red color. One has to mix the ingredients together well with the sauce to get the full effect. It is healthy, delicious, and a quick eat. It has some similarities to Chinese fried rice, which also has rice, chopped veggies, and, sometimes, meat.

Bibimbop and Korean food use many vegetables prepared in simple and healthy ways. They usually blanch the vegetables instead of frying them. Sesame oil, garlic, salt, soy sauce, and, sometimes, a small amount of chili powder, are also thrown in. Spinach, soybean sprouts, radishes, and field and mountain greens are all cooked in this manner. All kinds of ingredients are mixed in to produce a quick, delicious meal. So, if you have brought back some Korean food leftovers, just mix them together, add gochujang, heat, and eat with kimchee, which makes it even better. This is actually what a bibimbop is.

Choi found that Americans, especially in California, love salad. So he came up with a salad-style bibimbop. He says many customers say: “Wow, we love it!” Most of his customers are computer engineers from the area. Most of them have heard about his restaurant through reviews posted on the Internet. During lunch hour, he usually gets about 100 customers.

One appetizer is a kimchee pancake for $1.85. Choi opened the restaurant in 2008 during Thanksgiving time. No one knew about the new kid on the block. Kimchee, an essential ingredient in Korean food, is made with fermented Napa cabbage. As time went by, all the kimchee was not sold, and it kept fermenting. He wondered what to do with it. He said: “You can't just throw it away.” He thinly chopped the kimchee, mixed in flour batter with oil, and made pancakes out of it. At first, he gave it to his customers for free. People loved it. Later on, when his business picked up and he did not have leftover kimchee to make pancakes, he started to sell it as a menu item.

Choi decided to make the menu very inexpensive to give better value.

Bibimbop costs from $4.54 to $7.34. For most dishes if you add 92 cents you can get a larger portion. But the regular portion is usually enough for most people.

One of the main appeals about the restaurant is that you get free frozen yogurt for dessert, which I thought was excellent. Frozen yogurt is lighter than ice cream but still is refreshing and sweet after spicy Korean food.

The restaurant is small, and during lunch the hassle for making change wasted a lot of time. So he rounded the menu to $6, which includes tax.

This comes with a frozen yogurt dessert, miso soup, and kimchee. Less than a year after opening, his business has picked up tremendously, he says. He thinks that the Bay Area can support four more Sunny Bowls, perhaps ones in Oakland, Fremont, Sunnyvale, and San Francisco. So his long-term plan is to open four more restaurants.

This is not actually authentic Korean food. It's a kind of fusion. For instance, all the vegetables in the Korean dishes are cooked. This bibimbop is similar to a salad: the vegetables are all raw and very finely shredded to make it fun to eat and digest. In traditional bibimbop, the eggs are usually cooked sunny side up. Here, they are scrambled.

Whether you have eaten Korean food or not, check out this place. It will be a great introduction to the vast cuisine of Korea.