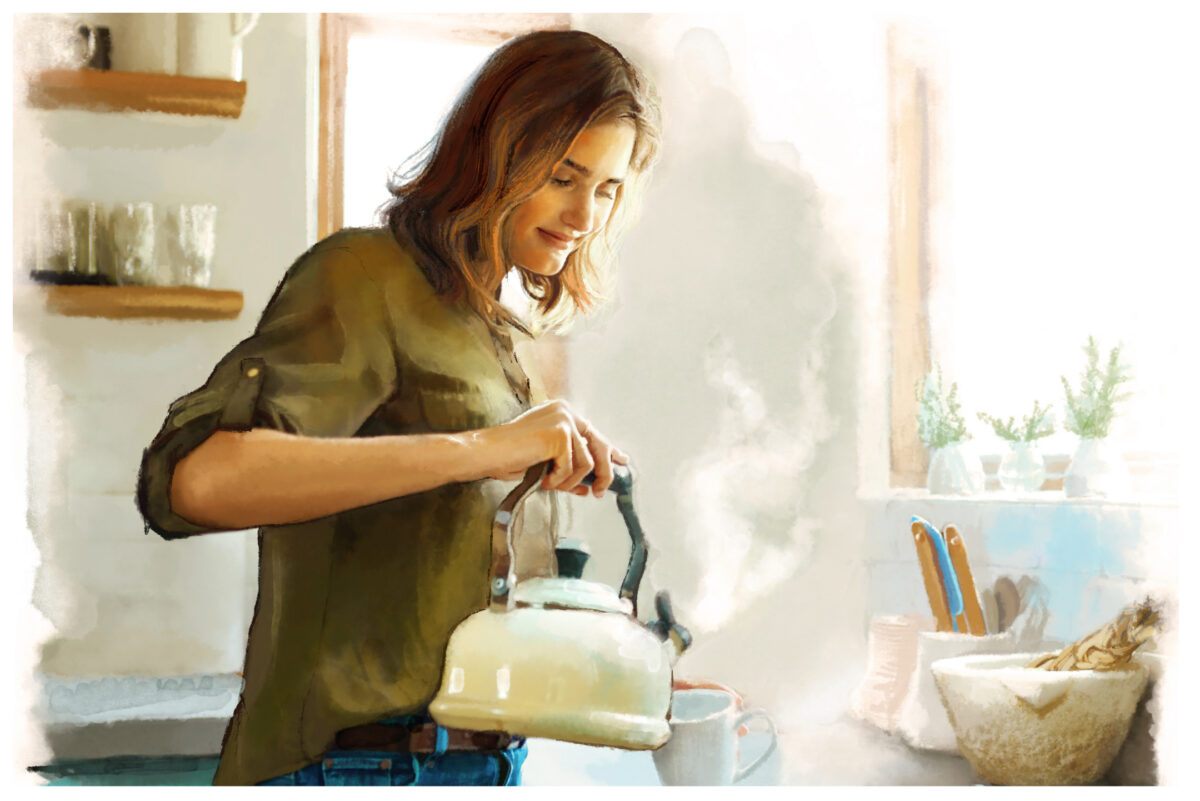 Doing something small and enjoyable, such as putting on the tea kettle, is one way to overcome inertia. (Biba Kayewich)
Family & Education

Isaac Newton’s Laws of Motion state in part that an object at rest remains at rest, and an object in motion remains in motion. While not exactly what Newton had in mind, these are good reminders when it comes to our own productivity as well—especially in the summer season.

Summertime calls us to sleep in, choose more play and less work, give in to the occasional afternoon nap, and relish a less busy season. It’s pretty great.

However, summertime bliss can quickly morph into uninspiring sloth if taken too far. While rest and play are vital to a good life, so are purpose and action. If you’ve ever spent more than a couple of days setting aside your responsibilities and lounging on the couch, you know that the initial relief and joy of resting soon devolves into guilt and disappointment in oneself.

Recalling Newton’s laws as summer marches on can help maintain a balance between beneficial rest and productive action.

Part of the issue we face in summertime is a significant change in our daily routine. Work and school schedules may look quite different in the summer months. New habits will surely be formed during this time. Whether they are good or bad habits is up to us.

When you loaf around for too long, you tend to find the motivation to get up and do something lacking. You feel like you’ve overdone this relaxation thing a bit, but the idea of doing the tasks your mind is nagging you to do feels overwhelming.

Do something very small and enjoyable. Perhaps you walk into your kitchen and turn on your kettle for some tea, or you stand up and fluff the pillows you were laying on, or perhaps you simply putter around your home for a few minutes. The goal is simply to leave the state of rest and get your body moving.

As you get going, you’ll likely sense a gradual momentum building. You’ll fold that dish towel you pass by in the kitchen, you’ll check the mail, you’ll straighten the shoes at the front door, maybe you’ll even start a load of laundry.

Remind yourself to stay in motion for a bit. At some point, you might jot down the things you need to get done, return some phone calls, make the bed, and even begin to look forward to working on a long-term project you’ve had in mind.

When it’s time to rest again, by all means rest. You’ll enjoy it more with the satisfaction of having taken care of some of your responsibilities, and the sense of empowerment from knowing that all you need to get more done is to put yourself in motion.