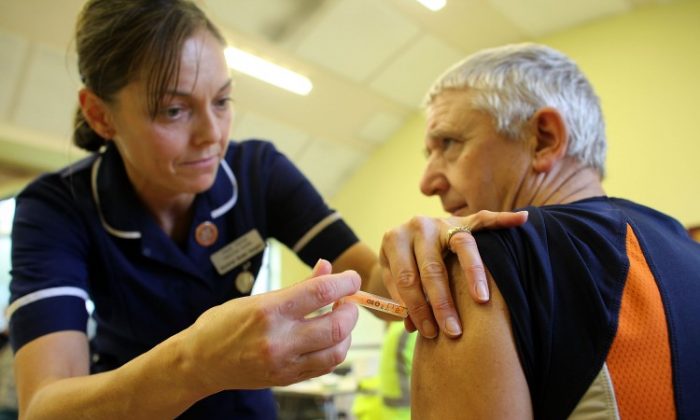 A member of the public is given an inoculation against swine flu at a medical centre in Cockermouth, England on Nov. 25, 2009. A new report warns that the effectiveness of the seasonal flu vaccine has been overstated. (Christopher Furlong/Getty Images)
Health News

While the elderly and vulnerable are being offered free vaccinations against seasonal flu by the NHS, scientists in the US warn that the effectiveness of flu vaccines has been inflated.

“Most of the studies that exist, and have been used as evidence, are ‘biased’,” Dr Alfred Sommer, Expert Advisory Group (EAG) chair for the review, said in an email. “Those hospitalised or [who] died were inevitably more likely to have not been vaccinated. This was interpreted to mean that vaccination protected people from these bad clinical outcomes.”

“There is an underlying problem in making this causal assumption,” said Sommer, who is a professor of Epidemiology, Ophthalmology, and International Health at the Johns Hopkins University School of Hygiene and Public Health.

Many studies of different treatments unrelated to flu show that people who had been vaccinated will always have better health than those who are unvaccinated, “even if the intervention is a pure placebo”, he said.

“Those who have greater health seeking behaviour are always healthier, though we don’t always know why.”

Sommer said that there was also a second problem with many of the studies: they used a change in patients’ antibodies to define the success of the vaccine.

“We now know, and everyone agrees, this was a faulty process, because of the effect the vaccination had on their level of antibodies.

“If one excludes these two forms of un-interpretable studies, it does not leave much evidence that influenza vaccination is as effective as it was purported to be.”

The new report “The Compelling Need for Game Changing Influenza Vaccines” led by the University of Minnesota’s Centre for Infectious Disease Research and Policy (CIDRAP), shows that, since research began in the 1940s on the effect of the influenza vaccine in healthy adults, the efficacy has been quoted as 70 per cent to 90 per cent.

“The problem with those statistics,” said lead author Dr Michael Osterholm in a statement, “is that much of the data from which these percentages are derived come from studies with less than optimal methodology and poorly defined clinical outcomes.”

He said that studies using optimal methodology have not found the same level of protection often attributed to the current vaccines.

The report found that as part of an effort to reduce flu illness and death in the last 30 years, general policy shifts towards a universal recommendation for influenza vaccination “often were based on professional judgement and not on sound data”.

The widespread belief that the existing influenza vaccines are highly effective, even in the elderly, has led to, according to Sommer, “limited impetus or public support for investing in the development of a much improved vaccine”.

Sommer would like to see “more energy, priority and funding in the development of a radically different vaccine”.

The researchers do still urge people to get the flu injection. “The present vaccines are the best interventions available for seasonal influenza,” Osterholm said.

Dr Clare Gerada, Chair of the Royal College of General Practitioners, said in an email that flu vaccines can take several months to be developed, so countries often have to look at the evidence on which flu viruses are circulating elsewhere in the world and make calculated decisions on which flu vaccinations to put into production in their own country.

“The vaccine is perfectly safe and goes a long way towards protecting us against serious complications arising from flu, including death,” she said.

“I cannot stress enough how important it is to remember that flu can kill. I would urge anyone who might be at higher risk of developing complications should they contract flu to go to their GP to get their flu immunisation.”

Gerada also emphasises the flu vaccine does not give a person flu as it doesn’t contain the necessary “active” part of the virus – it only protects.

The vaccine causes the body’s immune system to make antibodies to attack the flu virus, according to the NHS website.

A Department of Health spokesperson said in an email that the government had undertaken a detailed review of the evidence on the effectiveness of the flu vaccine.

“There is no doubt that the flu programme saves lives.

“We strongly encourage scientists and the vaccine industry in their efforts to develop new and more effective flu vaccine and do not agree that these efforts are being discouraged.”

The Health Protection Agency recently reported that 74 per cent of people in England over 65 had received the seasonal flu vaccine in 2011/12, a slight increase from the previous year.