Renowned Conductor: Shen Yun Is Common ‘For All Humanity’ 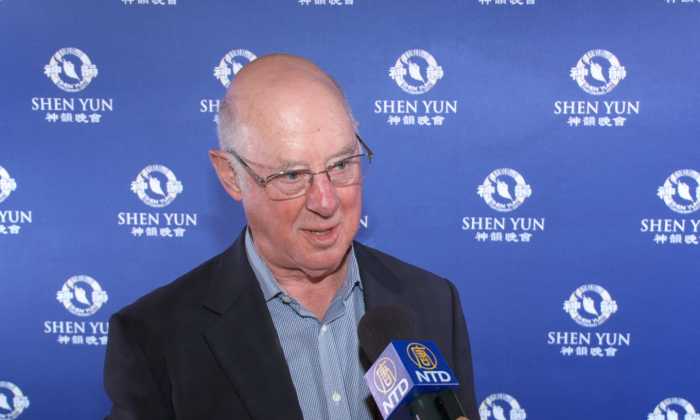 “The lyrics that were up on the screen are common thoughts of all humanity; the concept of caring, sharing, and looking for that which is good in people,” Heywood said.

Heywood, OAM (Order of Australia Medal), is conductor for Camberwell Chorale and Camerata Orchestra. He has seen Shen Yun perform in Melbourne for many years and is continually reminded of how important music and culture is to society.

“[W]e need music, we need culture, so we can understand ourselves. Shows like [Shen Yun] just reinforce the importance of those,” he said.

As an experienced conductor, Heywood could appreciate Shen Yun’s orchestra and how the combination of the Chinese and Western instruments, which are unique to the orchestra, added meaning to the overall performance.

“[S]ome of the new compositions [were] great; the use of the Eastern and Western instruments adds a particular color to it; the erhu was beautiful, that gives its own color to the orchestra. So the combination of the different sections of the orchestra, and the way it was arranged, it was very lovely.”

For Heywood, the combination of the orchestra along with the dancers and the animated backdrop aided in the portrayal of the stories.

“I’ve seen different interpretations of the stories, of the conflict between good and evil, and the story that was presented each time in a different way, a very interesting way,” he said.

The mission of Shen Yun is to revive traditional Chinese culture—a culture believed to be divinely inspired. According to the Shen Yun website, “China was known as ‘The Land of the Divine.’ People lived in harmony with the universe and saw a connection among all things. But in 1949, when the Chinese Communist Party came to power, it set out to destroy this heritage of five thousand years. It nearly succeeded.”

According to Heywood, the conductor of Shen Yun, Milen Nachev, did a fantastic job with balancing all sections of the orchestra.

“He did a fantastic job. It was a nice tight orchestra, a good balance across the sections; it is well handled, well crafted and actually congratulations to him,” Heywood said.

Heywood believes there is always something to learn when people watch Shen Yun and “that’s something we all need to keep doing.”

“All art forms are an expression of humanity; the more you nurture those, the more you understand our humanity,” Heywood said.