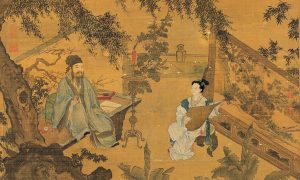 The Virtue of the Brush in a Time of Chaos

When Liu Xitong was asked by a film crew to write four words in Chinese calligraphy, he agreed immediately, heartily, and for reasons the crew did not yet know.

Once a famous calligrapher back home in China, Liu had since left the country where the Chinese Communist Party (CCP) persecuted him for his faith. In doing so, he had set aside his art in his quest to pursue justice after he moved to the United States.

On the day of the shoot, Liu and the documentary producers discussed the calligraphy scene as they prepared the set. The documentary “When the Plague Arrives,” produced by NTD Television, is about humanity at a crossroads during the turbulent times of the pandemic.

In the film, historical events are shown in parallel with the present day. Epidemic diseases threw ancient civilizations in both the East and West into disarray and not only brought death and mayhem but also cast a harsh light on those societies that no longer upheld human dignity.

Liu would be writing a four-word Chinese idiom taken from the classic Chinese text “Four Books” in which Zhu Xi translated the “Analects of Confucius.”

It translates as “When things are chaotic to the extreme, order must be restored.” The work is now available for sale at: InspiredOriginal.org/Calligraphy

It was then that Liu shared his own story. For practicing truthfulness, compassion, and forbearance, just as the 70 million other Chinese citizens who took up the spiritual practice of Falun Gong, Liu was the target of the CCP’s persecution campaign.

“I was sentenced to three years in the Chinese Communist Party’s illegal labor camp and spent four years in prison,” Liu said in an interview after the film was completed. These were years of suffering. “I lost my freedom and the environment for creation and studying and writing. I endured violent beatings and insults from Chinese Communist Party prison guards and prisoners. I had the blood tests they give to those marked for organ harvesting, and these years were like a contest between life and death.”

This past year, the advent of COVID-19 and the fallout of the Chinese communist regime’s mishandling of the situation also put a global spotlight on the regime’s other misdeeds—the decades-long, brutal persecution that affected Liu being but one of them.

After the CCP outlawed the spiritual practice of Falun Gong on July 20, 1999, thousands went to Beijing for redress, and Liu went too. Afterward, police officers barged into his place of work and forcibly handcuffed and kidnapped him for interrogation before throwing him into a labor camp where he was to undergo “reeducation,” or brainwashing methods, from 2000 to 2003. Liu’s imprisonment was technically illegal, even under the CCP’s laws, and in 2004 he was finally acquitted.

Liu said that, after his release, he threw himself into artistic creation the way a fish needs water. His primary mission, as it had been since July 20, 1999, was spreading the truth about Falun Gong’s persecution amid the powerful regime’s propaganda. But every other hour he had, he dedicated himself to the art of calligraphy, and he created thousands of works.

Meanwhile, he heard strange rumors being spread about him: that his fame as an artist had plummeted when he took up his spiritual practice, that he had been disowned by his parents, or that he’d committed suicide. None of these were true, but instead of refuting the gossip verbally, Liu put on a calligraphy exhibition in 2007.

Despite the controversy, or possibly because of it, the exhibition was packed. Visitors marveled at Liu’s work, and told him how different his exhibition was from others they had seen. Several attendees told him that it felt like the whole venue radiated compassion and harmony, and that it left an unforgettable impression on them. And even though propaganda against Falun Gong and its adherents was still being published by the Chinese state-run press, Liu’s exhibition was lauded by newspapers, and his comments about traditional art and morality were published as well.

But days after the exhibition, Liu was detained by police again, and his wife was also kidnapped by officers after they ransacked his home. He was interrogated and detained for a month. Then in 2008, he was illegally sentenced to four years in prison, during which time he faced periods of intense torture—all because he would not give up his dedication to Falun Gong.

Liu credits Falun Gong for opening his eyes to virtue, morality, the dignity of human beings, and the importance of God, and says that this undoubtedly influenced his work. In fact, before he started practicing Falun Gong, Liu said, his art was a completely different style.

Born to illiterate parents, Liu was the only one of five children who could write. From age 3, he showed a gift for drawing when he began replicating masterpieces. In school, he showed talent for drawing, painting, sculpture—and calligraphy.

“Since childhood, I have been blessed,” Liu said by email. He immersed himself in great ancient works, like those of Qing Dynasty Emperor Kangxi and Tang Dynasty Emperor Taizong, and studied silk manuscripts from the Qin and Han dynasties, bronze inscriptions, and various scripts. There were thousands of years of treasures to mine, each era and great scholar imbuing the art with something of their own, Liu explained. And in studying the greats, Liu developed his own style and his own scripts.

“Chinese calligraphy is not only a treasure of the traditional Chinese culture that was passed down by the gods, but it is a high art that is unique in this world,” Liu said. “The history is long, and its development is colorful.”

But Liu grew disillusioned in his worldview as he got older. He recounted the arrogant and selfish culture he was immersed in, surrounded by CCP members and working in Party-affiliated departments. This soon seeped into his art, and he followed fads and trends rather than tradition, creating works in modern or “cursive” calligraphy styles. His exhibitions were well received, praised in the press, and honored with awards.

Falun Gong was introduced to the public in 1992, and millions started practicing in just a few years. In 1996, Liu began practicing too.

Falun Gong taught meditation exercises and the three principles of truthfulness, compassion, and forbearance, and it is part of the ancient Chinese tradition of self-cultivation. Millions took up the practice and, seeing improvements in their mental, physical, and spiritual health, spread the practice through word of mouth. It was a return to traditional Chinese culture and morality that the spirituality-starved people craved.

Liu said that these principles held a mirror up to his soul and dramatically changed his worldview. He felt he had strayed so far from the traditional principles and aesthetics that guide the art of calligraphy. He had become a selfish person himself, who held no high ideals or traditional morals, and this was plainly evident in his work.

Liu didn’t second guess his epiphany—he burned all of his modern works and vowed to once again uphold traditional ideals. The art of calligraphy is the pinnacle of a culture believed to be divinely inspired, and Liu’s gift was a blessing from God; he intended to honor that.

“If an artist upholds God’s instructions and uses the skills given by God to express the enlightening beauty of God’s kingdom in this world, to connect humans in harmony with the world, advocating virtue and goodness … the works will reflect a beauty that truly moves people,” Liu said.

He wanted his works to reflect the truth and beauty of the universe. And calligraphy, being a reflection of the artist’s soul, required Liu to dedicate himself to just that. He decided to let truthfulness, compassion, and forbearance guide him.

Calligraphy is not an art that benefits from an impassioned state and frenzied mind. You need, instead, a pure mind and to be in harmony with the virtues, Liu explained.

“The process of calligraphy is the exquisite display of the mystery and science of life and the universal, rendered visible by the tip of the pen,” Liu said. “Calligraphy is a wonderful combination of innate human potential and acquired effort laid bare on the paper.”

A few years ago, Liu was finally able to leave China. When he arrived in the United States, he set aside his passion for the art in order to focus more time on telling the truth about the CCP’s violent persecution of Falun Gong. But when word of mouth brought Liu’s talent to the attention of a documentary producer, he felt gratified to be able to use his gift in aid of his mission.

“It has always been my wish to continue that path of self-cultivation, return to tradition, and leave a reference to the art of calligraphy for posterity,” Liu said.

Watch the documentary ‘When the Plague Arrives’ here.