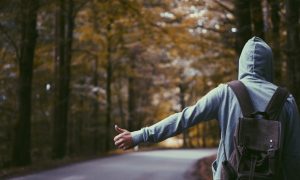 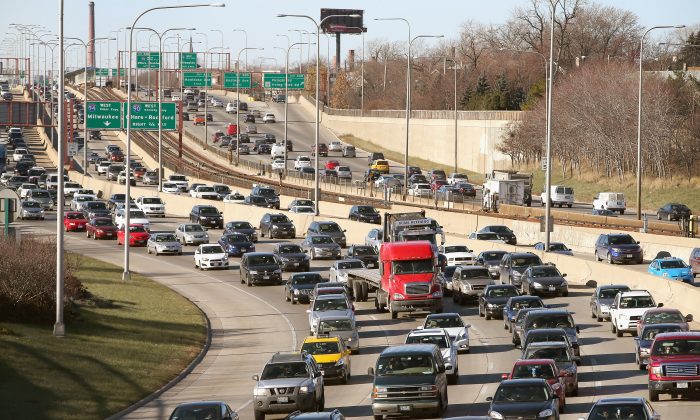 Traffic backs up on the Kennedy Expressway as commuters and holiday travelers try to get an early start on their Thanksgiving travel on Nov. 27, 2013, in Chicago, Illinois. (Scott Olson/Getty Images)
The Reader's Turn

Renewal of the Expired US Highway Trust Fund Benefits All

The most recent extension of the National Highway Trust Fund authorization will expire on Oct. 29. This vital funding source is used to pay for both highway and transit projects.

Past Presidents and Congress have been more interested in winning another term in office. They have repeatedly kicked this can down the road. The national gasoline tax is used to support the Highway Trust Fund. It was last raised to 18.4 cents in 1993. With gasoline at record low prices (under $3.00 per gallon), this a good time to raise the federal gas tax by just pennies per gallon. This action could fully fund the national Highway Trust Fund and its Mass Transit Account on a permanent basis for years.

Most Americans, whether city, suburban, or rural residents, Democrat or Republican, liberal or conservative, benefit by good roads, bridges, and public transportation. It is one of the best investments we can make.

With continuing gridlock and partisan bickering in Washington, renewal of the Highway Trust Fund and the accompanying Mass Transit Account could be the one issue everyone can agree on. What a great start for new Republican House Speaker Paul Ryan, if he could reach across the aisle and work with Democratic House Minority Leader Nancy Pelosi, GOP Senate Majority Leader Mitch McConnell, Democratic Senate Minority Leader Harry Reid, and President Barack Obama in passing a multi-year long term funding bill.