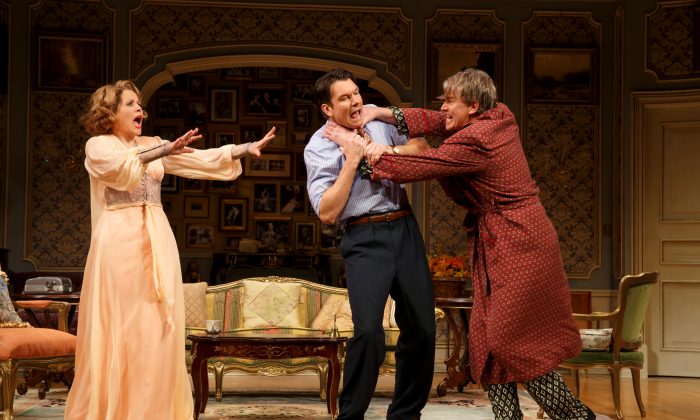 With Renée Fleming playing a narcissistic opera star, will “Living on Love” bring new audiences to opera? No, it’s not likely. More probably, the show will induce some opera fans to catch a famous soprano doing something completely different from her usual gig at opera houses, where her characters are usually dying for love. But they had better act soon because this vehicle is not sturdy enough for a long run.

“Living on Love” is derived from a 1985 comedy, “Peccadillo, by Garson Kanin. Though he wrote a number of famous screenplays (often with his wife, Ruth Gordon) and the Broadway hit “Born Yesterday” (which was also made into a successful movie), “Peccadillo” closed out of town. Now, Joe DiPietro has revised it—but not enough.

Strangely, the show has all the ingredients of a good musical, starting with lead characters who resemble the battling pair in “Kiss Me Kate.” Fleming’s co-star is Douglas Sills (who played “The Scarlet Pimpernel”), and DiPietro and director Kathleen Marshall had worked on musicals together (“Nice Work if You Can Get It”) as well as separately. (He wrote “Memphis,” and she directed and choreographed “Pajama Game” and “Wonderful Town,” among others.)

“Living on Love” is a screwball comedy about a married couple with huge egos. Fleming plays an opera star named Raquel De Angelis, whose best days are behind her. She is married to Italian conductor Vito De Angelis, who speaks with a heavy accent. He is also a compulsive womanizer and given to flamboyant gestures, either of romance or jealousy.

The action takes place in the spring of 1957, and the characters resent their more illustrious fellow artists. Raquel can’t tolerate a mention of Maria Callas and Vito despises Leonard Bernstein. (Actually, with his head of gray hair, Sills looks like Bernstein.)

At the beginning, Vito is working on his memoirs with Robert Samson (Jerry O’Connell). In Vito’s mangled English, a ghostwriter is a “spooky helper.” Vito received a large advance from the Little Brown publishing house, which he desperately needs because the couple is living beyond their means. The conductor lacks the ability to concentrate or to tell the truth, a quality he shares with his wife.

Fleming seems to be having fun playing the vain opera star.
Raquel’s career is in decline and she is forced to perform in unlikely places like Fort Lauderdale. (“They have opera in Fort Lauderdale?” Vito asks incredulously.) When Vito is told that a young woman has come to see him, the vain conductor (who had been eating breakfast) runs molasses through his hair.

She turns out to be the attractive Iris Peabody (Anna Chlumsky), an ambitious assistant editor at Little Brown. Vito immediately makes a pass at her and soon she becomes his ghostwriter, while Robert does the same for Raquel, whom he idolizes. Robert is an aspiring novelist, and soon a romance develops between the two ghostwriters.

Rounding out the cast are two male servants, Bruce (Blake Hammond) and Eric (Scott Robertson), who harbor a secret. They also break into song occasionally, both classical (the duet from Bizet’s opera “The Pearl Fishers”) and pop music (the Eddie Cantor hit “Makin’ Whoopie”). Fortunately, the audience is fleetingly treated to Fleming’s beautiful voice, either singing along with one of her opera recordings or performing a lovely rendition of Irving Berlin’s “Always,” with assistance from Sills.

Fleming seems to be having fun playing the vain opera star. In real life, she is reputed to be among the most unpretentious of divas. She looks glamorous in the furs and gowns designed by Michael Krass.

While Fleming gets laughs in the role, a number of non-opera stars could have done as well or better. The comic gem here is the over-the-top performance by Sills. His character may be cartoonish, but he is often hilarious.

By contrast, Chlumsky and O’Connell are overly animated. With their secondary roles, less would be more effective.

Besides being repetitious, some of the comedy is pretty stale. Vito’s mode of seduction by playing Ravel’s “Bolero” had been used in Blake Edwards’s movie “10” years before Kanin wrote “Peccadillo.”