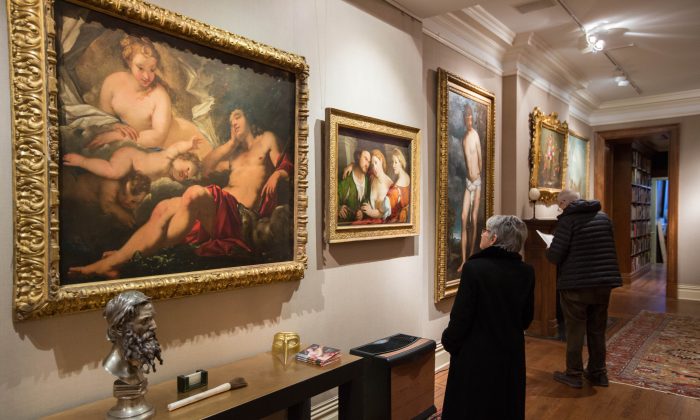 The paintings, some never publicly shown before, are available for purchase in honor of scholar David Rosand
By Kati Vereshaka

Take a peek at the world of the art market and it soon becomes obvious that it is dominated by contemporary art. Admittedly, the accessibility of contemporary art might have a lot to do with that. Yet now and then, collectors get first dibs at a Bellini, Tintoretto, and even Titian.

The time is now to, at least, look at more than 30 important works of the Renaissance, Baroque, and Rococo periods—many never before seen publicly—on view and available for purchase as part of the exhibition In Light of Venice: Venetian Painting in Honor of David Rosand, at the Otto Naumann Gallery in Manhattan.

“The idea of this exhibition was to bring together paintings that are of the top level but that are still accessible to collectors. There are pictures that are $40,000 to $50,000—an amount for which you can’t buy a print in the contemporary market,” said co-curator Robert Simon. The show is jointly curated by Otto Naumann and Robert Simon, who both studied art history at Columbia with David Rosand and have continued their scholarly work while operating their eponymous art galleries devoted to old master paintings.

A Tribute to David Rosand

A portion of the proceeds of sales will benefit the David Rosand Tribute Fund at Columbia University, which was formed last year following the much-loved and esteemed art historian’s death in 2014. The theme of the exhibition speaks directly to Rosand’s passion for Renaissance Venice and its artists—a subject that he made seem immediate and vividly alive.

The grandest of the shown works hangs from the ceiling of the art gallery. It is a rare Tintoretto titled “Allegory of Music,” rare because it is the only ceiling painting that the artist created for a domestic setting.

“St. Sebastian” is the only work in the show by one of the great masters of the Renaissance—Tiziano Veccellio. Called Titian (circa 1488–1576), he was regarded even in his time as the undisputed master of Venetian painting. It is exemplary of the Venetian sensual style that favored studying the figure and understanding the relative values of color.

Titian’s “St. Sebastian” cuts a rather corpulent figure, surrounded by a mythical and ominous landscape. He is lit by enough brightness to show the saint’s earthly flesh as he contemplates the arrows of his impending death in this earthly realm.

The natural setting for such a work is, of course, a religious institution or museum, but it could be anyone’s for around $4 million.

Prices for the works on show range from $40,000, for a depiction of San Girolamo Emiliani by Giovanni Battista Piazzetta (1682–1754), to well above $10 million for Rococo period painter Bernardo Bellotto’s (1721–1780) “Architectural Capriccio with Self-Portrait.”

Bellotto became famous throughout Europe as a vedutista, or Italian urban landscape painter. With “Architectural Capriccio with Self-Portrait,” he threw down the gauntlet at critics who had him pinned as being unable to go beyond depicting real landscapes. In this daring, theatrical composition with elements of Venetian architecture, he makes himself the focal point as he ushers his critics’ eyes to behold the grandiose and totally imaginary setting, bathed in the real warmth of afternoon sunlight—the gesture made more poignant by his immaculate, white glove.

Other later Venetian paintings include significant works by Amigoni, Bambini, Guardi, and Diziani.

While the exhibition feature paintings from 14th to the 18th centuries, the focus is on the 1500s, the period most studied by professor Rosand in his many books and publications. Other artists whose work is on show include Carpaccio, Giovanni Bellini, Palma il Vecchio, Jacopo Bassano, Palma il Giovane, the subject of Rosand’s doctoral dissertation, Bonifazio Veronese, and Paris Bordone.

Simon noted in the media statement that with the changing focus of academic art history, support is needed to maintain the teaching of the crucial Renaissance period. The establishment of the Rosand Professorship in the Italian Renaissance was meant to ensure that the subject will be taught in perpetuity.

For potential private owners of the works, what will come into consideration is the effect of living with traditional art on a day-to-day basis.

Bria Koser, the Otto Naumann gallery director who has been inhabiting the same space with these works, had this to say on the subject:

“Old master paintings have many layers to them. Often returning to them or living with them, they reveal themselves to you differently each time,” she said, adding, “a lot of modern art tends to be one-dimensional. It has an initial shock value, but …” the rest was implied and perfectly understood.

It is also interesting to note that while contemporary art is created as a result of the artist’s own creative impulses, the works on show were commissioned by the patrons of the age.

In Light of Venice: Venetian Painting in Honor of David Rosand, is showing at the Otto Naumann Gallery, 22 East 80th St. in New York through Feb. 12.