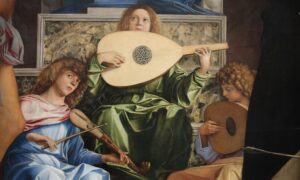 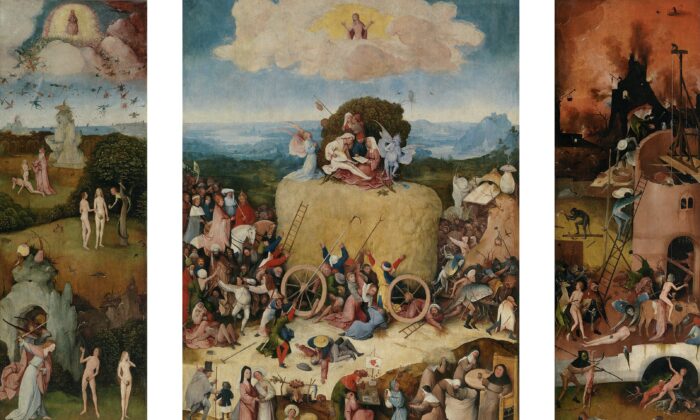 Remembering What Is Important: It Is All But Hay

As human beings living in this world, we are often bombarded with materialistic desires that may fuel our sufferings. We can be led to believe that our lives would be better if we only had more—more money, more affection, more education, more beauty, and so on. Pursuing more, however, often leads to more hardship.

For me, Hieronymous Bosch’s painting “The Hay Wagon” reminds us that we increase our sufferings when we pursue materialism and ignore the divine.

In the late 15th and early 16th centuries, Bosch was a member of and painter for the secret society “Illustrious Brotherhood of Our Blessed Lady.”

Many of Bosch’s known paintings were made for the Brotherhood and may reveal an eccentric way of depicting religious subject matter.

According to the Prado Museum website, “The painting offers an [example] of a different type to the ones commonly used at the time, in the sense that it is not a question of doing good but rather of avoiding evil and of adhering to this rule throughout life.”

Bosch’s painting “The Hay Wagon” is the center panel of a larger three-panel painting called “The Haywain Triptych.” In this center panel, Bosch depicts over a hundred figures placed around a wagon that carries a very large amount of hay.

The Prado Museum website suggests that the painting “illustrates the verse from Isaiah 40: 6: ‘All flesh is like grass, and all its glory like the flowers of the field,’ referring to the ephemeral and perishable nature of earthly things. At the same time, he illustrates a Flemish proverb that states, ‘The world is like a haywain, and each man takes what he can.’”

At the very top of the composition, the heavens open and reveal Jesus, a representation of divine righteousness. Jesus is painted as a single figure against a simple background of glowing yellow framed by clouds.

No matter where we look in the composition, Jesus stands out, which reminds us that the representation of divine righteousness is the most important element despite everything else going on in the painting.

Right below Jesus, on top of the hay, we see a small cluster of figures and a bush growing from the hay. Here, I see the representation of lust. A man dressed in all white appears to play music to seduce a woman dressed in red.

Behind the woman in red, another man points to a document that the woman holds. Behind them, in the bushes, a man and woman passionately embrace each other for a kiss. Another man peeks from behind the bushes to voyeuristically watch the scene unfold.

This scene plays out between an angel on the left who looks up to the heavens with its hands clasped in prayer and a demon who encourages the lust to continue with the music from the horn it plays.

Many things that are accepted by society today were thought to be detrimental to the soul 500 years ago. Our music and media are filled with themes that are blatantly sexualized. Are we as a society being led astray by the music of demons?

Bosch has placed the most drama around the hay wagon in the middle register of the composition. Here, it appears Bosch is depicting the woes of greed.

The hay wagon is being carried by demons to the far right of the composition. These demons appear to be part animal and part human. Behind the demons are a bunch of figures that scurry toward the hay wagon.

Despite the fact that heaven has opened above, a church procession to the far left of the composition follows behind the hay wagon pulled by demons. These figures focus on the hay wagon above all else. Some seem to just follow the hay, others celebrate the hay, and others reach for and try to climb the hay.

In the middle, figures are shown desperately reaching for the hay. The hay wagon does not stop, however, and some people are trapped and trampled by its wheels. Some try to grab the hay with tools from afar hoping to avoid danger but to still reap the hay’s benefit. One man even stabs another over the hay.

The figures can’t seem to realize that the hay is just hay, just like we sometimes fail to realize that money is just paper. It’s our own mindset toward these things that give them their power.

Like the church procession to the left, even those of us who wish to be good and spiritual people may find ourselves hiding our greed for money, for materialistic and ephemeral things, behind a false or insincere righteousness we portray.

In the bottom register of the composition, Bosch depicts everyday life. To the far right, we can see a woman carrying a bundle of hay on her back. She looks as if she is going to place the hay into the big bag of hay near the table.

To the left, a man dressed in blue plays music, and a pot of flowers is attached to an object protruding from his head. A woman seems to present him with hay, hay that may be responsible for the creation of his musical instrument.

Continuing to the left, a dentist inspects the mouth of a patient. He has a table set up with medicinal information and hay can be seen projecting from his money pouch. Here, the hay seems responsible for his ability to learn and practice medicine.

Next to the dentist, a group of women take care of their families. They fix food and bathe their children. They are shown as affectionate and loving to their families.

Everyone so far in this bottom register is shown with their backs turned or at least unaware of the craziness occurring above them. But the older man to the far left of the composition leads his young son toward the chaos to teach him the ways of the world.

Hay—money, material items, and so on—helps us live our daily lives. Is there a way, however, that we can teach our kids a better approach than to pursue these things by all means necessary? Is there a way we can manipulate the hay of the world while avoiding being manipulated by demons ourselves?

Can we teach our kids the importance of remembering divine righteousness no matter who we are or what we do in life? How might we make our materialistic pursuits secondary to the divine?