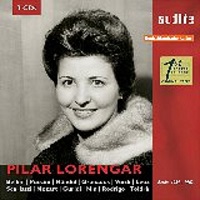 Pilar Lorengar (1928-1996) was a leading opera singer for over three decades. The one time I saw her in person was at a Promenades concert at Lincoln Center.  (For these summertime concerts at Philharmonic Hall, now known as Avery Fisher Hall, the seats were removed and replaced by small tables and chairs.) My family was sitting right in front of the stage and at one point, Lorengar came out with a guitar and sang Spanish songs to her own accompaniment. She seemed to enjoy herself as much as the audience did.

Spain has produced many outstanding opera singers and Lorengar is not as well-known as she deserves to be.  I therefore was happy to receive a new 3-CD set (on Audite), titled simply “Pilar Lorengar.” These recordings were made early in her career, between 1959 and 1962 and the collection includes live and studio performances.

Lorengar began her career in zarzuela (Spanish operetta), as did a number of opera stars, such as Placido Domingo. In her early 20’s, she performed on 30 complete zarzuela recordings. When she moved into opera, she achieved her first international success as Cherubino in “The Marriage of Figaro” in Aix-en-Provence in 1955. She found her artistic home at the Berlin Opera. Indeed, she resided there for the rest of her life.

Lorengar was recognized as one of the world’s leading Mozart singers; her debut at the Metropolitan Opera was as Pamina in “The Magic Flute.” She was also notable in Puccini and Verdi, among other Italian, French, German and Russian composers. Her “La Traviata” at the Berlin Opera with Lorin Maazel conducting (which was recorded) is prized by many collectors. She was also a popular recitalist, specializing in German lieder as well as the music of her homeland. Within a few years after her first appearance at Aix-en-Provence, she was singing all over the world, including appearances at Covent Garden, the Glyndebourne and Salzburg Festivals.

The first CD contains opera arias. About half were from operas that Lorengar was known for, such as “Magic Flute,” “Puccini’s “Turandot,” “La Boheme” and “Madame Butterfly” and Verdi’s “La Traviata.” However, the first disc also contains some arias from operas she didn’t perform, for example, Verdi’s “Ernani,” Handel’s “Julius Caesar in Egypt” and Scarlatti’s “Pirro e Demetrio.” Although she often appeared in”Don Giovanni,” the role she played was Donna Elvira. Here, she sings an aria in which she is a different character, Donna Anna. The lone Spanish piece on this CD is “The Maiden and the Nightingale” from Granados’ opera “Goyescas.”

Lorengar had a creamy soprano and a distinctive vibrato, which is pleasing to my ears (though not to everyone’s taste).  Her voice is strikingly beautiful and she takes great care to project the text, whether she plays a Druid queen or a shy seamstress. The Scarlatti aria is especially jubilant.

The rest of the set contains lovely examples of her way with art songs, beginning with four love songs by Rodrigo with orchestral accompaniment. On the rest of the second CD, Lorengar is accompanied by Hertha Krust on piano. Most of the songs are Spanish (by Nin, Leoz, Guridi, Granados, and Toldra). At the end of the CD, she sings five songs by Verdi, from his “Composizioni da camera.” These songs were written early in the composer’s career, during a painful period in which his wife and two children died. The first song is the wintry “La Zingara” (The Gypsy Woman). The last song is adapted from Goethe’s “Faust” and is just as downbeat and Lorengar is introspective in these pieces without being overly sentimental.

On the third CD, Lorengar performs with another frequent collaborator: the guitarist Siegfried Behrend, starting with songs by Bellini and Mozart. The Bellini is downbeat but the mood picks up with Mozart, starting with “Zufriedenheit” extolling life’s joys and including the playful song about children “Das Kinderspiel” (The Child’s Game”). Following a Handel piece, “No se emendera jamas” (with Richard Klemm joining on viola da gamba), the rest of the CD contains Spanish songs from the Renaissance up to nine folksongs collected by Federico Garcia Lorca (1899-1936), all harmonized and freely arranged by Behrend. (You may recognize “Anda Jaleo” as a more refined interpretation of “Venga Jaleo,” which the Weavers performed.)

The box set contains a booklet with information about the recordings and a short biography of Lorengar. Unfortunately, there are no translations of the pieces she sings. They are supposedly on the label’s website, but I couldn’t find them. The sound quality is good throughout. At $30 on Amazon, the set is a bargain and is highly recommended.