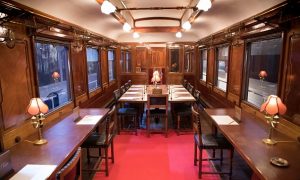 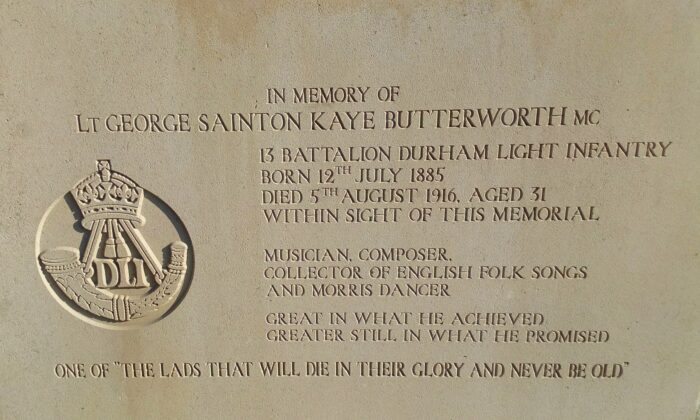 Remembering George Butterworth, Composer and a Hero of the Somme

Because the repertoire of classical music is like a web or a maze that can be entered at any point and followed through any path of happy accidents to completion (were it possible to complete), I tell people who ask me where to begin, “Just jump in anywhere you like and see where it leads.” It may lead perhaps first to other pieces by the same composer of a piece you like, and then to other composers of a similar style, and from main roads to side roads and back, through and around the maze. Or if you prefer, just be a kid in a candy shop. So it happened that my Anglophilia led me into the English corner of the music maze by means of a portal from another daunting maze, British cooking shows!

I found a wonderful program, “Two Fat Ladies,” about these two who ride all over England on a 1996 Triumph Thunderbird motorcycle with a sidecar and cook for people. (Saveur magazine has called it “the best cooking show ever made.”) The show plays wonderful English classical music during long shots of the ladies’ motorcycle cruising through the gorgeous English countryside to that week’s destination.

One week, I found one of these pieces of music so charming that I had to hunt it down to hear again. It turned out to be composer George Butterworth’s “Two English Idylls” (1911). I had never heard his name before. Yet I recognized in this work an instant kindred spirit, like a person you meet and instantly know will become your good friend.

This piece led me, in turn, to the best known of Butterworth’s three works for orchestra, “The Banks of Greenwillow” (1913), equally magical.

And then it was on to the third one, no less lovely, a rhapsody on “A Shropshire Lad” (1912). All three pieces form the most beautiful soundtrack to the English countryside you will ever hear, this side of Ralph Vaughan Williams.

But why did this fellow compose only three orchestral works, I asked? I wanted more of them! I soon learned that Butterworth lived only 31 years, from July 1885 to August of 1916, when he was shot in action by a sniper in the World War I trenches at the Battle of the Somme.

I had already breathed a sigh of relief for those who survived that battle, like writers J.R.R. Tolkien and C.S. Lewis, and composer Ralph Vaughan Williams. It turns out that Vaughan Williams had been a close friend of Butterworth and was greatly grieved by his death, in some ways for the rest of his life.

Far from the stereotype of an idyllic folk-tune composer, as in his “Fantasia on Greensleeves,” Vaughan Williams worked through some very dark pains in many of his works, especially his fourth symphony. Even his lovely “The Lark Ascending” is full of poignancy, when you listen to it aware that it was written in loving memory of those killed in battle. Likewise, the fourth movement of his “Pastoral” (third) symphony, with its haunting, wordless soprano, is a moving elegy to Butterworth and all who were lost.

Butterworth and Vaughan Williams had been close friends as students, traveling into the countryside together to collect and catalog English folksongs and record many of them on a phonograph, to be sure they were preserved. Butterworth himself cataloged over 450 songs, most in Sussex.

Butterworth had found his way as a student at Eton College to Trinity College, Oxford, where he became the president of the University Music Club and also became an expert folk dancer. Before the war, he wrote the three important orchestral works mentioned above and also a number of lovely songs, still frequently performed, plus a few choral and chamber works.

Known by his peers as one of the most talented young English composers of his generation, it is frequently speculated that Butterworth might be even more celebrated today than Vaughan Williams, had he survived the war and been able to achieve the potential that was cut so tragically short.

Butterworth enthusiastically enlisted in the army at the outbreak of the war and was continually promoted up to the rank of lieutenant, finally leading a platoon of rough miners at the Somme who came to respect him enough to name a trench after him. For his bravery in battle in July 1916, during which he was wounded, he was awarded the Military Cross. He did not live long enough to receive the actual ribbon, being taken by a sniper’s bullet in August. His men buried him straightaway out of respect, but the grave location was lost and his body never recovered.

As painful as it feels to miss George Butterworth and the great music he might have composed, I am thankful that at least he did leave some enchanting works for us to enjoy. They sound as fresh today, after over 100 years, as when they were written. Perhaps I will listen to them, in honor of him and all who were lost in that terrible war, on this Remembrance Day, or “Poppy Day,” celebrated in the UK on Nov. 11.