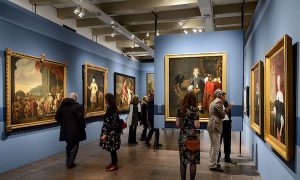 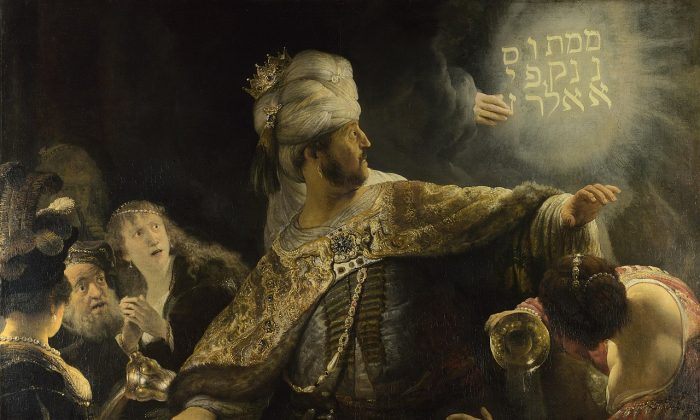 Rembrandt and ‘The Writing on the Wall’

We seem to fashion our lives today by what we choose to indulge ourselves with. I like sushi and you like deep-dish pizza; I like Ravel and you like Beyoncé. These choices seem to even define us.

Our era is not entirely unique. In the 1630s, when Rembrandt was trying to establish himself as a painter of large historical scenes and when biblical stories were still considered histories as opposed to mere mythology, the great painter depicted one biblical story that touches on the price paid for living to merely indulge oneself.

His “Belshazzar’s Feast” tells the story of Chapter 5 in the Bible’s Book of Daniel.

The Story of Belshazzar, the King

In the Bible, Belshazzar is son to the Babylonian King Nebuchadnezzar, the longest-reigning, most powerful king of Babylon and the destroyer of Solomon’s Temple, a holy temple in ancient Jerusalem.

King Nebuchadnezzar stole the sacred artifacts of Solomon’s Temple during its destruction. Then, to add insult to injury and as shown in Rembrandt’s painting, Belshazzar holds a great feast and uses stolen vessels from Solomon’s Temple to drink wine and serve food.

During the feast, however, a hand appears out of thin air and writes on the wall: “MENE, MENE, TEKEL, UPHARSIN.” Belshazzar brings in his magicians and advisers to decipher these words, but no one is able to help.

Finally, Daniel, a noble Jewish youth and servant to the king, interprets the message and, according to the National Gallery, reads: “God has numbered the days of your kingdom and brought it to an end; you have been weighed in the balances and found wanting; your kingdom is given to the Medes and Persians.”

Daniel is rewarded for his interpretation of the message, and Belshazzar is killed that night.

A Message for All Times

So, what might this painting and story mean for us today?

I interpret it as a caution against pride and vanity. Good is rewarded and bad is punished. In this instance, Belshazzar has misused holy artifacts for proud and vain indulgences in pleasure, and, therefore, he is forced to give up his kingdom and his life.

Good Daniel is rewarded for having a sufficient understanding of the divine so as to offer an interpretation of its mysteries. His is a truer and deeper understanding of and connection to the sacred.

Rembrandt uses the drama of the figures to depict this scene well, but he also uses elements from typical Dutch “vanitas” still-life paintings.

Vanitas still-life paintings often contain everyday items that are symbols for the temporality of pleasure and the lack of fulfillment resulting from material pursuits.

Pieter Claesz, a contemporary of Rembrandt, is considered a vanitas painter, and these elements can be seen in his famous “Vanitas Still-Life.” Claesz has included an overturned goblet, a pocket watch, a burning wick that appears to be close to its end, and a skull and bones on top of books.

All of these signify the passing of time or the dregs of life. Claesz is attempting to subtly warn his viewers that earthly pleasures and pursuits all come to an end, and it is best to not waste time.

Rembrandt is not so subtle in his approach. The table is filled with food, wine, and the holy objects that contain them. The figures wear fine clothes and expensive jewelry.

One figure at the back left is entertaining everyone with music, and interestingly enough, the person playing the music and the person listening to the music are the only two that seem to miss the “writing on the wall.”

The typical elements of the vanitas still-life are present. Rembrandt, however, seems to scream at his viewers, warning them to take note of the dangers of pride and vanity. Belshazzar is shown bumping into and knocking over his own glass. The woman in front of him is also shown almost turning her glass of wine upside down: The drama of the scene has overwhelmed her.

Their pleasures and material pursuits no longer matter in the grand scheme of things. The light from the divine message has captivated their attention, but it is too late.

The Pleasures of the Arts

Something more, however, must be said about the two figures distracted from the divine message, despite the drama occurring around them. Why would Rembrandt depict the musician and the listener as the only two not engaged in the drama of the scene? What is he saying about the arts?

It appears that he is saying something similar to what Socrates had said 2,000 years before him: Art that only imitates the pleasures of life is a distraction from deeper, transcendent truths.

In these modern times, our freedoms are often associated only with our ability to choose our indulgences. In Western society, we choose our tastes as individuals, and we fashion our lives according to these choices.

I interpret Rembrandt’s painting as suggesting that if our choices are merely based on our indulgences, then we are never really exercising freedom. If our choices are not based in self-reflection and an attempt to understand deeper truths, then by our pursuit of and addiction to temporal and ephemeral pleasures, we are orchestrating our own destruction.