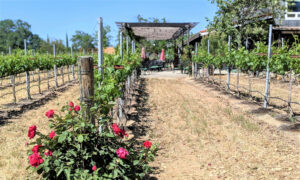 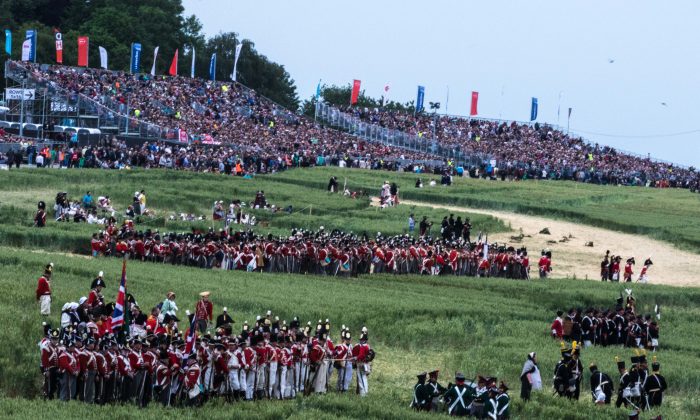 A capacity crowd watches as soldiers gather for a re-enactment of the Battle of Waterloo, held annually in Waterloo, Belgium. This year’s event marked the 200th anniversary of the battle, and was much bigger than other years, with more than 6,200 re-enactors participating. (Mohammed Reza Amirinia)
Destinations

Shots rang out, and cannon and gunfire clouded the air with thick smoke as the opposing armies advanced into battle. Often, visibility became limited and it was hard to see what was going on in the far distance.

Further down, a line of soldiers in red uniforms were shooting their muskets and rifles into the air, while proud riders on horseback rushed around the field watching over them.

I was witnessing—along with about 65,000 others—a re-enactment of the Battle of Waterloo, one of the deadliest battles ever to have taken place in a single day.

The re-enactment is held each year on the original battlefield in Waterloo, a small town 17 kilometres from Brussels in Belgium, on the weekend nearest to the historic date of the battle—June 18, 1815.

More than 6,200 people from various countries took part in the bicentenary re-enactment, which spanned an area of around 2,500 hectares.

This year’s event marked the 200th anniversary of the battle, where Napoleon Bonaparte and his 93,000 French troops went up against the Seventh Coalition, an alliance formed by the most powerful monarchs of Europe under the command of the Duke of Wellington and Field Marshal Gebhard Leberecht von Blücher.

The battle was a dreadful scene, a field of slaughtered humans and horses. There was no escape or protection for anyone when the deadly mortar balls landed. Bloody hand-to-hand clashes involved pistols and swords. Soldiers and artillery advanced forward, but were hampered by piles of dead and injured on both sides. Napoleon’s defeat came after 10 hours of fighting.

More than 6,200 people from various countries took part in the bicentenary re-enactment, which spanned an area of around 2,500 hectares in the province of Walloon Brabant.

The enthusiasts and historians who participated came together to stage the event as accurately as possible. To them, it was not only a celebration of victory, but also a commemoration and tribute to those who died in the battle.

The result was a live, open-air history lesson involving 120 cannons, 330 cavalrymen, and 2,000 infantry. Two metric tonnes of gunpowder were used over two days of re-enactments.

The deadly confrontation in 1815 ended the series of wars that began with the French Revolution of the early 1790s and ushered in an era of peace. It was a significant event that redrew the map of Europe. Following the battle and an uprising in Wallonia in 1830, Belgium was created with the support of Britain and became an independent county. The country is divided into two parts of Flanders (Dutch-speaking) and Walloon (French-speaking)—an artificial creation to make a buffer zone between France and the Netherlands.

The Wellington Museum in Waterloo, a former Bodenheim inn built in the 17th century, was the headquarters of Wellington and his army staff and allied forces during the battle. Wellington stayed at the inn on the night before and the night of the battle. The museum houses the Duke’s bedroom, his office where he wrote his victory report, and his aide-de-camp’s bedroom. There are other rooms dedicated to the two armies of the Seventh Coalition. The museum also displays genuine documents, weapons, and the uniforms of various nations.

As part of the 200th anniversary of the battle, the museum put together a special comparative exhibition exploring the lives and paths of the two legendary characters of Wellington and Napoleon, showing their shared destinies with a display of their personal belongings, such as Napoleon’s bicorne hat along with his uniform, and Wellington’s cape, hat, and telescope.

Memorial 1815, an interactive museum inaugurated in May as part of the commemoration, is a unique presentation of the history of the battle that welcomes visitors to the site. It offers a 4D interactive audiovisual show on a giant screen, animated maps, and other multimedia tools.

Memorial 1815 is a gateway to the site of the battlefield and provides access to the Panorama of the Battle of Waterloo and the Lion’s Mound. The Panorama is a circular building housing a massive painting of the battle. The painting, which measures 110 metres long and 12 metres high, has physical elements in front of it, such as cut-out figures, fences, and bodies made of plaster and papier mache, which enhances its immersive quality. The audio-guided experience gives the visitor the impression of being in the battlefield encircled by the infantry and cavalry of both armies.

The Lion’s Mound, a large conical artificial hill, is situated at the spot where the Prince of Orange (William II of the Netherlands) was wounded during the battle. The Mound, which is 43 metres high and gives the visitors a panoramic view of the site of the battle, was constructed on the orders of King William I of the Netherlands and completed in 1826. After visitors climb the 226 steps to the top, they can pore over maps documenting the battle and use observation telescopes.

Two other interesting places to visit are Quartier-Général de Napoléon Museum at the Caillou farmhouse (Napoleon’s headquarters) and the Hougoumont Farm Memorial.

Mohammed Reza Amirinia is a freelance writer and journalist who has a passion for documentary photography, social photography, and photojournalism, and wishes to share his journey and inspirations through his visual essays. www.amirinia.com