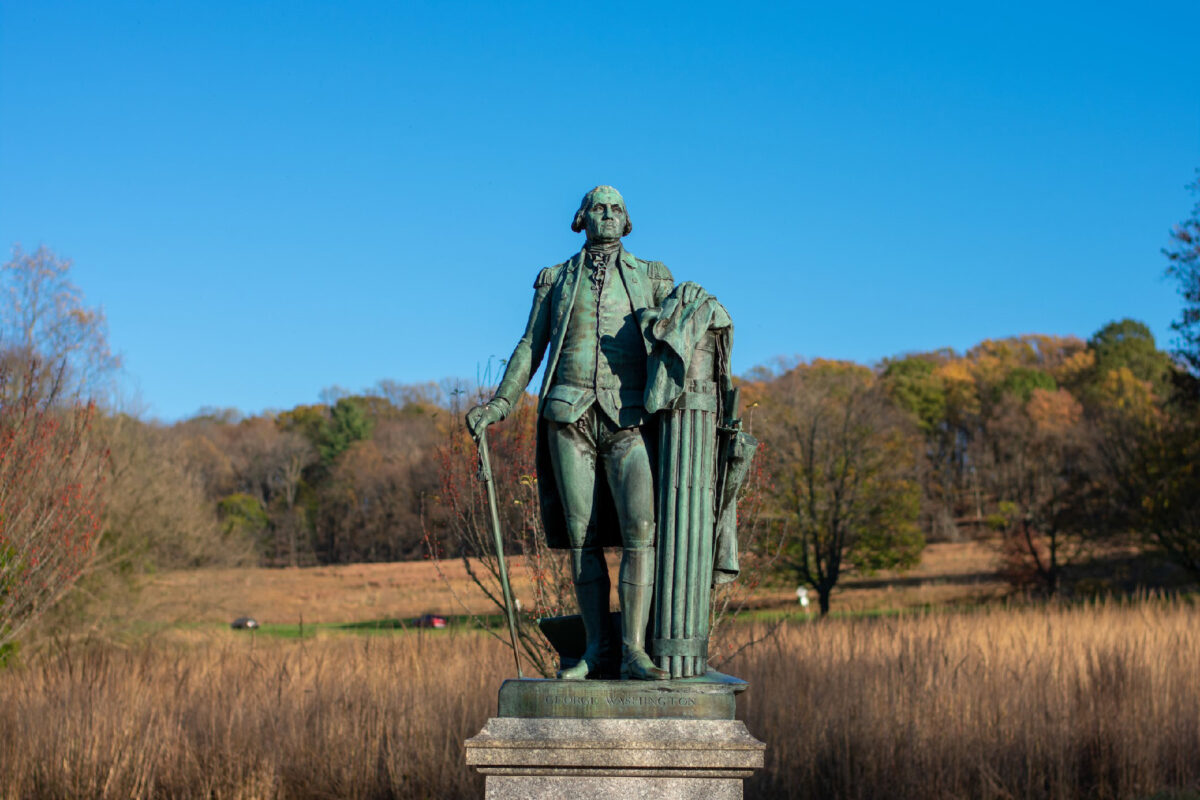 A statue of George Washington at the Valley Forge National Historical Park in King of Prussia, Pa., recalls the first president's time there during the Revolutionary War. (Photo courtesy of Brian Hartnett/Dreamstime.com.)
Travel

In the fall of 1777, Gen. George Washington’s army was reeling from the crushing defeat it had suffered in Pennsylvania. British troops had won the battles of Brandywine and Germantown and occupied Philadelphia. Seeking a winter haven for his disheartened soldiers, Washington settled on Whitemarsh, Pennsylvania. But because it was so close to Philadelphia, the troops were distracted by continual skirmishes.

The Pennsylvania Colony’s legislature had different ideas. It demanded that the Continental Army wait out the frigid season at a safe haven in the countryside, yet close enough to Philadelphia to keep an eye on the enemy and be able to prevent a surprise attack.

Faced with this directive, Washington led his ragtag troops to Valley Forge, an area of rolling meadows 18 miles from Philadelphia that was named for an iron forge on Valley Creek. As light snow fell on Dec. 18, 1777, what was left of the Continentals—12,000 poorly fed, ill-equipped troops weary from battles and long marches—struggled to the place where they would spend the winter. Before the following spring, 2,000 of the soldiers died and a legend of the War of Independence was born.

No battles were fought at Valley Forge. Not a shot was fired at an enemy. Yet the 3,600-acre setting may be the best-known site associated with the Revolutionary War. The struggle for survival in the face of hunger, disease, and the bitter winter cold dramatically conveys the combination of courage and endurance that characterized the colonials’ battle for freedom.

Today, that story is brought to life at the Valley Forge National Historical Park. The welcome center and Encampment Store greet visitors with exhibits and a film. The displays use rare artifacts, weapons, and documents to relate the tale of the encampment. A tour of the park provides a personal introduction to major sites and monuments.

Reconstructed earthen embankments, called redoubts, mark the lines of defense that Washington established around the area. Throughout the park are soldiers’ log huts that represent approximately 1,000 shelters built during the encampment.

The Isaac Potts House, a stone structure that belonged to the owner of a gristmill, served as Washington’s headquarters. Nearby are reconstructions of the places that housed the 150 men assigned to guard the commander-in-chief.

Most cannons at Valley Forge were massed in Artillery Park. There they were stored, repaired, and kept ready for immediate dispatch in case of an attack by the British. The grounds are also dotted by countless memorials, monuments, and historic markers. But more than such symbols of places and events, the real story of Valley Forge is brought to life in other ways.

Artifacts and military paraphernalia recall the victory of spirit over adversity. Copies of correspondences between the brave men who endured such hardships and the loved ones they left at home put a very human face on the suffering. Clothing was inadequate, shoes were hard to come by, and much-needed blankets were even more scarce. The damp, overcrowded huts hastily erected as shelters against the bitter winter failed to prevent waves of typhus, pneumonia, and other diseases from ravaging the ranks.

The first ray of hope arrived in February 1778 in the form of Baron Friedrich von Steuben. A former member of the elite general staff of Frederick the Great of Prussia, this exacting drillmaster offered his services to the cause of the patriots. Because there was no standard training manual for the American troops, the Prussian officer wrote one in French that was translated into English. He chose and trained a cadre of 100 select men whose growing prowess at marching, musketry, and bayonet charges became the model for the entire army.

By the spring of 1778, a new feeling of hope and pride had begun to replace the atmosphere of despair. Following the announcement of the colonies’ alliance with France, the British forces hastily left Philadelphia and moved toward New York. It was a very different American army that pursued them.

The soldiers under Washington’s command wouldn’t celebrate their final victory over the redcoats until 1781 in Yorktown, but they had won another important battle. They had overcome the anguish that accompanied them to Valley Forge. They had been forged into a fighting force with new skills and an increased sense of confidence and pride that eventually would prevail.

Pamphlets available at the welcome center include itineraries that follow the same roads along which Washington’s troops marched, trace major Revolutionary War battles, and explore the history of that fateful winter. Those with special interests may prefer alternative routes that focus on mansions and gardens, arts and artists, and other attractions of the area. For more information, visit ValleyForge.com or call 610-783-1077.