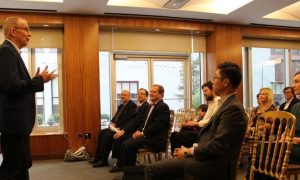 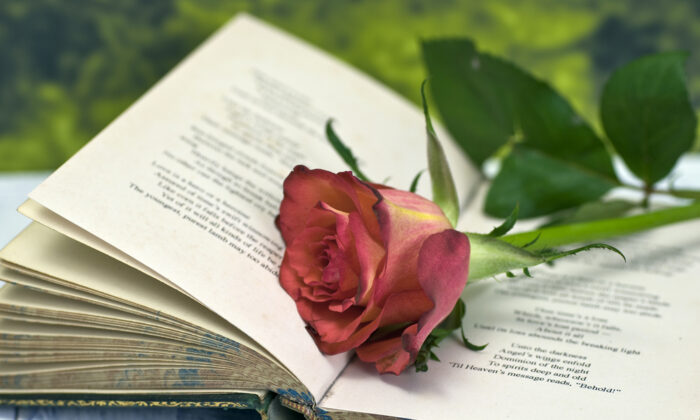 Poetry is associated with love, but it can evoke anything our minds can imagine. (Graeme Dawes/Shutterstock)
Literature

Rediscovering the Art of Poetry

There is something magical about a well-written poem. Using nothing more than ink on paper, one can experience the same thrill as produced by a scene that costs millions of dollars to put on the big screen; one can experience the same momentous payoff that may take hundreds of pages of novel reading to reach. No screen, no battery, no app required—heck, not even electricity required.

And yet, if you were asked to mention a magical experience of reading a poem that you recently read, chances are you would be hard-pressed to produce one. That is the reality of poetry reading today. The really good poetry was written by some dead poet, who is eternally removed from the present. As good as a poem may be, the feeling of connection that one receives from a living writer, whether in a novel or social media post, is simply not there.

The Society of Classical Poets has set out to change that. Over the last decade, the New York-based nonprofit has been supporting the creation of great, new poetry by living poets. These poets still use the techniques that have been used for centuries and even millennia and, in fact, in most world cultures regardless of the language.

The Society hosts an annual poetry competition inviting poets from all over the world to write on any topic of their choosing, so long as the poem uses some form of traditional meter and other traditional techniques, like rhyme or alliteration. (Note: Meter is the measured use of sounds that gives poems their enchanting song-like quality.)

Last year’s First Place winner of the Society’s competition was Joseph Charles MacKenzie of New Mexico. One of his winning poems, “Song of the Rose,” is featured here. It brings to life the simple joy and beauty of love between a couple.

He draws on the timelessly attractive and irresistibly sensuous imagery of the traditional rose.

A healthy rose naturally projects a rich and sweet sensation, and here it is accentuated by the excess of similar rhymes in the poem that seem to fold around each other in a rhyme scheme expressed as abaabb—a scheme that mimics the abundant and folding petals of a rose.

The richness, almost decadence, that we find at the beginning of the poem is, in the middle stanza, tempered by the beauty of the interaction with the divine in our daily lives: “offering the other’s prayers.”

By the final stanza, we have transitioned to a profoundly spiritual message and love between a couple that is of the purest and noblest form. The poet does this with an elegant elevation of imagery, step by step: “the sky looks down upon the rose,/ The stars upon the sky, and God/ On all things, and our hearts He knows.” We have, in just 18 short lines, an entire experience of the spectrum and wonder of love between a couple that is worth savoring.

Mr. MacKenzie’s other poem, “Rimini,” is a masterpiece in its depiction of an ominous atmosphere. Rimini is an Italian coastal city on the Adriatic Sea, and this conjunction of geography sets a sweeping scene for the poem to begin, giving the sense that something vast is about to take place.

And yet it is not merely geography at play here, but history and civilization as we know them, signified in the ancient imperial capital of Rome. This is seen in the contrast between “eternal Rome” and the blank morning sky—the sky itself is described as a “dome” that mirrors the great and ancient domes of Rome.

If Rome is behind us, then what new domes lie ahead? These grandiose images intermingle with the life of our narrator, who has lost confidence in the future and ponders paths abandoned. We get the sense that something grand is left behind, but something grand still lies ahead. But what? But how? The tensions are relatably human yet eerily mysterious.

There is not one mention of autumn in the poem, but the poem perfectly captures that morbid yet exciting atmosphere of the season right on the cusp of death and decay all around, though instead of leaves there are waves: “with each wave’s death dies one more death in me.” Like autumn that follows the fruits of spring, the poem’s narrative follows the joys of spring: “my Aprils fled” and “my fleeting Mays.”

This unstated autumnal feeling is also reflected in an expectation of renewal from the next spring, the traditional time of course of Easter and celebrating the Resurrection—the thinly veiled “resurrected sky.” All of this too is unfolding ominously with a rhyme scheme that runs aaba bcbb. Each stanza’s third line plants a seed that forms the next stanza’s rhyme, the ominous future unfolding before us in verse. This is great poetry!

The Society of Classical Poets invites poets of all stripes to participate in this year’s competition, which is accepting submissions until Dec.31. You can also visit the Society’s website, ClassicalPoets.org, to read more such poetry.

Evan Mantyk is an English teacher in New York and president of the Society of Classical Poets.
TOP NEWS