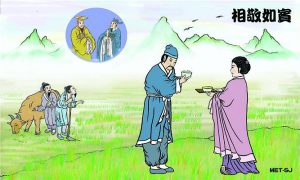 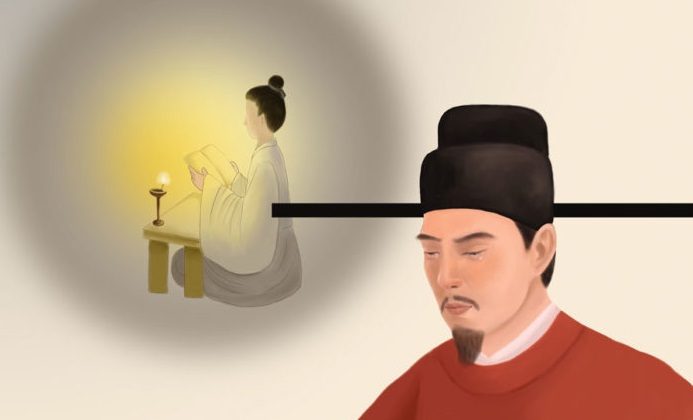 Kou Zhun lived a frugal life despite being a prime minister. When he once fell into indulgence, he was moved to tears and quickly changed his ways after reading a poem left by his mother before she died. (SM Yang/Epoch Times)
Chinese Culture

Rediscovering Our Innate Good Nature in the ‘Three Character Classic’

The text’s short, simple, and rhythmic three-character verses allowed for easy reading and reciting, while the content covered a broad range of topics. It not only helped children learn common Chinese characters, grammar structures, and lessons from Chinese history but also, above all, enabled them to develop an understanding of traditional Chinese culture and the upright ways of conducting themselves as good people.

The very first lesson in the “Three Character Classic” teaches children about their original pure nature:

People at birth
Are good by nature.
Their natures are much the same,
Their habits become widely different.

In other words, people are born innately good. Infants may vary in their personality, but by and large, they share similar qualities of innocence and purity.

However, as the young grow up and are influenced by different people, environments, and experiences, they develop priorities and habits that can lead them to become very different individuals.

For example, some learn to value family and filial piety as being of the highest importance; others learn to cherish money above all things. Some find gratification through material gains; others find meaning in spiritual pursuit.

The following anecdote illustrates how two people who grew up together can turn out very differently. A Chinese writer relates how her father, a carpenter named Jing, was a kind, honest, and respectful man who was well liked by everyone in his village for his good character.

Jing had an old classmate and friend named Wang. One day, Wang invited Jing to his house for dinner.

As they were chatting, Jing saw that an old man who looked like a servant was cooking for them and serving them tea and wine. He asked Wang, “Who is this elderly man?”

When Wang replied, “That’s my father,” Jing was shocked.

Jing jumped up and said to Wang’s father, “Uncle, please sit down.” He helped the elderly man into his seat, poured him a glass of wine, and respectfully said, “Uncle, please forgive my rudeness.”

Then, turning to Wang, Jing said, “I am no longer your friend. You don’t know how to respect your elders.” He picked up his tools and walked out the door.

Jing had learned from a young age that one must be respectful to one’s elders and teachers. Wang, on the other hand, never learned to take this principle seriously. Despite growing up as old friends, the two had developed widely different characters and values.

Kou Zhun Receives a Lesson Beyond the Grave

So what makes a person become like Jing instead of Wang? The answer lies in the next stanza of the “Three Character Classic”:

If foolishly there is no teaching,
The nature will deteriorate.
The right way in teaching
Is to attach the utmost importance in thoroughness.

A person’s innately good nature is maintained through teaching and guidance throughout one’s life. Without guidance, however, this good nature can become corrupted.

The story of Kou Zhun, a prime minister who lived during China’s Northern Song Dynasty, offers an example.

Kou was born into a family of intellectuals. However, his father died when Kou was young, and he was raised by his mother, who wove fabric to help them get by.

Despite their poverty, Kou’s mother taught and urged Kou to work hard so that he could one day make great contributions to society.

Kou proved to be extremely intelligent, and at 18, he passed the national examinations with outstanding results. He was thus among the few to be selected by the emperor to become a government official.

The good news spread to Kou’s mother, who was seriously ill at the time. As she lay dying, she gave a faithful servant a painting she had made.

“Kou Zhun will one day become a government official,” she whispered. “If his character starts to go astray, please give him this painting.”

Kou Zhun eventually became prime minister, but fame and luxury began to go to his head. To show off his wealth and status, he decided to host an extravagant birthday celebration, replete with a banquet and opera performances.

Noticing that the time had come, the servant presented Kou with his mother’s painting. Kou saw that it was a painting of himself reading a book under an oil lamp, with his mother weaving cloth by his side.

Written next to the image were these words:

Watching you endure the hardship of studying under a dim light,
I hope you will become a good person and benefit many others in the future.
Your devoted mother has taught you the virtue of thrift,
In times of wealth, never forget those who are poor, like we once were.

Reading his mother’s words, Kou burst into tears. It was clear he had not lived up to her expectations. He called off the banquet.

The reminder from Kou’s mother beyond the grave saved him from a downward spiral toward greed and corruption. From then on, Kou lived frugally, treated others generously, and carried out his official duties with high morals and integrity. He eventually became one of the most famous and beloved prime ministers of the Song Dynasty.

This story not only illustrates that guidance and teaching are necessary for grooming one’s character, but it also carries a deeper message: As people are innately good, even those who have gone astray can rediscover their good nature and return to their original true selves. As long as they realize their mistakes and are determined to change, it’s never too late.