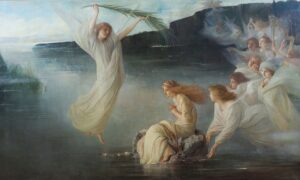 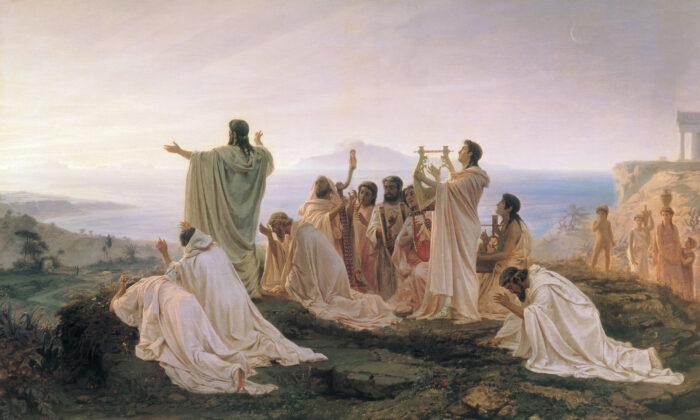 Reconnecting to the Goodness of the Universe: ‘Pythagoreans Celebrate Sunrise’

When I lived in New York, there were nights when I would go to my building’s roof to look out into the heavens. In the city, the tall buildings and their lights would obscure the night sky and dim the brilliance of its stars.

Amid the city’s hustle and bustle, it often felt like we were missing a connection to what was more profound and more essential. It was like we had explained away the universe’s vastness and mysteriousness.

Of course, this wasn’t always the case. Ancients, such as the Greek thinker Pythagoras, placed great importance on the connection that we human beings have with the universe at large.

But who was Pythagoras, and why was he so influential?

We believe that Pythagoras lived approximately 2,600 years ago. The Greek did not write anything himself, and what we know about him comes from secondary sources written over 100 years after his death. Because of this, there is very little about him of which we can be certain.

Yet we know that Pythagoras was actually famous for his understanding of the soul’s immortality, life after death, religious rituals, supernormal abilities, and strict self-discipline. The god Apollo has been associated with him.

The planets harmoniously moved, and their movement produced sounds according to mathematical ratios. These harmonized sounds were heavenly music, and the harmony of music became a way for the soul to be purified and unify with the heavens.

Pythagoreans also saw the planets as divine instruments of justice, and the sun and moon were seen as where blessed souls would go upon death. Thus, we can assume that Pythagoreans believed that the universe rewarded good and punished evil in relation to how well a person could harmonize with the universe’s moral principles and understand how it’s mathematically ordered.

“Pythagoreans Celebrate the Sunrise” is a painting by the Russian-born history and genre painter Fyodor Bronnikov (1827–1902). As the title suggests, the painting depicts a group of Pythagoreans celebrating the sunrise.

In the painting, the Pythagoreans wear light-colored, classical robes. Six of them play musical instruments, and four kneel in reverence to the sunrise. The man who is the focal point stands in front of the others with his arms outstretched as if to welcome the sun.

In the background to the right are four figures—two women and two children—who watch the celebration. In the far background is a temple, presumably the Delphic Temple of Apollo. Apollo was the god of music, harmony, and light.

Reconnecting With the Moral Mysteries of the Universe

So what wisdom might we extract from this painting for our contemporary lives?

First, to me, the leading figure who welcomes the sun with his arms outstretched represents the deep connection that we can have with the universe, a connection perhaps lost to us.

The figure stands with the bottom quarter of his body set against the earth, while the upper part is against the sky. The positioning of this figure might suggest that he is the mediator between—that is, he harmonizes—heavenly and earthly things.

Why does the figure welcome the sun? Welcoming anything suggests hospitality and gratitude. Toward what is the figure being hospitable and grateful? In other words, what might the sun represent? For the Pythagoreans, the sun was a heaven to which good people went. Thus, the sun houses all that is good concerning the human heart and mind. But the sun also provides light, warmth, and growth here on earth by giving of itself and asking nothing in return.

Second, I see significance in the figures who play musical instruments. The Pythagoreans believed that music, if it harmonized with the sounds of heaven, could purify our spirits. Like the figure who welcomes the sun, the musicians too are situated between heaven and earth.

Though it’s unclear if the first Pythagoreans spoke about the arts other than music, generally “music” was a blanket term for the arts in ancient Greece. According to Monroe Beardsley, author of “Aesthetics: From Classical Greece to the Present,” “‘Music’ (mousike) … can mean music, or fine arts in general, or even something like general culture.”

Is it the case, then, that the kinds of art that purify human beings and celebrate the heavens are like the sun in that they house all that is good concerning the human heart and mind, and they give of themselves their light, warmth, and growth here on earth without seeking reward?

What would the arts look like today if they embodied such heavenly qualities? What would civilization look like if we reinvigorated an interest in the mystery of goodness itself and the mysteries of the greater universe in relation to ourselves?

The traditional arts often contain spiritual representations and symbols, the meanings of which can be lost to our modern minds. In our series “Reaching Within: What Traditional Art Offers the Heart,” we interpret visual arts in ways that may be morally insightful for us today. We do not assume to provide absolute answers to questions generations have wrestled with, but hope that our questions will inspire a reflective journey toward becoming more authentic, compassionate, and courageous human beings.