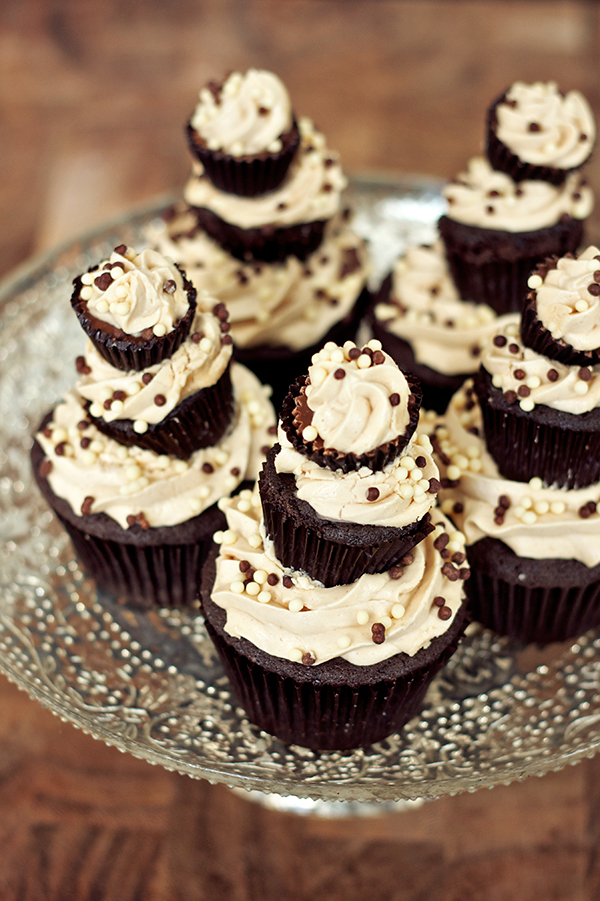 Ever wondered what a Reese’s peanut butter cup would taste in cupcake form? This easy-to-make cupcake recipe will satisfy your curiosity and sweet tooth.

For the peanut butter filling:

In the bowl of an electric mixer, combine the sugar, peanut butter, butter, and vanilla and beat on medium speed until well combined. Use your hands to roll about 18 balls of 1″ diameter and 18 balls of 1/4-1/2″ diameter. Place them on a wax paper-lined baking sheet. Set aside while you make the cupcakes.

For the chocolate cupcakes:

In a medium bowl, whisk together the flour, cocoa powder, baking soda, and salt. In a liquid measuring cup combine the sour cream, milk, and vanilla extract. In the bowl of an electric mixer, beat together the butter and sugar on medium-high speed for 2-3 minutes, until light and fluffy.

Beat in the eggs one at a time, scraping down the sides of the bowl between each addition. With the mixer on low speed, alternately add the dry and wet ingredients, starting and ending with the flour. Mix until just incorporated.

Place about a tablespoon of batter into the bottom of each regular-sized cupcake liner and about half of that into the bottom of the mini-muffin liners. Place a ball of peanut butter filling in each cupcake well and top them with the remaining batter until liners are 3/4 filled.

Bake the mini muffins for 15-18 minutes and regular muffins for 18-22 minutes, or until a cake tester comes out clean. Allow the cupcakes to cool in the pan for 5 minutes, then transfer to a wire rack to cool completely.

For the peanut butter frosting:

In the bowl of an electric mixer, beat together the butter and peanut butter on medium-high speed for 2-3 minutes, until light and fluffy. Add the vanilla and beat until incorporated. Reduce the mixer’s speed and slowly add the sugar. Once the sugar is incorporated, increase the speed to medium and beat the frosting for another 2 minutes. Add the milk and beat again until smooth. Transfer frosting to a piping bag fit with a large star tip.

Pipe a swirl of frosting on top of all of the cupcakes and unwrapped Reese’s. I recommend chilling the cupcakes for about 10-20 minutes before stacking them to allow the frosting to harden a bit and gain some structural integrity. Then carefully stack the cupcake and miniature Reese’s on top of each other, at a topsy-turvy angle if you prefer. Add some sprinkles if you’d like and enjoy!