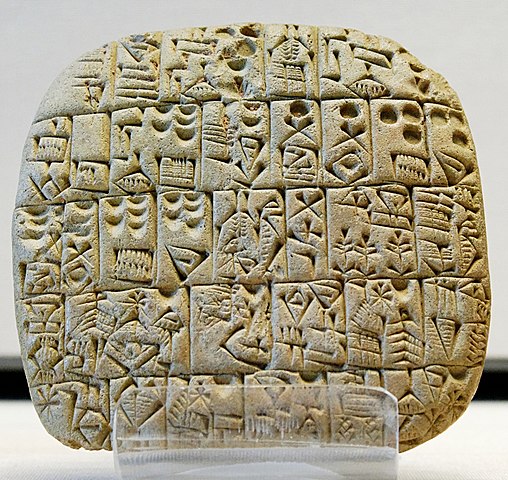 A tablet with ancient Sumerian script, one of the earliest forms of writing. (Public Domain)
American Essence

Reasons Why the Written Word Still Packs the Biggest Punch

The importance of the written word and its impact on society
BY Poppy Richie TIMEJuly 18, 2022 PRINT

Parents may be challenged by their child’s homework frustration—“Why do I have to do these writing assignments? I don’t like to write! I’ll never be a writer, so why do I need to learn this?” How can we answer that? Talking about examples of how writing has always helped us, both long ago and today, could motivate a more serious attitude about this important academic subject. Being able to write now is even more essential for most jobs than it ever was. A brief history of why people even started writing in ancient times might be a good place to begin to persuade this reluctant writer.

The earliest signs of people trying to communicate are pictures in caves and on rock walls. What did early humans paint, and what prompted them to draw these simple sketches? Archaeologists guess that because they had Shamanistic beliefs, they may have used pictographs to communicate with the spirit world about their lives as hunters, since most of the paintings are of animals. “Cave Art” by Jean Clottes, one of many books on this topic, features colorful photographs of Paleolithic art for anyone who is captivated by these curious efforts to leave a record. All we have, though, are guesses about their purpose.

We may not understand much about the cave drawings, but if we fast forward a few thousand years to the ancient written language systems, such as that developed by the Sumerian civilization (present-day Iraq) around 3,400 B.C., there’s more information available to us. We know that merchants needed a written language for commerce. Initially, they were motivated by the need to keep track of transactions, which they did on clay tablets with a script called cuneiform. Later on, by the third millennium B.C., Sumerian scribes were also copying down essays, hymns, poetry, and myths. Ewan Clayton writes on the British Library website, “The earliest form of writing was pictographs—symbols which represented objects—and served to aid in remembering such things as which parcels of grain had gone to which destination or how many sheep were needed for events like sacrifices in the temples. These pictographs were impressed onto wet clay which was then dried, and these became official records of commerce.”

Writing is filled with purpose, sometimes practical as in the Sumerian civilization, and sometimes for other reasons. The basic need to express ourselves in writing is because we are inherently social beings by design, and we need to communicate. From a religious perspective, God created us as His children, and we are like a big family of brothers and sisters. We depend on one another. Science defines us as social beings that coexist in order to survive. Either way, humans want to be in touch, so we need language, both spoken and written. Words convey important messages—the information can be very useful, and even more importantly, words can profoundly move us. Sometimes, the act of talking and writing is even necessary to stay alive, as in the case of Holocaust survivors.

My sister-in-law’s Jewish parents endured a frightening imprisonment in a Czechoslovakian concentration camp. Her mother told her about how victims saved scraps of paper on which to write down favorite recipes. They were starving, so food was one of the most popular topics in their conversations. As they remembered better times by sharing favorite recipes, they kept each other sane in that crazy, inhumane environment. In Germany, a Hungarian Jew named Edith Peer composed the Ravensbrück Cookbook while she was a prisoner at the Ravensbrück concentration camp in 1945. Peer, only 16 at the time, listened to older women comforting each other by sharing their favorite recipes. This inspired her to take the risk of stealing paper and pencils so the women could record family dishes and recipes for special Jewish celebrations. That cookbook miraculously survived and is now in the Sydney Jewish Museum.

Writing under such difficult circumstances provided life-saving stimulation for the women in the concentration camps. Likewise, POWs in Vietnam supported one another through a tapping language they used to comfort and give hope to one another. In June 1965, four POWs imprisoned in Hoa Lo, the famous “Hanoi Hilton”—Capt. Smitty Harris, Lt. Phillip Butler, Lt. Robert Peel, and Lt. Cmdr. Robert Shumaker—invented and used a secret code they shared with other prisoners. Aired on November 13, 2000, on PBS’s American Experience, a video production called “Return with Honor” highlighted their life and death experience in the prison camp. Much like texting today, the prisoners created abbreviations for words since they had to tap their language. “GBU” meant “God bless you.” The men provided comfort and companionship with a sense of humor at times, using abbreviations such as “DLTBBB”—“Don’t let the bed bugs bite!” POW Vice Adm. James Stockdale wrote about the significance of the code in his book, “In Love and War”: “Our tapping ceased to be just an exchange of letters and words; it became conversation. Elation, sadness, humor, sarcasm, excitement, depression—all came through.”

Stockdale demonstrates the power of language when he describes how the abbreviated writing of the POWs conveyed the most profound emotions. Even though it was tapping and not writing, important communication happened and might have even saved lives. What about sentences and paragraphs, chapters and pages of words—what kind of an impact can that have on us? Consider the lengthy book that is the all-time, No. 1 bestseller, the Bible. It would be interesting to be able to have a count of how many people’s lives have been profoundly changed over the past 2,000 years by reading this book. Words can transform lives. That is why writing is so important.

What about other books that were written a long time ago, even before the Bible? Is Homer’s “Odyssey” or Dante’s “Inferno” antiquated and useless? People still read these books and reference them over and over again. Aesop’s fables, written around the fourth century B.C., are often used in our modern age as an enjoyable way to teach morals to children. Shakespeare’s plays are pretty old, too, written in the late 1500s and early 1600s, yet many universities have classes on the most famous playwright in the history of literature. His genius is in his ability to convey universal themes of life and relationships, along with moral instruction. Most of us are familiar with one of his most famous plays, “Macbeth,” about a man who suffers a fall from grace and thus has a need for redemption. We can all identify with this dramatic message about the value of resisting temptation and upholding a virtuous life. It may be old, but it’s powerful!

Without writers who are guided by a moral compass like Shakespeare, Thomas Merton, C.S. Lewis, Victor Frankl, Lao Tsu, and so many others, civilization would surely decline. In fact, we exist and flourish as a nation because of essential pieces of writing, such as the Declaration of Independence, the American Constitution, and the Bill of Rights. Without these defining words for governance, we’d live in a chaotic nation that would inevitably self-destruct. The writers of these crucial documents will always be remembered for their sage and prayerful attention to every word they wrote. All American students should study these works and others that have so powerfully affected the development of our nation, such as Lincoln’s famous Gettysburg Address and Dr. Martin Luther King Jr.’s “I Have a Dream” speech.

When Dr. King gave his immortal speech, he encouraged humanity to believe his vision for a better world. Words that convey optimistic messages are easily found in books, poetry, and songs. The written word is one of the most important gifts we have. When we get stuck in our efforts to express ourselves on paper, we can remember how fortunate we are to receive the words of those who came before us, and perhaps this can inspire us to want to leave our own written legacy.