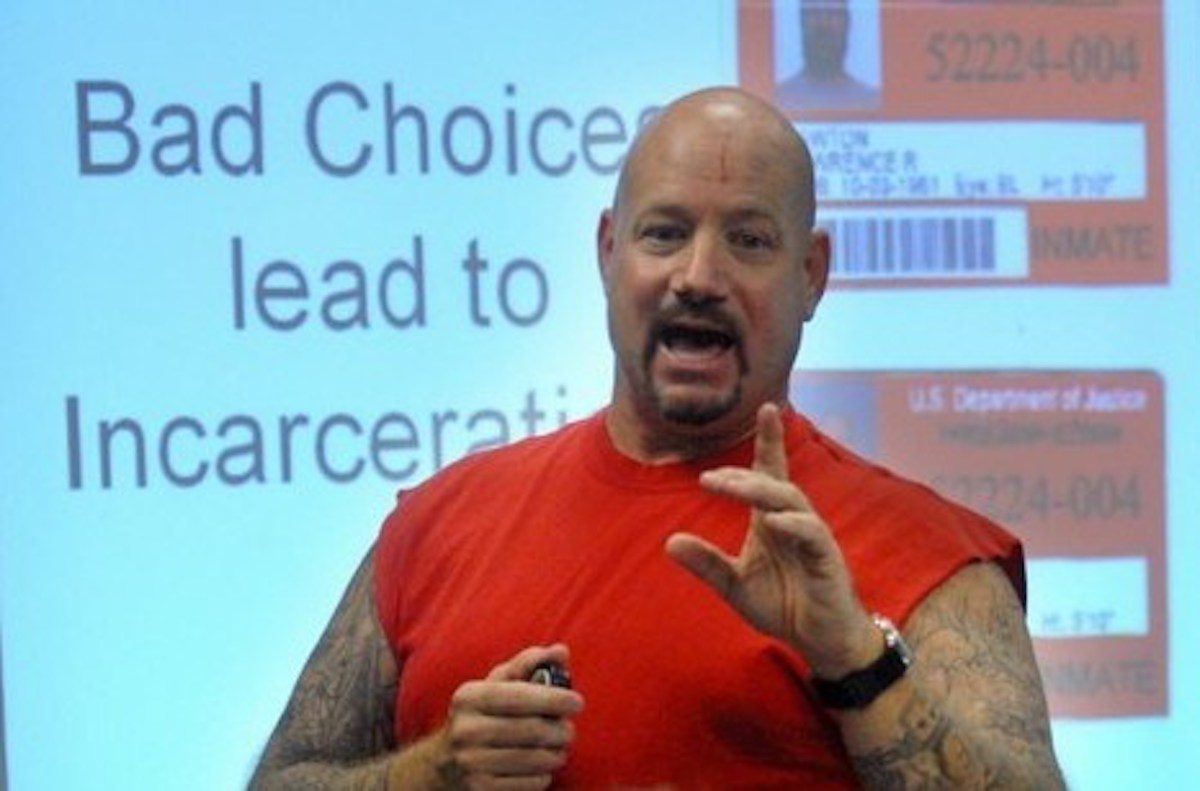 Larry Lawton speaking during his Reality Check program, which aims to keep young people out of prison. (Courtesy of Larry Lawton)
People

Reality Check: From Federal Prison to Helping Our Youth

One bad choice can often lead to a series of bad decisions, and can take a young person down the wrong path. That path often ends in prison. One ex-con learned this lesson the hard way, and has dedicated his life and career to keeping young people out of the criminal justice system.

Larry Lawton is the founder of Reality Check, which is a four-step program designed to tell Lawton’s personal story, show young people what prison is really like, what they will lose if they end up there, and how to avoid and dissolve bad associations. People can voluntarily participate, or they can be court ordered to do so after being found guilty of a crime.

Since his release from prison in 2007, he has made a profound impact on the lives of countless young people, and has even saved lives.

For example, one of the young adults in his program had been dabbling with drugs, and had been caught shoplifting. He was sentenced to Reality Check, and after the program he told Lawton that he had planned to commit suicide that day, but hearing Lawton’s story was so touching that it changed his outlook on life entirely. Now, he’s going into the United States Marine Corps.

Before Lawton was helping young adults stay out of prison, he was one of the most prolific jewelry robbers in American history. His life of crime started at 12 years old, when he was running football gambling tickets for the mob. He made 25 cents on every dollar he made, and often came home at the end of the week with $125.

At age 15, Lawton graduated to grand theft auto, and would make $500 a car after bringing it to a chop shop. Lawton also began doing insurance scams. If there was a way to make money, Lawton was in.

His first jewelry heist was also an insurance job, where he and his partner would rob the store and the owner would collect the insurance. It was after that first robbery that the then 28-year-old Lawton realized jewelry stores were a lucrative target.

“As an entrepreneurial young criminal I said, wait a minute. If I could make this much, I made $150,000 cash in my pocket in that first robbery, I said I can make a lot of money doing this,” Lawton told The Epoch Times.

Learning on the Job

Lawton began casing jewelry stores, robbing them, and learning on the job. He learned that he needed to plan ahead. He needed to know how many people were in the store at a particular time, when the mailman came, where the high value items in the store were, where the emergency alarms and cameras were, and where the security system was kept. Before he did a robbery, he had to know that he could get away with it.

After planning and reconnaissance, he would execute the robbery. He would dress in a suit to look like someone who would purchase an item in the store. Once inside, he would get everyone on the floor and tie them up with flexcuffs. He would then quickly gather the high value jewelry, lose stones, take the security tapes, and escape in anywhere between five and 20 minutes.

Within 24 hours, the jewelry was out of Latwon’s possession after going to the “fence,” and he would receive 30 percent of the jewelry’s value in cash. After getting the cash, he would give the mob a cut for protection. He always gave the them 10 percent, and was always honest about the amount, out of fear of retribution.

After several years of robbing jewelry stores, Lawton finally got caught at his home in Pennsylvania in 1996. The FBI had been on his trail for years, and they were canvasing jewelry stores after one of Lawton’s recent robberies. They encountered a woman who had taken down Lawton’s license plate and she described his method of operation to them.

After the FBI connected Lawton to numerous other robberies, they came for him. It was Monday afternoon around 5 p.m. when his wife walked outside with their 15-month-old daughter to get the mail. Before he knew what was happening, there were men coming through his front door putting guns in his face. Lawton turned around to escape through the back patio, but he was trapped. He put his hands up, and he was arrested.

Lawton was ultimately convicted of four counts of Hobb’s Act robbery under the RICO Act, and sentenced to 11 years in maximum security federal prison. The next 11 years were hell for Lawton, three of which he spent in solitary confinement, or “the hole.” He was stabbed by another inmate, and was tortured by guards. Once a month during an 11-month stretch in solitary confinement, the guards would strap him down to a gurney, beat him, and urinate on him.

“There’s no rehabilitation, and that’s kind of what makes me do what I do today because I don’t want to see people go to prison,” Lawton said. “I want to help families not experience that.”

Lawton would ultimately have his own reality check moment while in prison. He had experienced “the hole” and horrific treatment at the hands of the guards, but it was until his friend hung himself that the reality of Lawton’s life sunk in.

“Everybody has a bottom, and it’s whenever that person hits that bottom is when true change comes about,” Lawton explained.

Lawton was released on Aug. 24, 2007, and stepped into a world that had completely changed. He had never seen a modern cellphone, and cars looked entirely different. On his bus ride from prison, they stopped for food and gas. He walked into a Subway and tried to order a sandwich. After so many years of being told what to do, he couldn’t make a choice. He started to shake, and ran back to the bus.

It wasn’t until he reached a halfway house in Tampa, Florida that he started to feel somewhat normal again. However, he still couldn’t make decisions. It wasn’t until he went golfing with a friend, who caught on to Lawton’s issue with indecision after he had been copying his lunch order every round. One day when they were golfing, Lawton’s friend made him order for himself.

Within two weeks of Lawton’s release in 2007, he started Reality Check in an effort to keep young people out of prison after speaking with a friend’s son. The friend had caught his 16-year-old son smoking marijuana, and after trying to discipline him, his son talked back in a disrespectful manner. The friend asked if Lawton would speak with his son.

Lawton sat down with his friend’s son, and showed him photographs and told him about his experience in maximum security federal prison.

The friend called Lawton several weeks later and told him that his son said he did not want to end up where Lawton did. Instead of making the bad choices that would have otherwise likely sent him to prison, the son ended up graduating college and is now a working professional.

Lawton also works with police departments across the country to develop positive relationships with their respective communities. Furthermore, he’s an honorary police officer, and was recognized on the floor of the United States Congress for his work in 2013.

“It’s not only important to do what I do. It’s necessary. It is a must.”