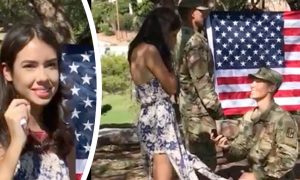 After realizing that he wouldn’t have the opportunity to propose to his girlfriend at Disney World as she always dreamed of, a clever and creative boyfriend named Holt came up with a truly Disney way of bringing the Disney Princess experience of a lifetime to the woman he loved.

The young couple which had dated from high school through college were joined by friends and family dressed in costumes from some of the couple’s favorite movies, with music flowing through the scene as the unsuspecting girlfriend was blindfolded by several friends after finishing work and driving her to her home where she was greeted with a beautiful dress and a princess makeover.

With props galore and extra skits performed by friends and family as they walked her over to her final destination, she was met by her own night in shining armor, Holt, he finally popped the question in the Disney fashion she had always wanted. Tears of joy came down her face as friends and family cheered for the moment they had all been waiting for almost half a decade to finally see happen. This heartwarming story shows that anywhere, anytime, dreams really can come true.