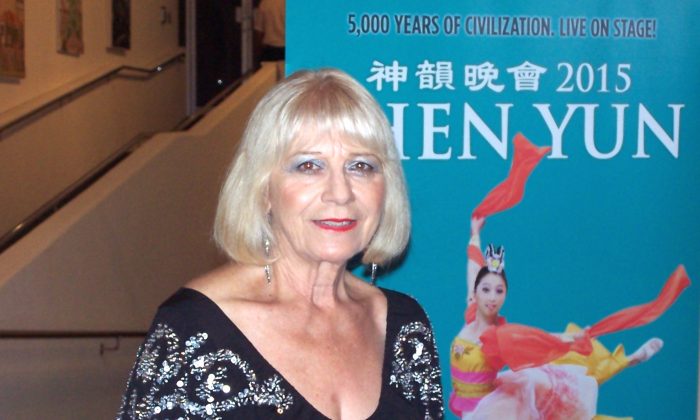 GOLD COAST, Australia—Shen Yun Performing Arts wrapped up its second of three performances at The Arts Centre Gold Coast on Saturday Jan. 31. Smitten by the radiant beauty and spirited performance, the audience applauded throughout.

“It was really quite spectacular,” said Lucy Cole, managing director and owner of real estate agency Lucy Cole Prestige Properties. “I love the youthfulness of it. I love the dances and the smiling and gracefulness of it.”

Ms. Cole’s company is associated with the finest in residential real estate on the Gold Coast and has handled the sale of many of its iconic properties. She has won the Real Estate Institute of Queensland’s ‘Salesperson of the Year’ three times and is a well-respected business identity. Ms. Cole is actively involved in large range of community groups and charities, including being a sponsor and a patron to many.

Ms. Cole was moved by the Shen Yun performance saying that she would have many experiences and memories to take away with her.

“There are so many beautiful stories and they do it so beautifully and gracefully. The methods they use are quite incredible, and in a short space of time, what they bring to the show leaves a lot to think about,” she added.

‘Recommend It to My Staff’

Through the universal language of music and dance, New York-based Shen Yun takes the audience on a journey filled with stories and legends and scenery spanning from the beginning of China’s history all the way to modern day. Its mission is to revive 5,000 years of divinely inspired culture.

“Chinese dance is at the heart of what Shen Yun does. Known for its incredible flips and spins, and its gentle elegance, it is one of the most rigorous and expressive art forms in the world,” The Shen Yun website explains.

“The dance is quite unique. Everything is so graceful,” Ms. Cole praised the beauty and gracefulness of the dancers and their costumes. “It goes from tip to toe from the head to the end of their fingers. So it is quite amazing.”

She was also impressed with Shen Yun’s digitally animated backdrops, which creates vivid animated settings that expand and transform the stage. From open grasslands to Himalayan peaks, to sacred halls, to heavenly scenes—the backdrop transports the audience to different realms.

“It is just such a unique performance that people should really come and see it,” Ms. Cole said. “I would recommend it to my staff as well, I have a big staff.”

“I appreciate the different sounds. Absolutely beautiful, really nice. I like the combination,” said Ms. Marsh.

Shen Yun features a live orchestra that seamlessly combines traditional instruments from East and West. “The ensemble at once expresses both the grandeur of a Western orchestra and the distinct sensibilities of China’s 5,000-year-old civilization,” says the Shen Yun website.

Ms. Marsh sings and plays the guitar and piano. She felt the music captured and enhanced the mood of the performance. “You get the feeling, the vibe [that] the music takes you [on] with the story, and it is complete. Really interesting, I loved it!”

She said, “I appreciate the different sounds—Absolutely beautiful! Really nice!”

“[I’m] also very touched and humbled to see such exquisite performers,” she said, particularly commenting on the hand gestures of the female dancers.

“I appreciate the movement and the hands. The girls make it look so easy but I know the technique is brilliant. They are very, very good technicians.”

Ms. Marsh felt the highlight of the Shen Yun performance was in the dance The Power of Compassion.

In the dance, a police officer slips and injures his knee while trying to arrest a young man who practices Falun Dafa. The compassion of the Falun Dafa practitioner he was about to arrest brings about a change of heart and a positive ending.

The Shen Yun website explains: “In 1999, the Chinese Communist Party (CCP) initiated a persecution campaign against Falun Dafa, a meditation discipline based on the principles of truthfulness, compassion, and tolerance.

“Practicing Falun Dafa is more than just meditation, it is a state of mind oriented towards self-betterment and putting others first. These qualities have taken root in many Shen Yun performers’ daily lives and flow naturally from their artistic expression.”

“It’s quite eye-opening to see something so expressive, and that I thank them for, because we would never see this otherwise. They really portrayed something very gentle but exquisite and unique. I thank them for that, it’s lovely,” Ms. Marsh said.