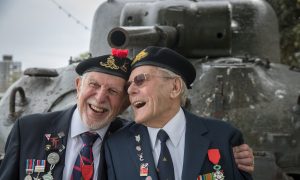 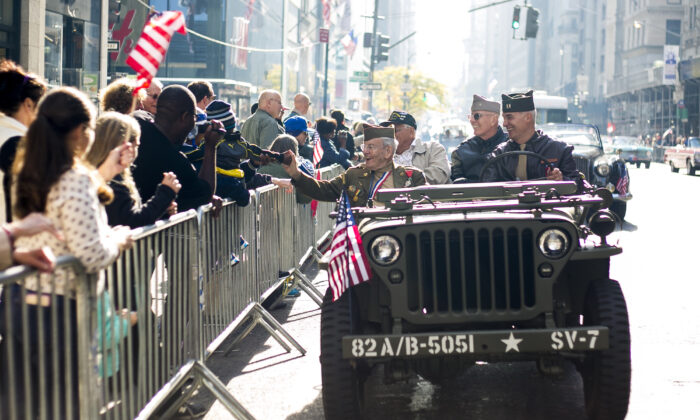 Readers Respond: What Lessons Have Veterans Taught You?

In time for Veterans Day this year, we asked: What lessons have veterans taught you? How have they changed your life? Here are a few of the many responses we received.

My father was a combat veteran from World War II, surviving the war with a Silver Star and Purple Heart award. He came home to marry his sweetheart, earn a living, and raise me and my two sisters. He brought a few things with him from his flying days, and never really talked about it very much. In fact, I found out more about my father’s “ventures” after watching a pilot episode of a “Vets” TV series than I’d ever learned from him directly.

Growing up, I watched him work long hours to provide for us, working second jobs, to make sure we had new shoes when the time came and to save for the occasional family vacation. He tried getting back into baseball, a sport he’d come to love because of his dad. The German bullet wedged in the back of his femur, however, kept him from getting back to his old playing level. But, to him, it was “OK, I have other things to do in life.”

What he taught me, in addition to many other lessons of life, was that it didn’t necessarily matter what you were, or what you did, during “yesterday.” Of course, you were the sum total of all your yesterdays good or bad, but it never defined you to the point where, when you woke up the following morning, it determined what you could or could not accomplish. He always said that you defined your worth in life every day, by what you got accomplished each day.

So, that was one of my many lessons from “my” veteran—it’s not necessarily what you’ve done before, but what you intend to do today, and for the rest of your life, and to make sure it’s a worthwhile goal.

It’s a lesson I strive to honor, every morning I have the privilege of waking up and greeting a new day.

As a young boy growing up in the ’50s in South Carolina, I always enjoyed hearing the war stories of veterans, many of whom never really recovered from their experiences in the war and died young from their abuses of their body. There were many who did not talk about their experiences in the ’50s, and I became aware as they aged and stories emerged of their experiences. [It] surprised me how they came back from the war, went back to work, married and had families, and were role models that influenced me and others for the rest of our lives.

One such Marine veteran (I played with his kids and the Japanese weapons he brought home) I had known all my life was the most humble man in my church. He was wounded five or six times in major battles in the Pacific, but only three were documented, with the last wound causing him to limp the rest of his life. He never complained. He worked for the railroad for the next 40 years and would never consider taking disability [benefits].

When I joined the Marine Corps, he was more proud than me. His last words to me before I shipped out to Okinawa, where he was shot in the hip, which caused his disability: “Don’t let me down, Marine!” I never did.

Back in 1999, my second daughter received an assignment from her junior high history teacher to interview a veteran and report on her findings.

My father had served in the Korean War, but was not available at the time, so I called the local nursing home in our home town to inquire if they had a veteran receiving care and if we may interview him. The nurse who answered said that she had a few residents who served in the armed forces and asked that I hold while she checked who was available. She returned on the line and said, “Have I got a veteran for you! He is George Marquardt, who flew many missions in World War II.”

Upon arriving and being introduced, we soon learned that George W. Marquardt served as captain in the 393rd Bombardment Squadron. Although he was regularly assigned to the Up An’ Atom, he flew in the mission to bomb Hiroshima as the aircraft commander of the Necessary Evil, the aircraft assigned to take photographs of the event. He also flew the Enola Gay during the Nagasaki bombing mission in August 1945.

Captain Marquardt could not speak due to a condition with his throat, but graciously agreed to talk with us through gestures, answering yes and no questions, and writing notes to my daughter’s inquiries. He shared with us many photographs and gave us a pamphlet that described and reported on the mission over Hiroshima.

He shared about many heroic and dangerous missions he flew during his service during the war: sorties over Tinian in the South Pacific, his training in Wendover, Utah, and his personal experience over Hiroshima.

During his training in Wendover, he was instructed that shortly after the bomb was dropped, they were to steer and bank the aircraft sharply away from the city and prepare for the bomb blast. He remembered that he and his crew were a bit perplexed; in all their bombing missions, they had never felt the shockwave from their bombs.

As his crew shot photographs, he piloted the maneuver, just as they had trained. Captain Marquardt reported that when the shockwave hit the bottom of the plane, “It felt as if a great big hand had come out of the sky and smacked our aircraft extremely hard” and it took a few moments to gain control over the aircraft again.

He remembered seeing the blast and then watching the shockwave ripple-out across the city, where everything on the ground turned black. He lamented, “I knew right then that thousands of innocent people had just died.” He also reported that he and his crew were mostly quiet on the flight back to base. He said that he prayed and hoped that God was with us.

The nurse had been checking on us periodically throughout the interview, and I sensed that we had probably overstayed our planned time with Captain Marquardt. I wanted my daughter to understand the gravity of our experience; I told the Captain: “When you performed your service during the war, I was not born yet, and neither was my daughter. I thank you for doing what you did. It is because of you and many others that we continue to live in this country I love, and we still have the freedom that we enjoy.”

I had begun to get a little teary, and a couple of tears appeared as I expressed my gratitude. Captain Marquardt, at this point, was completely overcome and tears were running down his cheeks.

At this point, the nurse poked her head in the room. She looked a little confused, her voice was stressed when she asked, “Is everything OK?” A smile spread across Captain Marquardt’s face as he shook his head in the affirmative.

Through our experience with Captain George W. Marquardt, we beheld one who lived that part of history. My love for my country grew immensely as I found that Captain Marquardt loved it as well. Our freedom is delicate and requires great care, and each generation must protect it as it is passed from one generation to the next.

My Uncle Bill was critically wounded on the cold steel floor of his B-17, riddled by ack-ack over Bremen, Germany. While his plane limped back to England on two engines, he yelled out to his mates that he “wasn’t dead, yet.” His wounded co-pilot lay beside him. The gutsy bombardier flew them all home.

On the same day, I was born in Batavia, N.Y., on Sept. 26, 1944. Uncle Bill spent months recovering from the wounds that scarred his abdomen and left pieces of shrapnel near his heart. He was my childhood hero, and I’m sure I must have annoyed him with my undisguised hero-worship, but he never let on until we both had grown older that my little-boy attention gave him the faith and energy to heal his terrible war-born anguish.

Although Uncle Bill died years ago, our story lives on. I’ve celebrated my birthday for many years in many different places, but my Uncle Bill hasn’t missed one party, and I know he will be with me wherever Sept. 26 happens to be next year.

I learned respect through my father, who taught me [to have the] courage to do what I think is right. My dad served in World War I and World War II.

And after my brother got back home from Vietnam, I learned love is the armor of life.

Then I learned from my nephew who served in the Iraq War to use unstoppable determination for success in my life.

Thank you for this opportunity. Reaching into the bank of love and respect for our veterans brings many emotions that I would not ever want to leave behind.