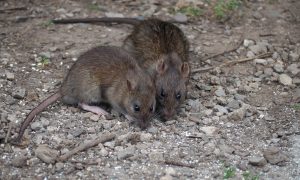 NYC Is Winning Some Battles Against Rats, but War Far From Over
0 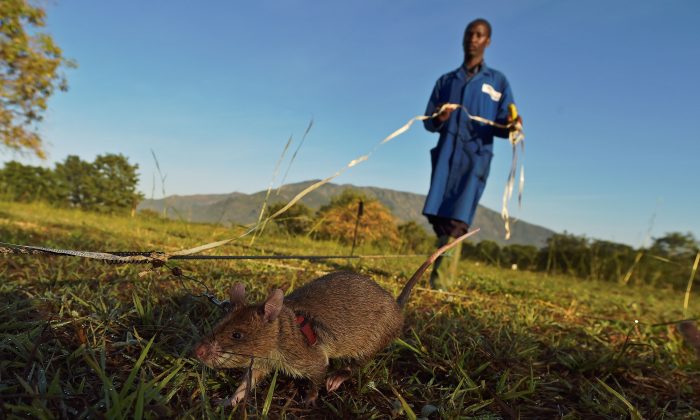 An African giant pouched rat sniffs for traces of landmine explosives at APOPO's training facility in Morogoro on June 17, 2016. APOPO trains the rats to detect both tuberculosis and landmines at its facility. (CARL DE SOUZA/AFP/Getty Images)
Animals

Rats: Not Quite as Bad as You Thought

Imagine it’s a brisk morning, and when you’re about to snap up the morning newspaper at the doorstep, there’s a little extra something that catches the eye. It moves, it shivers, its doe eyes yearn. Poor little kitty, is it? An abandoned puppy? An injured critter of the wild? Our inborn nature of compassion kicks in.

But what if this gift from nature were a rat?

Is there a more quintessential villain than this scorned, repugnant, and reviled creature? What else compares to this scourge to antiquity of many a house and yard, barnyard and junkyard, cellar and attic, landfill and sewer that stands accused, tried, and convicted as transmitter of fleas, disease, and pestilence, and said to be responsible for the Black Plague, the pandemic of the 14th century that wiped out 75 to 200 million people?

The lone wolf of species, the rat seems to be unwanted wherever and whenever save to predators. Fittingly, “rats” is lexis for cursing. “To rat” is to tattle; “rat fink” describes someone who tattles. The word stands in for a scoundrel, or double-crosser, immortalized in the line James Cagney never said: “You dirty rat.”

The nomenclature for a group of cows is “herd,” “flock” for geese, and “school” for fish. But for a rat, it’s “mischief,” which, really, is the tip of the iceberg in how we humans really feel about them. Rattus norvegicus, the common brown rat, or Rattus rattus, the black rat, by any other name still smells like a rat, which everyone knows is another contortion for something bad going on.

New York City appropriated $600,000 last year to combat rats, which, to the sardonic relief of New Yorkers, do not outnumber people as originally believed, reports the Los Angeles Times.

California’s drought, officially over in 2015, is still blamed for the resurgence of rats in the Golden State. A CBS affiliate in Los Angeles reported rat infestation on campuses in the Santa Monica-Malibu Unified School District, where district officials scurried to stomp out what one official punned “the rat race.”

Across the Atlantic, the British daily The Telegraph recently stated that the French capital is in the throes of “its worst rat crises in decades.” The proliferation of the rodents has forced the closure of parks amid fears that children could be bitten or infected by disease. Rat sightings and dropping are common in popular tourist destinations like the Louvre, says the paper.

It probably isn’t far-fetched to proclaim that the only good rat is a dead rat. But not everyone may feel that way. In a pixyish twist of Shakespeare’s words All that is gold does not glitter, rats could epitomize the inverse. Beneath a façade of nastiness is a good-sided underbelly. Like in literature and indeed like life itself, not every hero is completely pure nor every villain bad through and through.

For starters, rats are used to save lives, but not just as sacrificial lab rats for medical research. An organization in East Africa known as APOPO exploits the rat’s keen sense of smell and trainability and turns them into skilled rats, called “heroRats,” to carry out mass screening for tuberculosis among inmates of crowded prisons in Tanzania and Mozambique. Their light weight is also useful in their sniffing out landmines in Angola.

Dr. Karen Becker, describing herself as a “proactive veterinary,” expresses an uncommon viewpoint in her regular column for the Huffington Post, that rats are not “the dirty, disease-infested creatures of folklore. [They] are affectionate, clean, sensitive and easy to train.”

Dr. Becker’s stance is the one often taken by rat pet owners in the United States.

In the Far East, rats have traditionally been regarded the way Westerners regard rabbits—cute and potentially edible. In the Hindi-speaking world, the rat has a revered place in society. It is the mount of Lord Ganesha, the Hindu god of success.

“Give a rat a bushy tail and you have a squirrel,” says Josette Benchetrit, a clinical psychologist in Paris, who launched a petition, which has garnered tens of thousands of signatures, to strive to end to what she sees as a “rat genocide.”

“Rat phobia is an unwarranted social phobia, like spider phobia,” says Ms. Benchetrit. “These poor unfortunates are being mercilessly killed because they’ve been designated by society as scapegoats to be eradicated.”

Pro-rat activists add that rats are beneficial to the eco-system through consumption of garbage and waste.

That being said, how surprising it would be to see a worldwide push to save the rat pick up steam any time soon.

Tim Wahl is an ESL teacher and a writer in Los Angeles, California.  His book “Footballogy: An English Learner’s Guide to American Football” is to be released in summer 2018.