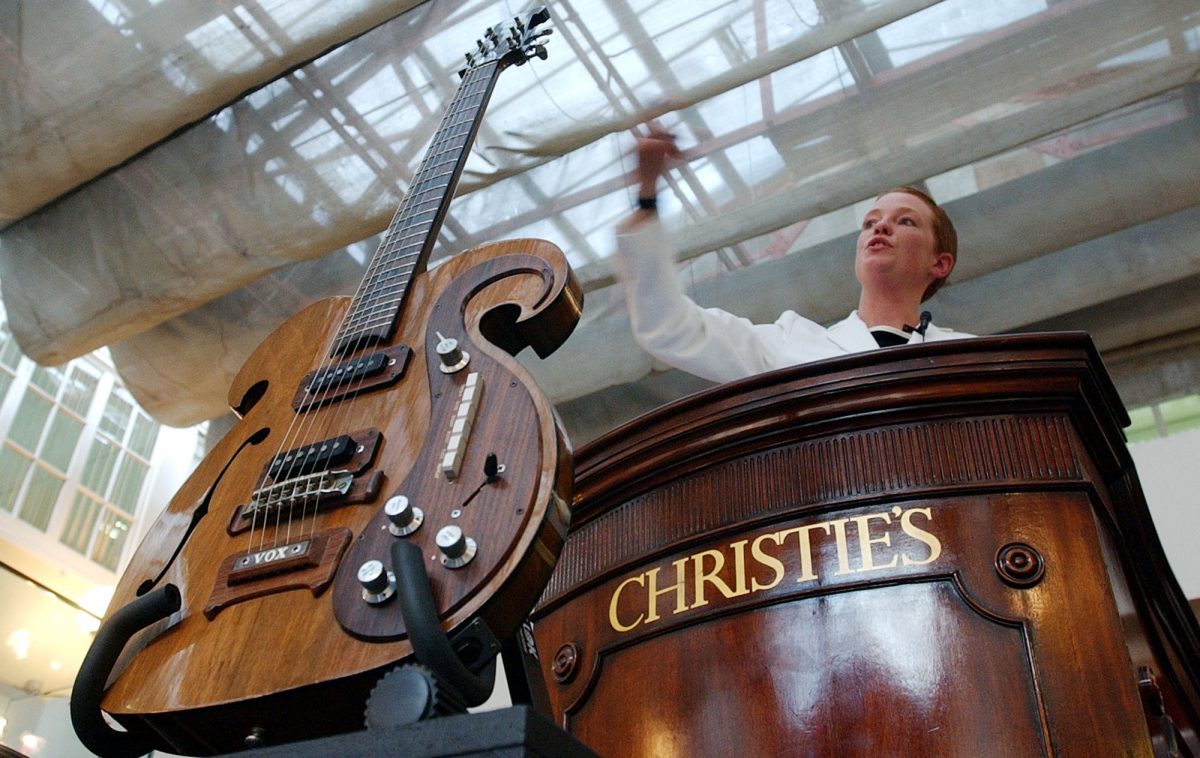 A 1966 custom-made VOX Kensington guitar is displayed in front of Helen Bailey a Christie’s auctioneer as she takes bids for other unseen lots during a Pop music memorabilia sale at Christie’s auctioneers in London, Wednesday, May 5, 2004. The guitar sold to a commissioned bidder for 117,250 British pounds, (US$205,188). The guitar will be auctioned off later this month by Julien’s Auctions at the New York City Hard Rock Cafe. (AP Photo/Richard Lewis)
Arts & Culture

Rare VOX Beatles Guitar to Be Sold in Huge Auction

The annual Julien’s Auctions Music Icons auction will include a wide array of music memorabilia from a range of icons including Elvis Presley, David Bowie, The Grateful Dead, Madonna, Jimi Hendrix, David Cassidy, Bette Midler, Beyoncé, Michael Jackson, and others. Also on sale will be the original eagle cape that Elvis planned to use during a 1973 Aloha From Hawaii concert, but it proved too heavy to wear. A lighter version was used during the performance.

“People have a love affair with their celebrities and their icons and we try to make it a fun time,” said Martin Nolan, executive director of Julien’s Auctions.

According to Nolan, the highlight of the auction will be a custom-made VOX guitar. In 1967, Lennon gifted the instrument to “Magic Alex” Mardas. Nolan expects the instrument to sell for “significantly higher” than the estimated value of between $200,000 and $300,000.

In total there will be 400 lots for auction, and The Beatles guitar will be sold near the end as lot 384.

The auction will run from 11 a.m. until about 7 p.m. with a short break around 2 p.m. It is open to the general public and people can join at any time during the day. Buyers will be able to register and bid in person on the spot, by phone, and through a live online streaming connection from anywhere in the world.

“Auction day is always high-energy, high adrenaline. It’s a fun day,” said Martin, who added that it’s easy to get caught up in the excitement. “It’s like going to a sports game.”

Martin is also expecting a lot of social media hype over the items, and the Twitter hashtag is #juliensauctions.