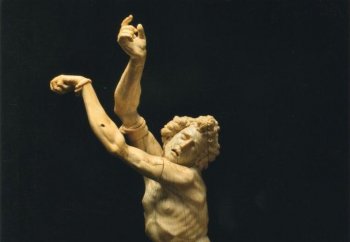 IMPRESSIVE IVORY: The Saint Sebastian by Jacobus Agnesius is a rediscovered masterpiece and is very large for an ivory sculpture. (Maggie Nimkin)
Arts & Culture

By Evan Mantyk
Print
NEW YORK—Billed by art specialists as “one of the largest and most spectacular ivory statues ever created,” a statue depicting Saint Sebastian will be on exhibit at Moretti Fine Art and Adam Williams Fine Art, in Manhattan, from Jan. 21–Feb. 4. The statue by Jacobus Agnesius, circa 1638, is valued at $4.75 million.

Saint Sebastian was a Roman soldier who was secretly a Christian and was killed for his faith in 288.

“With its luscious yet exacting portrayal of the human body, its grim depiction of emotional and physical suffering, and its suggestion of the exaltation of religious release, Agnesius’s Saint Sebastian is almost without parallel,” said Andrew Butterfield, the Renaissance and Baroque specialist in possession of the statue, in a statement.

The statue is 2 feet tall, making it twice the size of what is considered a large ivory statue, according to fine-art specialists Andrew Butterfield and Fabrizio Moretti. The two are jointly holding the exhibit, which coincides with Old Master Drawings Week sales being held by the auctions houses Christie’s and Sotheby’s.

“Given its scale and its quality, it was almost certainly commissioned for a prince or other royal patron,” according to a statement by Butterfield and Moretti.

The exhibit, titled Agony, Ecstasy, Ivory: The Saint Sebastian of Agnesius, A Rediscovered Masterpiece, will also include an oil painting by Giovanni Antonio Canal, circa 1744. The piece by Canal, commonly known as “Canaletto,” depicts with grandly intricate detail a prison building amid brilliantly lit city life in San Marco, a borough of Venice. The painting passed into the possession of King George III, who ruled Great Britain in the late 18th century.