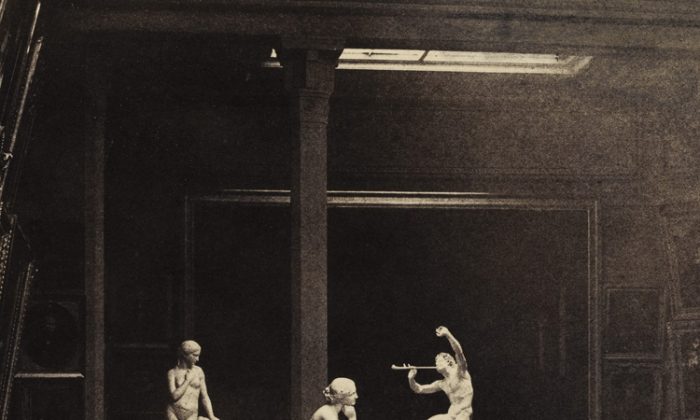 Gustave Le Gray captures the famous Paris Salon of 1852 in an album of prints. (Courtesy of Sotheby’s)
Arts & Culture

A rare collection bearing the authentic stamp of Gustave Le Gray, the brilliant French painter, photographer, and teacher, will be unveiled at Sotheby’s Paris on May 15.

In the photographs, Le Gray captures the famous Paris Salon of 1852, an exhibition of the Academie des Beaux-Arts in Paris, one of the greatest art events in the world, at the Palais Royale.

Estimated to achieve between $315,000 and $375,000, the album, containing nine prints, is one of the most eagerly awaited lots in the photography sale.

There are only two copies of the historical album in existence. One is in the collection of Musée d’Orsay in Paris; the other is in the hands of Sotheby’s.

Le Gray was a central figure in French photography but not at the time he shot the salon. His career had yet to take off. That happened four years later when he debuted his maritime images at the Photographic Society in London.

“That was the starting point for his international success that remains undiminished to this day. He is now considered one of the most coveted 19th century photographers at auction,” according to Sotheby’s, so this is a rare collecting opportunity.

His noteworthy approach to photography caught the eye of Napoleon III, many government officials, and a host of well-known aspiring students.

Le Gray was commissioned to document the principal works of the 1852 salon by Philippe de Chennevières, the inspector of provincial museums, who was in charge of the exhibition of living artists and was head of the Louvre.

Of the two known copies of the album, each has the same dark-green shagreen binding, the one at Sotheby’s only differing in its elaborate embellishment, such as the gilded, crowned monogram “M” on the back cover.

“The monogram may potentially be attributed to Mathilde Laeticia Wilhelmine, cousin of Napoléon III,” according to the press release. “At the time of Le Gray’s commission, the director general of the French national museums and authority over the institution in charge of organizing the Salon was Comte Emilien de Nieuwerkerke, who between 1846 and 1869 was officially the companion of Princess Mathilde.”

Princess Mathilde, a patron of the arts, was very much involved in the Paris cultural scene and presided over her own salon.