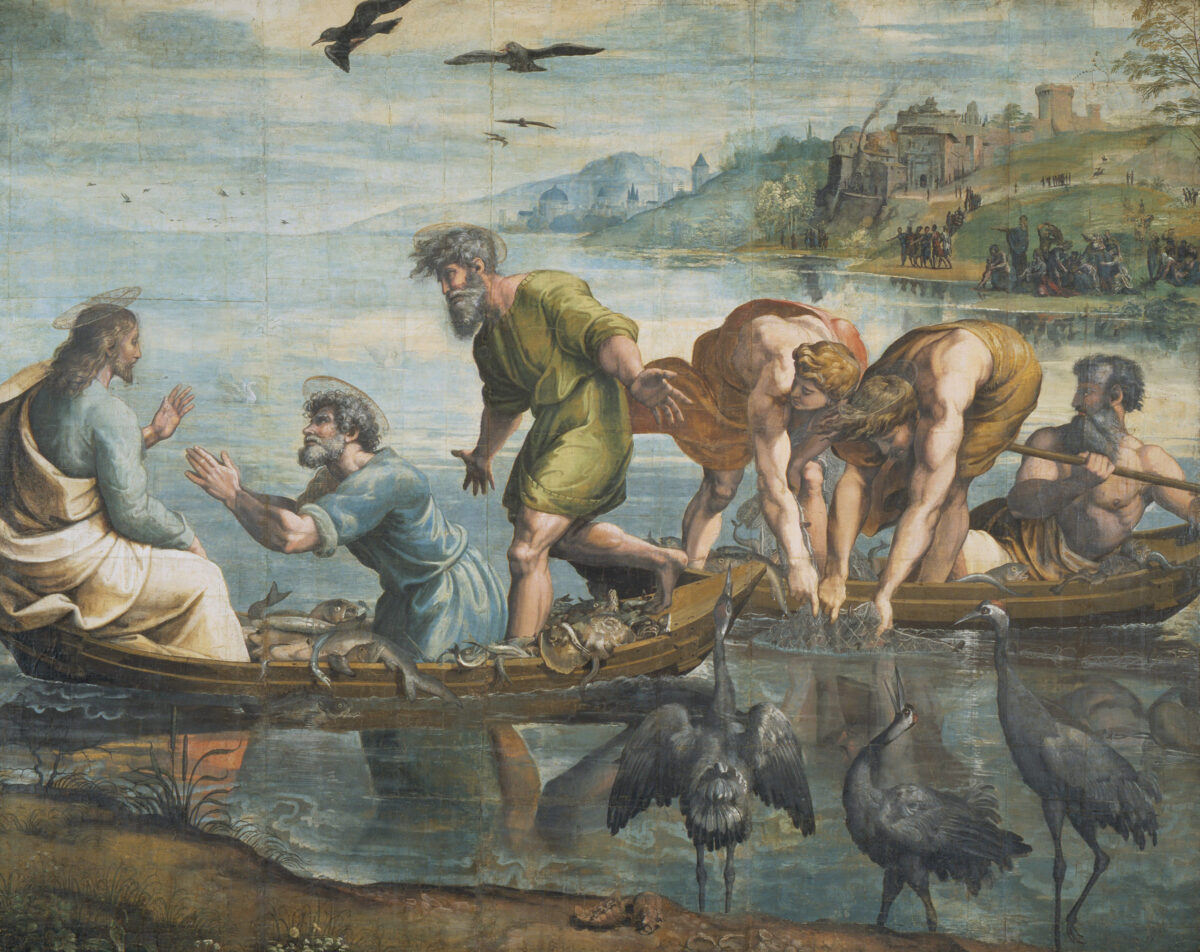 "The Miraculous Draught of Fishes," 1515, by Raphael. Cartoon for tapestry in bodycolor over charcoal on many sheets of paper, mounted on canvas; 11.8 feet by 13.1 feet. Royal Collection. Victoria and Albert Museum. (Public Domain)
Arts & Tradition

Magnificent preparatory sketches that stand on their own
BY Chadwick Hagan TIMEJuly 13, 2022 PRINT

While cartoons in the United States generally refer to humorous or satirical drawings, during the Renaissance era cartoons meant something entirely different: preliminary sketches that served as studies for future work, or perhaps work to be transferred to another medium.

The Raphael cartoons, in this case, preparatory sketches for tapestries, are some of the greatest examples of High Renaissance art found in Europe outside of Rome. They at London’s Victoria and Albert Museum (V&A) and are personal favorites of mine; I have visited the exhibit dozens of times, most recently in March of this year.

The pieces are a set of seven full-scale designs for tapestries, the only surviving pieces of the original set of 10 cartoons. Painted by Raphael (1483–1520), they were commissioned in 1515 by Pope Leo X, who was born Giovanni di Lorenzo de’ Medici, son of the great art patron Lorenzo the Magnificent.

The pope wanted them for his private chapel, also known as the Vatican’s Sistine Chapel. Evidence suggests Raphael began drafting the drawings in 1514. The work was completed between June 1515 and December 1516, as suggested by the first and last payments the Vatican made to Raphael.

A Focus on Detail

Raphael, who was at the peak of his career, began with rough drafts and sketches of figures, using members of his inner circle as models. He was well aware that these tapestries would be seen up close by elite members of society, and it was of the utmost importance to concentrate on extreme detail. He was also aware that his rival Michelangelo would see the work.

In the cartoon “The Miraculous Draught of Fishes,” the scene shows men fishing in Lake of Gennesaret (also known as the Sea of Galilee or the Sea of Tiberia). They are hauling onboard an abundance of sea life including sardines, eels, shellfish, and a shark; ravens fly overhead, an ominous sign of human sin; cranes are on the shore. Jesus, Peter, and Peter’s brother Andrew look on, all crowned with halos. Jesus raises his hand, and, according to the biblical reference, states: “Fear not; from henceforth thou shalt catch men.”

Either Pope Leo X, who commissioned the cartoons, or poet Tommaso Fedra Inghirammi, a close friend of Raphael’s, is depicted wearing a red hat in “Paul Preaching in Athens” on the left of the figure of Paul. A statue of Ares, the god of war, is in the far right. Raphael placed the back of Ares facing Paul to show the new religion of Christianity overpowering the old beliefs of polytheism.

Like pieces of a mosaic, each drawing had many sections and, when completed, the drawings were rolled up and taken to the workshop of Pieter van Aelst in Brussels. From there, tapestry artisans stitched with silk and gold thread, weaving on low-warp looms. Van Aelst’s workshop also made duplicates of the original drawings to serve as guides. The weavers worked from the back and created images which would be reversed in final form.

This arduous process took three years, and the finished tapestries were delivered to the Vatican between December 1519 and December 1521. It is likely that Raphael oversaw and supervised installation of the tapestries in the Sistine Chapel.

Sketches With a Message

The lives of apostles Peter and Paul are the subject of the cartoons and, eventually, the tapestries. The tapestries, “Christ’s Charge to Peter” and “The Miraculous Draught of Fishes,” show Paul’s connection to Christ. “The Death of Ananias” and “The Healing of the Lame Man” portray miracles; and “The Conversion of the Proconsul,” “The Sacrifice at Lystra,” and “Paul Preaching at Athens” depict key elements of Paul’s life.

The tapestries conveyed a special message: Peter and Paul founded the Christian church and their mission was to convert the world to Christianity.

Using the scriptures as a guide, the pope decided on the subjects that Raphael was charged to convey. “Christ’s Charge to Peter” was from the books of Matthew and John; “The Miraculous Draught of Fishes,” was taken from the book of Luke; “The Death of Ananias,” “The Healing of the Lame Man,” “The Conversion of the Proconsul,” “The Sacrifice at Lystra” and “Paul Preaching at Athens” all came from the book of Acts.

Debates have persisted over how much of the cartoons Raphael painted himself. Although the creation of  cartoons and tapestries required collaborative efforts of many artisans as were most large-scale works produced during the Renaissance, Raphael designed and oversaw their execution. According to the V&A, “It is evident that he was directly responsible for the overall composition and most of their execution, supervising and harmonizing the occasional interventions of his assistants.”

Prince Charles (later to be King Charles I) purchased the works in Genoa, Italy, and brought them to England.

Once these cartoons were in England at the Mortlake tapestry factory, copies of the sets were made, and the cartoons then influenced the powerful, famous, and wealthy of Europe. Many of the tapestries created were commissioned by aristocrats for their country homes and for continental European collectors, royals, and ecclesiastical officials.

The tapestries survived King Charles’s execution in 1649 and remained intact in the Royal Collection. It seems Cromwell, who had the king executed, had a soft spot for Raphael’s art and tapestries. Cromwell was rumored to have taken an interest in the tapestry factories at Mortlake.

After the monarchy was restored, William III hired architect Christopher Wren to design a new gallery for the tapestries at Hampton Court. The tapestries moved among royal residences (Buckingham Palace, Windsor Castle, and Hampton Court) between 1763 to 1865.

Eventually, the tapestries made their way to the V&A via Queen Victoria. Her husband, Prince Albert, had devoted much energy to collecting Raphael’s art, and he pioneered a robust collection of the Renaissance artist. In 1865, Victoria provided a long-term loan of the tapestries to the V&A to honor Albert.

The tapestries have remained at the V&A ever since Queen Victoria’s initial bequest.

The Raphael cartoons are on display at the Victoria and Albert Museum, Room 48a, on loan to the V&A from the queen since 1865.

Chadwick Hagan
Follow
Chadwick Hagan is a financier, entrepreneur, author and columnist. He has managed businesses and investments in global markets for two decades. As an author and writer he covers economics, fine art and conservation. He is a fellow of the Royal Society of Arts and is based in Atlanta and London.
SHARE
Friends Read FreeCopyFacebookTweet
You May Also Like