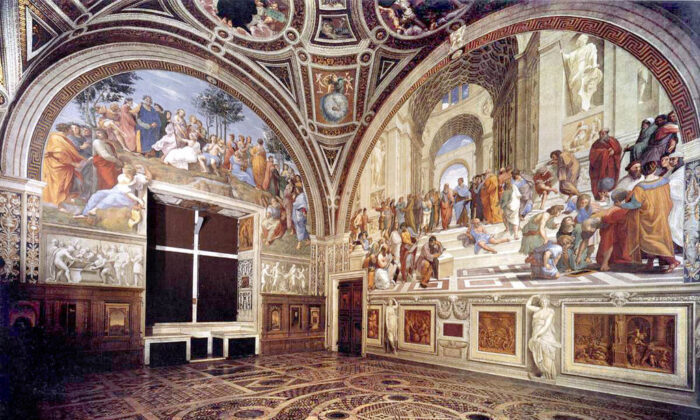 A view of the Stanza della Segnatura, the throne room of Pope Julius II, with frescoes by Raphael. (Public Domain)
Fine Arts & Craftsmanship

Raphael and the Dialogue Between Faith and Reason

In the halcyon days before the pandemic, every day tens of thousands of visitors piled into the Vatican Museums to admire the extraordinary Renaissance art contained therein. Their long shuffle through vast halls would deposit them in the crowded apartments of Pope Julius II, where Raphael Sanzio frescoed the walls from 1509 to 1514. There, many weary tourists would merely snap a quick pic of Plato and Aristotle in the “School of Athens” (also the image on the entrance ticket), then squeeze their way out, blithely unaware that they had been in the presence of the greatest visual dialogue between faith and reason in the history of Western Art.

The Stanza della Segnatura, also known as the throne room of Julius II, was where Raphael exploded onto the Roman artistic scene. The chamber stood at the heart of the new apartments ordered by Julius II after his election in 1503.

An experienced art patron, Julius had considered numerous artists before making the surprising selection of the relatively unknown Raphael to decorate the space where he would greet heads of state as the king of central Italy, as well as his spiritual subjects as the ruler of Western Christendom. (The Protestant Reformation would not begin until four years after his death.)

Raphael was charged with visually evoking the virtue of wisdom, deemed during the Renaissance as the most desirable quality in men of authority. With the assistance of Julius’s idea man, Tommaso Inghirami, Raphael created a visual cornice of sagacity around the pontiff. The walls illustrated the four principal subjects of study in the age: law, philosophy, arts, and theology.

The walls are marvelous to behold, but what captivated Julius and his court were the two large frescoes facing each other across the room. They depicted theology, in the guise of the “Disputation,” and philosophy, represented by “The School of Athens.”  These colorful names were not given by Raphael, who would have known the works as allegories of Philosophy and Theology. Instead, they were by Giorgio Vasari, a painter-turned-historian writing 30 years after the works were done.

Raphael, neither philosopher nor theologian, painted the thinkers, preachers, and scientists proposed by Inghirami, but it was not the cast of characters, used in numerous other works, that catapulted the artist to fame. It was the novel way Raphael placed his figures in the pictorial space that gave meaning and brilliance to the work.

Looking at the painting of theology, one sees that a distinct line can be traced from God at the apex, amid gilt clouds, descending to an open-armed Christ, then to the dove of the Holy Spirit enclosed in a circle of gold, and finally anchored by the monstrance on the altar holding the consecrated Host. This dominant vertical axis portrays the finality of theology, which studies the things of God, as the highest good.

“The School of Athens,” by contrast, is bisected by a horizontal line defined by the figure running in from the left and another rushing offstage on the right, underscoring the pertinence of philosophy in understanding things of this world.

The differing settings of the two works draw out another difference. The philosophers are staged in a grand arcaded structure, which is reminiscent of the massive Basilica of Maxentius in the Roman Forum, the model for the new St. Peter’s Basilica then under construction by Raphael’s relative Bramante. Architecture served as an excellent metaphor for philosophy. As the ancients taught man to dominate and organize his body of space through architecture, so they created philosophy as a means to order their body of knowledge. The space is confined and structured, although it opens out toward the viewer.

Ironically, for a city that contains over 500 churches, the painting of theology has almost no architectural framework. There is a little construction on the left and a few blocks on the right, but the structure of the work is composed of people. Figures stream up the sides like aisles of a church; the seated prophets and apostles form a semicircle resembling an apse, and Jesus, swathed in white, appears as the altar. Behind the monstrance, the landscape stretches out to a seemingly endless horizon. The visual invitation of the image prompts the viewer to follow the lead of the saints and prophets to penetrate further into the mystery of faith. The two settings compare the human development of philosophy versus the divine nature of theology, dependent on God’s revelation.

The most innovative aspect of the two works, however, was Raphael’s placement of figures. He filled either side with almost 60 personages—a remarkable feat. Previously, large groups were simply arranged in rows resembling a photo from a high school yearbook, but Raphael choreographed each figure to orchestrate the eye through the fresco to its culminating point.

In the “Disputation,” the characters at the outer edges are thrust into the viewer’s space. One curious boy leans over a balustrade, while on the opposite side a man gestures to his book. He is a symbol of heresy trying to advance his own ideas. The following figures turn, kneel, reach, and point, inexorably leading the eye to the altar where an elderly man indicates decisively upward.

On the other side, the painting of philosophy is crowned with three curved vaults in perfect perspective, directing the gaze away from the top of the work toward its center. Framed by the central arch, Plato and Aristotle are inserted into the work, almost like a stone dropped into still water. The impact of their thought ripples out among the celebrated thinkers gathered along the top (including Socrates in the olive robe counting out propositions on his fingers).

The figures draw the gaze downward, where the philosophers spill down the steps and appear to pool into separate schools of thought. Euclid maneuvers his compass, surrounded by rapt students. On the left, Pythagoras explains his theorem to the young, old, and even the foreign—the man with the turban is a tribute to the Islamic intellectuals of the School of Cordoba.

Raphael’s depiction of philosophy appears as a flood of knowledge, increasing though the ages, transmitted by teachers to students to our own age. Proud of this achievement, Raphael inserted his own self-portrait on the far right engaged in discussion with Ptolemy and Strabo, perhaps talking about his perspective technique. Raphael, gazing at the viewer, is crowned with a black cap, handsome and charming, unlike his rival Michelangelo featured in the center of the composition in boots and a lavender smock.

Michelangelo was eight years Raphael’s senior and already at work in the Sistine Chapel when the younger artist began this commission. Raphael added the figure of Michelangelo to the finished fresco and cast the taciturn Florentine as Heraclitus the Obscure.  Raphael probably intended the characterization to be a backhanded compliment, as the frumpily dressed figure appears as the picture of melancholy solitude.

In this captivating conversation, Raphael inscribed into the colored stone of fresco the Christian vision of the relationship between faith and reason. Not antagonists, but complementary partners, one discipline is to reveal the wonders of the mortal world and the other to gain insight into the spiritual realm. Even today, Raphael with his grace, charm, and daring creativity invites viewers to join in this timeless dialogue guided by beauty.