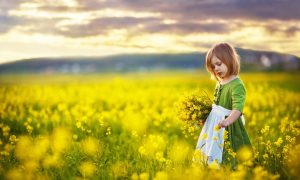 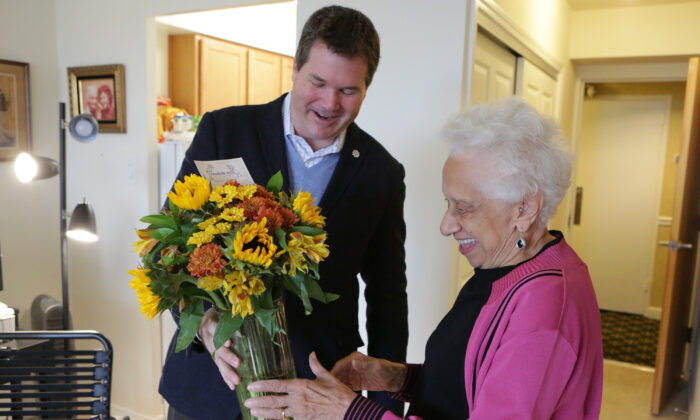 An organization delivers unsolicited flowers, kindness, and a dose of joy
By Andrew Thomas
biggersmaller
Print

In a hectic world, small acts of kindness can make a significant impact on people’s lives. For Larsen Jay of Knoxville, Tennessee, it was after a traumatic accident that he discovered the healing power of flowers.

One summer day in 2007, Jay was working on the roof of his workshop, tarp in hand, trying to fix a leak while his wife was out of town. He had been climbing up and down the ladder repeatedly, but as he ascended to the top for the 15th time, the ladder collapsed. He plummeted face-first toward the concrete.

Jay broke his left arm, left wrist, right elbow, right femur, and nose, and suffered 10 skull fractures. Fortunately, he remained conscious and managed to use his cellphone to call 911. Two days later he woke up in the intensive care unit frustrated, confused, and in immense pain. He could remember hearing screams, yells, and cries.

And then, on the third day, a bouquet of flowers was delivered to him.

To his surprise, the flowers kept coming.

“When I started to dive into that hole of despair, there would be another round of bouquets that would come,” Jay said.

At the end of his first week in the hospital, Jay started to go stir crazy. He eventually convinced his nurses and family to wheel him down the hall. When he left his room he was struck by the sterile and lifeless atmosphere in the hospital. As he roamed the halls, he saw how many other patients were in rooms devoid of color and joy, unlike the “jungle of joy” floral atmosphere of his quarters.

Jay returned to his room and removed all of the cards that accompanied his flowers, and started loading as many as he could onto his wheelchair. The first room he visited was next door, which was one of the places he had heard the disconcerting noises coming from. The patient in the room was a woman who was clearly desperate and exhausted, and he could see it in her eyes. He gave her a large bouquet of flowers, and her reaction was palpable.

When Jay went to the next room, he found a man who was taking care of his wife; she had suffered a fall. He told Jay about how he had been a gardener and described the plants that he had used to grow. Jay handed him one of the plants on his wheelchair.

Jay said that by giving the man something to take care of while he took care of his wife, it was as if he had his garden back.

It would take 13 surgeries and three months in a wheelchair for Jay to begin to recover, and he spent a lot of time by himself. He kept thinking about the interactions he had with the patients in the hospital, and he also wanted to do something to honor the fact that he had survived his accident. He also dwelled on how many of the patients he had met didn’t have anyone to support them.

Jay thought that there must be an organization or group that was delivering flowers to patients in need of an act of kindness. As he researched, he found that nobody was doing what he had done in the hospital in a formal way. One day, he began writing ideas down, and he came up with Random Acts of Flowers. He and his wife officially founded the organization in 2008, a year to the date of his accident.

“In this really ridiculous overcomplicated world that goes so fast and is so technology-driven, it’s the basics that drive humanity. It’s not newsfeeds or technology. It is the core of humanity that is really the most important thing,” Jay said.

Random Acts of Flowers would become Jay’s calling and focus in life.

In July 2011 he encountered a nurse who asked him to deliver flowers to one of her patients. She told him there was a woman at the end of the hall who had been in the hospital for the last two weeks, and she didn’t expect her to live another week.

Jay knocked on her door and popped his head into the room. He told her he had a delivery for her, but she told him that he must have the wrong room. She insisted that he had made a mistake, but he assured her that the roses he had brought were for her. When he handed her the bouquet, her entire aura had changed. Overwhelmed with joy, she grabbed his arm and told him that he was the first man who had ever given her flowers in her life.

This experience was what Jay described as his “a-ha moment,” and afterward decided with his wife to leave their business and run Random Acts of Flowers on a full-time basis.

“The giving of flowers is one of the most universal gestures that cuts across all races, religions, income levels, disabilities—you name it, it doesn’t matter,” Jay said.

One of Jay’s most memorable experiences was delivering floral arrangements at a senior care facility. One of the nurses he knew asked him to get the most fragrant flowers on the cart, and he sniffed around and found a bouquet.

Right before he entered the room, the nurse told him the patient was blind. When he walked into the room, the woman immediately sat up in her chair and exclaimed, “Those are Stargazer lilies!” She had been a gardener and identified them by their fragrance.

“We gave her her garden back. We gave her those memories back,” Jay said.

Not only are Jay and Random Acts of Flowers bringing smiles to patients, but studies have shown that flowers have a positive medical effect on physical and mental health. They can reduce anxiety, lower blood pressure, and improve one’s outlook on life.

Random Acts of Flowers doesn’t pick who receives flowers. Local health care professionals are more familiar with their patients, and know who is most in need of a special delivery.

To date, Random Acts of Flowers has made 550,000 deliveries nationwide, and Jay has never met a recipient who didn’t have a positive reaction to flowers. Jay likes to say that somebody’s life can be changed by somebody else’s garbage, and Random Acts of Flowers donates arrangements used in weddings and funerals, in addition to flowers that would otherwise have gone to waste. Volunteers put bouquets together by hand, and flowers that aren’t suitable for donation are turned into compost.

“Instead of going to the garbage, we can turn it into smiles,” Jay said.